First Baptist has always had strong members whose faith, tested and tried with slavery, Jim Crow segregation, intimidation, violence, and even a devastating tornado, triumphed over all.

Now let us have a little talk with Jesus
Let us tell Him all about our troubles
He will hear our faintest cry, He will answer by and by
Now when you feel a little prayer wheel turnin’
And you know a little fire is burnin’
You will find a little talk with Jesus makes it right.
Warren William “Billy” Young can still hear his father Woodrow’s deep bass voice whenever his home church sings his dad’s favorite hymn, “Just a Little Talk with Jesus.”
“We sang that hymn about three weeks ago, and people couldn’t believe I sounded just like my dad,” he says. “I can hear his voice when we sing that hymn, and sing it just like he did.”
First Baptist Church was the center of family life for the Young family. Billy’s father served as deacon, trustee, and treasurer, and his mother, Alice, as deaconess, senior choir director, and president of the missionary society.
“All the time growing up, I’d only be in three places: home, church, or school,” Young said. Perfect attendance at school and church was expected. Choir was the center of their church life, as everyone in the family sang; later, even spouses and grandchildren joined in. Only one family member doesn’t sing, and that’s Billy’s sister Wanda Young Lowe, who plays the organ. She has been playing for services since she was 11. Each played an instrument, too: saxophone, clarinet, trombone, and trumpet.
As First Baptist prepares to celebrate its 175th anniversary this year, the Young family — the four adult children of the now-sainted Woodrow and Alice Young, and their spouses and children — will all be standing with the choir or seated on the organ bench as they celebrate their commitment to the church their father’s family started in 1845, while they were still slaves.

Established as First “Colored” Baptist Church, it is the oldest black church in Selma and one of the four oldest in Alabama. The church, renamed First Baptist in the 1880s, holds a prominent place both physically and historically in the Selma community. It is the mother church of black baptists in Selma, started the first public and private schools for newly freed slaves, and played a key role in the voting rights movement in Selma, beginning in 1920.
During the 1960s, the Student Nonviolent Coordinating Committee (SNCC), led by now-Rep. John Lewis, set up headquarters at First Baptist and held many nonviolent training sessions and youth mass meetings in its historic building. Lewis leads a congressional civil rights pilgrimage to Selma each March.
First Baptist has always had strong and dedicated members whose faith, tested and tried with slavery, Jim Crow segregation, intimidation, violence, and even a devastating tornado, triumphed over all. It began humbly in the basement of the white First Baptist Church in downtown Selma, where enslaved members organized in 1845 under Rev. Samuel Phillips, who was freed from slavery for his service in the Mexican War. The church after a tornado ripped through.
The Young family’s roots are tied to the founding of the church. Great-Grandmother Amelia came to the United States from Haiti, following a Christian missionary family to their home in Chattanooga. She married a local man and died in childbirth. Her husband sent their daughter, Louise, born in 1893 to Selma to live with relatives and attend First Baptist. She later married Wilson Young, a railroad worker and church member, and their only son, Woodrow, was born March 21, 1916.

After the Civil War, the congregation built its own church and housed the first public school for black children. In 1878, the congregation helped found and house the Alabama Baptist Normal and Theological School, now Selma University, for training black teachers and pastors. The institution had an African-American president beginning in 1881, a rarity as whites led most black colleges at the time. Most of the school’s presidents were also pastors at First Baptist.
First Baptist was mother to Second Baptist in 1869, Green Street Baptist in 1881, and Tabernacle Baptist in 1884. Churches and segregated schools played a key role as safe havens and centers of community and identity for African Americans in Selma.
The growing congregation needed a larger sanctuary, and in 1894, member David Benjamin West designed and built the Gothic Revival-style brick building, the church’s present home. The design was cruciform, with the Victorian-styled sanctuary and chancel raised 8 feet above the first floor fellowship room and housed beneath a steeply pitched cross gable roof. Listed on the National Register of Historic Places, it is considered “one of the most architecturally significant late-19th-century black churches in the state.” In 2018, it was one of four Selma structures named to the watch list of the World Monuments Fund, an organization committed to preserving global historic sites.
Commitment to the betterment of Selma’s black residents, First Baptist members took prominent roles in the community, and the church’s basement floor became a community center for the surrounding neighborhoods. Charles J. Adams, a trustee at the church and World War I veteran, worked on the railroad. Later, as a notary public, Adams served as a de facto attorney for the town’s black residents’ basic legal needs. He helped many black veterans apply for federal assistance often denied them by white bankers notwithstanding the veterans’ qualifications.
Adams was jailed several times, likely because of his advocacy on behalf of black Americans, but despite the obstacles and discrimination, he helped give black residents opportunities that were otherwise unavailable. With Adams’s support, for instance, the Chestnut brothers opened a grocery and meat business, Chestnut Brothers Market and Grocery, in 1936.
Earlier, in 1918, Adams helped found the first NAACP chapter in the state and began organizing for voting rights. Working with Samuel Boynton, who arrived from Tuskegee Institute as the African-American Dallas County extension agent, they founded the Dallas County Voters League in 1920. As late as 1960, even though blacks were 57 percent of the county population, only 1 percent were registered to vote. Boynton and his wife, Amelia, were members of First Baptist. Rev. Fred Shuttlesworth, one of the founding members of the Southern Christian Leadership Conference with Dr. Martin Luther King Jr., served as pastor of the church for two years in the 1950s.
In 1963, under the leadership of Rev. M. C. Cleveland, the church became the first in the city to open its doors for activities and meetings of the Dallas County Voters League. During the next two years, the church was a focal point of the mass meeting and nonviolent teaching sessions sponsored by the SNCC, which located its offices in the church basement. During the early months of 1965, King, Ralph Abernathy, and other leaders of the Southern Christian Leadership Conference spoke nightly to the youth at First Baptist Church.
After the marches, the church continued to serve as SNCC headquarters and a food and clothing distribution center for those who lost jobs while registering to vote.
In 1978, the congregation faced one of its most difficult trials when a tornado tore through the church, collapsing two main walls and stained glass windows. Church leaders, including Woodrow Young, determined to rebuild, despite a cost of over $1 million — one of the largest loans ever made in Selma at the time — all of which the church paid off in just a few years through Young’s leadership as treasurer.
Young, who participated in the teacher-led marches for voting rights alongside F.D. Reese, taught algebra, geometry, trigonometry, and calculus at the local black high school, one of the few in the state offering higher-level math classes. Young was also an adjunct at Selma University, the first black math teacher hired at the integrated Selma High School in 1970, and later taught at Wallace Community College. His teaching career spanned 52 years.

Today, three of the four Young family members worship at First Baptist (the oldest, Marcellus, lives in San Jose, California). Billy is chairman of the deacon board, a position his father once held, and he sings in the choir. Once a teacher in the local high school gifted program, Billy returned to law school — inspired and mentored by First Baptist member and attorney J.L. Chestnut — and today is assistant attorney general with Alabama’s Department of Revenue. 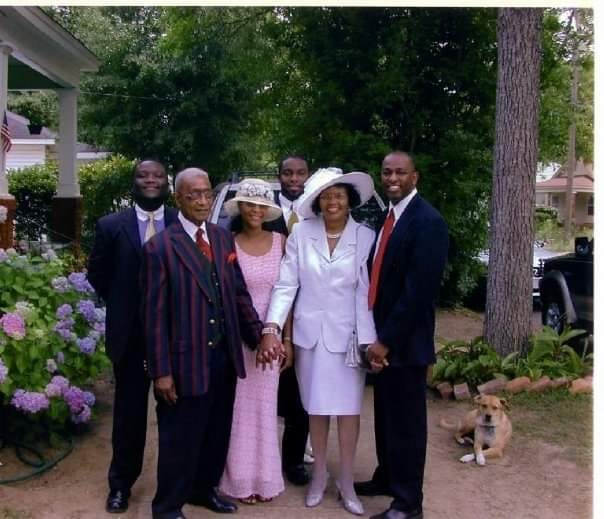 Billy Young’s love for church and for Selma is visible in all he does. He volunteers on several boards, including the Selma/Dallas County YMCA, the local Democratic committee, and his role as vice chairman of the Selma Redevelopment Authority. Committed to helping raise up a new generation of educated and dedicated, young, African-American men, Young is a mentor and leader of several initiatives based at his church.
Founding president of 100 Black Men of America-Selma, Young and his members mentor sixth- through ninth-grade young men in academics and careers, from learning to tie ties to preparing for the ACT. His fraternity, Alpha Phi Alpha, sponsors the Alpha Academy, a tutoring program that meets at First Baptist, and has awarded more than $100,000 in college scholarships to local students.
“The members of First Baptist Church are very concerned with the plight of young people in our community and believe it is the religious community’s responsibility to meet the needs of our youngest citizens,” Young said. “The religious community, and especially the men in our religious community, must do more for young men and must devote more time to interaction with the young men in Selma.”
As someone who grew up having “just a little talk with Jesus,” Young continues the family tradition of love for church and family. “God has been too good to me to not be active in church,” he said. “He has really blessed me, and it’s my responsibility to give back, to help someone like others at my church helped me.”
Christine Weerts, author of "Heroes of Faith: Rosa Young," directs the senior choir at Bethlehem Lutheran Church in Autauga County, Ala., founded in 1922 through the ministry of African American missionary Rosa J. Young. She has degrees in music (BA) and religion (MA) and is a freelance writer.