Authored by Mark Jeftovic via BombThrower.com,

You know who to back by whom the media calls “toxic”

As the pandemic’s grip on society is clearly waning, governments at various levels and locales seem to be sorting themselves into two buckets:

Canada is vast country that is run primarily by left-wing liberals who select their PMs from political dynasties in Quebec and who couldn’t pull it off without the support of urban Toronto (the 416).

The corporate media in Canada is largely homogenous, liberal and unabashedly globalist. To them, anything outside of Toronto or Ottawa is “flyover country”. Anything that happens there doesn’t matter unless it’s some issue that can wrapped within a narrative of victimhood to shame the populace into believing their country is a structurally racist, carbon spewing abomination.

In Canada, a pitched ideological battle between the Liberals and Conservatives would be whether the top marginal tax rate should be 53% (where it is now) or 45%. If things got really wild and bare knuckled, maybe Trudeau would come out with a “double-mask” mandate and Erin O’Toole, a third-rate non-entity who has lost two fat-pitch elections, would say “1.5 masks!” Even then he would waffle as soon as some polling data came out.

That’s the political spectrum in Canada, unless you count the NDPs who are even further left than the Liberals. Federally, the NDPs are led by a millionaire socialist.

The Libertarians here are a joke (sorry, but it’s true. I ran for the Libertarian Party federally in 2015 so I get to say that).

Political leaders actually standing up for the civil rights of all Canadians are few and far between: Maxime Bernier federally, running the PPC, and here in Ontario the likes of Randy Hillier and Roman Baber – a couple of MPPs who were jettisoned from #FordNation for resisting the lockdowns and mandates.

When it comes to these rare political voices, and despite rising popular support for them, the corporate media circles the wagons and demonizes them as (what else?) racists, far-right, etc.

Out of nowhere, comes the truckers

By “nowhere” I mean any place outside of Toronto, the economic hub of Canada where progressivist thinking is dominant and compulsory. Here in the city, bare shelves in the grocery stores are more likely to spark angry calls to the Amazon Prime support desk than any serious introspection on why. There is no awareness that everything  that magically appears on the shelves of Whole Foods, without fail, every day, was grown, farmed, raised, slaughtered, processed and then transported by non-cosmopolitan plebes from backwoods Canada (or US). 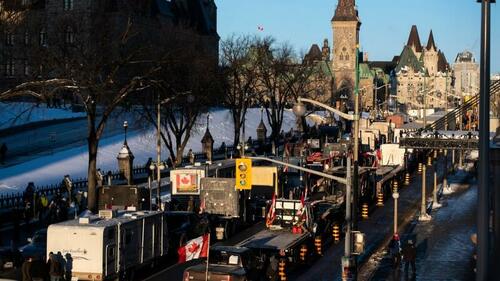 The #FreedomConvoy is on their way to Ottawa to protest vax passports and lockdown tyranny because nobody else will do it.

It was the political opposition’s job, they instead supported it.

It was a mainstream media’s job to examine and question it. Instead they propagandized it.

So it comes down to these (in the eyes of the media) backward, racist, infantile hillbillies, to stand up for constitutionally guaranteed human rights that most Canadians are too cowardly or sycophantic to demand back.

Predictably, Canada’s corporate media, who received hundreds of millions of dollars in rebates, tax credits and funding from the federal government has come out with hostility against the truckers.

CBC, the state funded broadcaster, is even pulling out the “Russian actors” card…

And their pals in Big Tech are helping them.

On the left: a search via Google in a clean browser on Freedomconvoy, on the right, same search via DuckDuckGo.

Note how the entire issue is framed by Google:

If it were up to Google (and it is, when you use them for search), there is no popular support for #Freedomconvoy, everything above the fold is media antagonism and hostile editorial demonizing.

Contrast with DuckDuckGo: which unassumingly pulls in excerpts from websites involved with the convoy itself and its Wikipedia entry.

Which one is biased and trying to shoehorn you into a predetermined narrative? Which one looks to be simply trying to pull in what the user is actually searching for?

For awhile it also looked like the GoFundMe for the Freedom Convoy, which has raised $7.9 million from over 21,000 donors as I write this, was initially going to suspend it and freeze their funds. Fortunately they backed off when they had the beginnings of a major shitstorm on their hands. (Disclosure: I have made a donation to Freedom Convoy)

Trudeau, for his part, when not demonizing fellow Canadians as racists and misogynists will not be on hand in Ottawa to face the truckers (whom he called “fringe”). He’s claiming a community COVID exposure to go into hiding….

The problem with Trudeau’s story is the Ottawa Public Health rules clearly do not call for five day isolation for an asymptomatic community contact accompanied by a negative test. Trudeau is basically lying (and since fled the city….)

Hold your politicians accountable: vote every single incumbent politician out. Anybody who held any office at any level of government in any jurisdiction who was not vocally opposed to lockdown tyranny has to go. Cancel all your mainstream media subscriptions. Turn off your TV.

It’s over and it’s time for anybody and everybody who stands in the way of full restoration of civil and human rights to be held accountable.