I am feeling a bit like the operator of that excavator. There is too much to do and too little motivating progress. 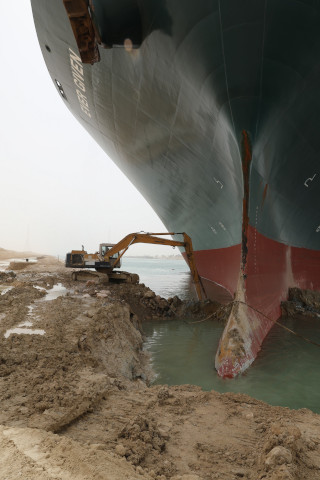 Those are 200,000 metric tons stuck in sand and gravel on both ends. Too much weight for the usual tugs to pull it off. 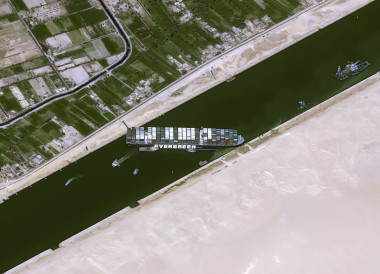 They will probably have to lighten the ship and dredge the sand at both end . That may well take several days or weeks. 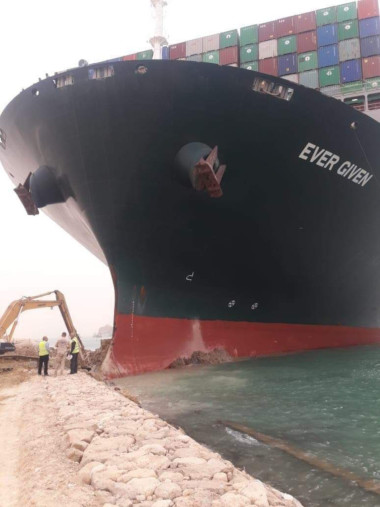 These swimming walls are now too big. They are difficult to maneuver. With this height of the load the slightest gust of wind will move the ship in unintended ways. There was a sand storm in the area when this one got stuck. Unless a crew is extremely attentive and immediately uses the bow and rear thrusters any gust will push it off course. Add the bank effect which sucks the ship towards the canal walls and such an outcome is inevitable.

Water moves differently around a boat in a tight canal than it does in the open ocean. When water gets squeezed between the hull and the sand, the water accelerates, and its pressure drops /2
When the hull gets too close to the bank, the pressure drop sucks the hull in to the bank. This is called the "bank effect." In shallow water, like in the Suez, the stern moves toward the bank, but the bow moves away. The boat spins. /3
The bigger the hull, the more water it displaces, the stronger the effect. The closer the hull is to the bank, the stronger the effect. So big, wide boat = strong bank effect. And container ships are getting HUGE. /4 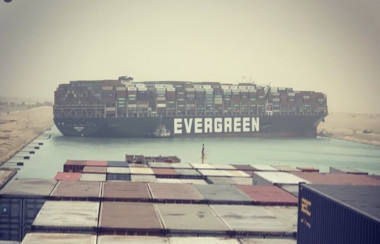 Fifteen years ago I wrote about a record breaking ship I had photographed in Hamburg's harbor:

Find the people on the foredeck. 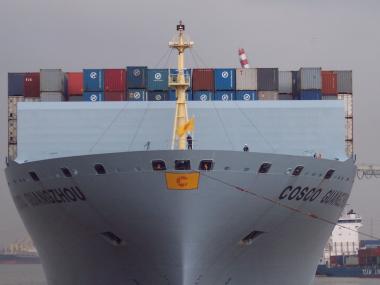 Yesterday the COSCO Guangzhou made her first visit to Hamburg. This harbor fan just had to go down to the river and take some pictures.

There are four more of this type on order and as ship-size always increases, 12,000 TEU ships are already planed. Bigger ships though would not fit through the Suez canal and, due to the wider deck, the loading time might increase too much.

Right now, shipping cost are high with about all available ships worldwide booked. Even though scrap iron prices are up, those nasty scrap-yards have free capacity. Any available rust-bucket (some scary pictures within those PDF-files) is kept afloat.

But worldwide some 2,000 new seagoing ships will be launched this year and with all the new tonnage coming afloat, shipping rates are expected to fall significantly. Stocks for shipping companies are already down.

So maybe those 12,000 TEU monsters will never be build and the COSCO Guangzhou and her sister-ships will be the largest box-carrier to see for some years.

I was wrong with that. The Ever Given now stuck in the Suez canal is 400 meters long and at 20,000 TEU can carry double the load of the COSCO Guangzhou. More of these Suez-Max ships are being build.

Such ships pay $700.000 to pass through the Suez canal. Smaller ones pay less. But the average is some $450,000 and at 50+ ships per day the losses for Egypt add up. The hundreds of ships which are currently blockaded and the owners of their cargoes may also ask for compensation.

The ship is insured for probably up to 140 million. That will not be enough to pay for this incident. Many court claims will be made. The Japanese owners of the ship, the Taiwanese charterer, the German company managing the ship, the pilots and the crew will all be asked to pay for every penny that is not covered by the insurance.

In future Egypt may demand mandatory tug escorts for the passage of such large ships. That would be expensive and put a limit on their cost effectiveness.