There are a reported 119 billionaires attending the Davos confab this year – plus (allegedly) the Donald, who took a day off from Impeachment to address this august gathering of the world’s movers and shakers.
There is also 1500 private jets crowding the surrounding airports – plus the notable train-traveling 17-year old expert on planetary climate science, Greta Thunberg.
Also, among the 10 billionaires in attendance from communist China is Ren Zhenfei, founder of Huawei and father of its CFO, Meng Wanzhou. Even as dad courts the rich and famous on the slopes, daughter languishes in a Canadian jail waiting extradition to the US because she had the audacity to do business with Iran against Washington’s instructions and Trump’s latest fatwa against the Tehran government.
These odd juxtapositions plus countless more got us to thinking about Davos Man himself and the ultimate juxtaposition of our times.
To wit, the combined net worth of the world’s billionaires in the year 2000 was $1 trillion, according to Forbes, but at this bublicious moment that number is reckoned at just under $10 trillion. So the 2,150 members of the Billionaires Club now have more net worth than 60% of the world’s population combined. That’s 4.6 billion people! 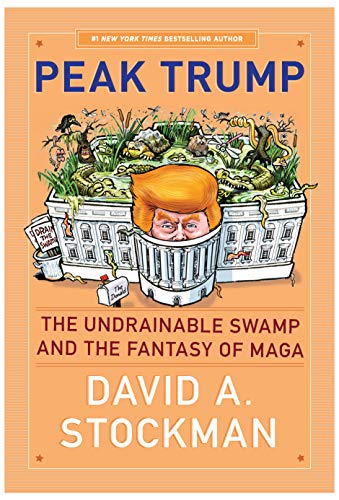 In so noting, of course, we are not joining the Bernie Sanders/AOC/Pocahontas brigade. In a world of free markets, honest money and de minimis government, the more billionaires the better. But what we sincerely doubt is that there was an honest and sustainable basis for a 10X gain in the net worth of the Billionaires Club over a two decade period when the world’s nominal GDP only rose from $35 trillion to $85 trillion, or by 2.4X.
After all, the predominately financial assets comprising the world’s net worth are merely the capitalization of its underlying income or GDP. And there is no basis in either sound economics or basic math for the former to grow nearly four times faster than the latter for two decades running.
Stated differently, unless the age-old laws of sound money have been repealed by the economic gods themselves, Davos Man is fixing to become nearly as rare as Neanderthal Man or, more to the point, has been a case of Piltdown Man all along.
Recall that the latter had been touted by some British scoundrels in 1912 to be a 500,000 year-old homo sapiens and evolution’s missing link. Alas, it was actually a ho-hum 50,000 year-old human skeleton fused with the jawbone and teeth of a modern orangutan.Billionaire Haven 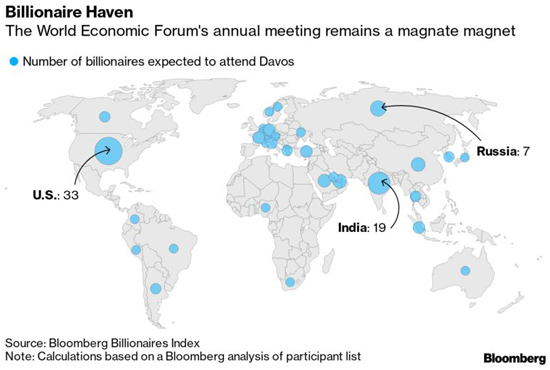 As it happened, it took the world about three decades to figure out that Piltdown Man was a hoax, but the hoax attendant to Davos Man is already plain as day. That’s because by even tolerating Greta’s impending extinction hysteria and the Donald’s hideous Greatest Ever Economy boasts, the assembled billionaires are demonstrating that they are not 4X geniuses after all – just bubble riders on the great central banking hoax of the 21st century.
Indeed, we would suppose that some kind of guilt-tripping would account for the grandly named World Economic Forum’s (WEF) solicitude for the global warming scam and its intellectually pre-pubescent poster girl, Greta. But why in the world would the purported deep thinkers of the WEF not laugh the Donald’s malarkey right off the stage?
On the way to Switzerland he tweeted a superlative that would be the envy of the biggest braggart in the school yard:
“We are now NUMBER ONE in the Universe, by FAR!!…….
And then he thickened the goo while at the podium in Davos:
America’s newfound prosperity is undeniable, unprecedented and unmatched anywhere in the world…America made this stunning turnaround not by making minor changes to a handful of policies but by adopting a whole new approach. Every decision we make…is focused on improving the lives of every day Americans. We are determined to create the highest standard of living that anyone can imagine.”
Folks, that’s just blithering poppycock. We are at the end of the longest and weakest business cycle expansion in history (month # 127), yet real median household income has barely returned to where it stood two decades ago.
The idea that Trump-O-Nomics has anything to do with paving the way for the “highest standard of living that anyone can imagine” is just content free bluster.
The facts actually show that the US standard of living has been stagnant for two decades, rising and falling with the business cycle, but gaining on average the grand sum of $87 per year (2018 $) since 1999.
That’s right. As shown in the graph below, the $63,179 median reported for 2018 is undoubtedly the high water mark for years to come, yet it represented a mere 2.7% gain from the $61,526 level (2018 $) posted way back in 1999.
While the data for 2019 is not yet available, it is evident that the various categories of income gain last year barely kept up with inflation, meaning that real median family income was flat. So the coming recession in the early 2020s will send the black bars in the chart sliding lower as they did during and after each of the recessions marked by the white space. 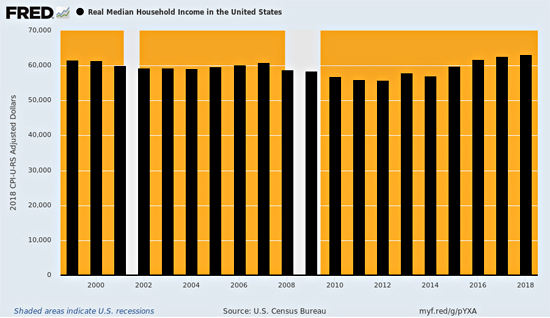 Here’s the thing. The Donald’s policies have immensely harmed the foundations on which today’s tepidly expanding business cycle rests. Yet there has been no short-run benefit in terms of accelerating overall GDP growth, and actually a sharp deceleration of business investment and export growth.
Likewise, the vaunted 70% of GDP attributable to personal consumption spending (PCE) is been essentially kept alive by borrowing.
Nearly 67% of the gain in personal consumption expenditures since Q4 2012, when the US economy had fully recovered from the Great Recession, has been accounted for by household debt growth. The latter (purple bars) is up by a fully $2.4 trillion to a record $16 trillion compared to personal consumption (PCE) growth of just $3.6 trillionduring the same 81 month period.
What the “strong economy” gummers forget, of course, is that sooner or later you have to pay the piper when the economy becomes as debt-ridden as today’s world. You are supposed to actually pay down debt during the up-phase of the cycle, but self-evidently that has not remotely happened this time around the barn.
So you can boast about the Greatest Economy Ever if you are the Donald and reassure about a “solid” economy if you are stock-options rich Davos Man, but that doesn’t gainsay the unsustainable economic and monetary rot upon which it is all based. 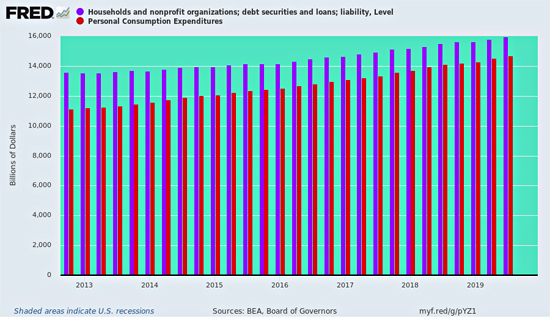 At the end of the day, what the Donald is crowing about is simply the residual momentum of the debt-ridden, growth-impaired economy he inherited, and what the geniuses gathered at Davos are calling a “strong” economy is actually a mere simulacrum of a real business boom – a fiction slathered in artificially and irrationally soaring share prices and stock options
The truth is, we are heading into the strum-und-drang of the Turbulent Twenties, but the alleged adults in the room at Davos don’t have a clue. They apparently think America’s three-decade long fantasy of free lunch economics and unhinged partisan warfare is sustainable indefinitely.
It’s not. If you are sitting on phantasmagorical stock market paper values and not sweating bullets about the implications of the central banks’ $25 trillion balance sheet, the world’s $255 trillion of debt, the Red Ponzi’s monumental malinvestment, the Donald’s war on trade, immigrants and fiscal sanity, the bipartisan war on constitutional government in America, the Empire’s claim to global extraterritoriality and the statist grab for power in the name of a phony climate crisis, then you are not paying attention.
Each and every one of these force vectors are bearing down ominously upon the pathway ahead. But the malignancies of runaway debt and egregiously inflated financial bubbles stand front and center.
Here is a graph of US net worth versus national income (GDP) gains since Q4 2000, and it speaks for itself. To wit:
Needless to say, when the wealth of the top 1% (1.3 million households) is growing at nearly twice the rate of national income and by 11X more than the bottom half of households ( 63.5 million), there is absolutely nothing sustainable about it.
In fact, it’s the reason why the real extinction threat at this week’s confab in Switzerland is not the one Greta is scolding her elders about, but of Davos Man himself.
And if they cannot tell that Trump is the greatest economic charlatan to ever grace high office in the world’s largest economy, they surely well and truly deserve their fate. 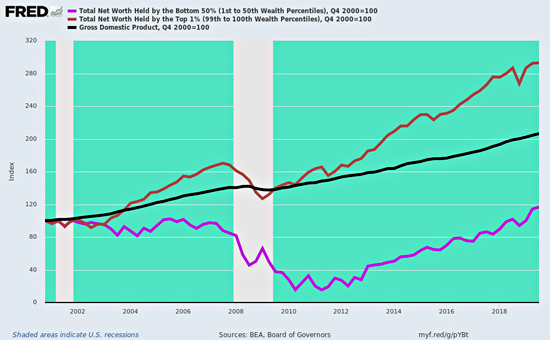 PEAK TRUMP, IMPENDING CRISES, ESSENTIAL INFO & ACTION
Reprinted with permission from David Stockman’s Contra Corner.
The Best of David Stockman
Former Congressman David A. Stockman was Reagan's OMB director, which he wrote about in his best-selling book, The Triumph of Politics. His latest books are The Great Deformation: The Corruption of Capitalism in America and Peak Trump: The Undrainable Swamp And The Fantasy Of MAGA. He's the editor and publisher of the new David Stockman's Contra Corner. He was an original partner in the Blackstone Group, and reads LRC the first thing every morning.
Copyright © David Stockman