Good Riddance and Look Out Below - By David Stockman

There is about to be a changing of the guard in the Eccles Building. That comes straight from the tweeter-in-chief, who actually verbalized his thoughts on the matter during interviews yesterday:


I tell you what, she was in my office three days ago. She was very impressive. I like her a lot. I mean, it’s somebody that I am thinking about......(but) I have to say you’d like to make your own mark.... 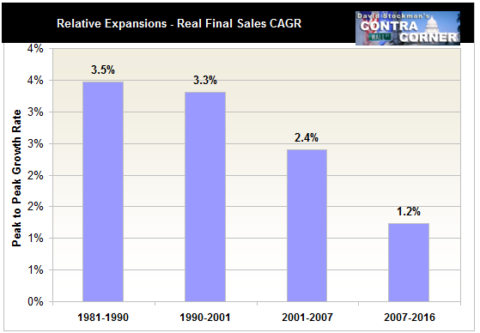 At the same time, the egregious reverse Robin Hood effects of Bubble Finance cannot be gainsaid. Indeed, the chart below constitutes a screaming bill of indictment against our now retiring Keynesian school marm and her cowardly fear of Wall Street.
This is what 100 months of ZIRP, free carry trades, massive yield suppression and the rank idiocy of "forward guidance" (i.e. telegraphing to Wall Street speculators every central bank move, including the exact cusip numbers of bonds to be purchased) has produced. Since the pre-crisis peak, the bottom 80% of US families have actually experienced a shrinkage of their net worth.
Virtually all of the gain has gone to the top 10%. And if you unpeel that onion you would find that the average $700,000 gain per family shown below is heavily weighted by the gargantuan gains of the 1% and even the 0.1% of billionaires among them.
Needless to say, nothing remotely like this outcome would happen on the free market. Honest capitalism, in fact, really does lift all boats.

So we really do mean good riddance to Janet Yellen. She has not only presided over policies that have punished main street workers, savers and businesses while showering the elites with unspeakable windfalls, but has also forced the rest of the world to follow the mad money printing policies of the Fed.
The great problem for her successor---whether it's a crony capitalist Keynesian like Jerome Powell or Milton Friedman's dangerous disciple, Professor Taylor------is that they will have no choice except to crawl off these 5X eruptions of central bank balance sheets (7X in the case of the Swiss central bank).
Needless to say, as the era of balance sheet shrinkage gets fully underway----and even the ECB acknowledged this morning that it will----QT (quantitative tightening) will cause yields to soar in the world's $100 trillion bond market and pricing and valuations for all other financial assets---especially junk bonds and equities----to be reset accordingly.

Here is one depiction of what the Fed's balance sheet might look like going forward during the coming era of QT and demonetization.
It's the reason why no one in their right mind should still be buying the dips.
It's also the reason why a fiscal crisis in the Imperial City is just around the corner---all the more so if they manage to pile $1.5 trillion in tax cuts on top of the $31 trillion in national debt that is already baked into the cake by 2027.
Upon Janet Yellen's leave, it is also the reason why the new watchword should well and truly be expressed in the Donald's own patented style: LOOK OUT BELOW! 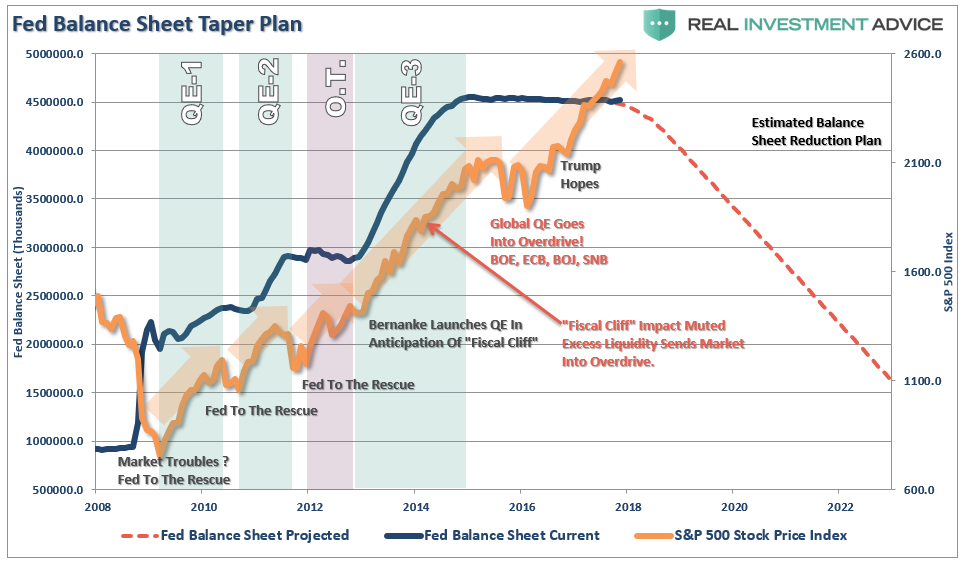