Early this week a few amateur stock trading nerds decided to promote a stock that was heavily shortened by certain hedge funds. The idea was to raise the stock price of Game Stop Corp., a vendor for computer games, by having lots of small stock traders to buy into it. The hedge fund that shortened the stock, and thereby bet on a dropping stock price, would then make huge losses while the many small buyers would potentially profit.

These people, who had joined up in the sub-reddit /r/WallStreetBets, were not driven by greed but by rage against the financial machine:

Instead of greed, this latest bout of speculation, and especially the extraordinary excitement at GameStop, has a different emotional driver: anger. The people investing today are driven by righteous anger, about generational injustice, about what they see as the corruption and unfairness of the way banks were bailed out in 2008 without having to pay legal penalties later, and about lacerating poverty and inequality. This makes it unlike any of the speculative rallies and crashes that have preceded it.

The movement was successful. The stock price of Game Stop Corp. rose from some $10 to over $400 within just a few days. The short seller had to take cover under a larger firm:

Hedge fund Melvin Capital closed out its short position in GameStop on Tuesday after taking huge losses as a target of the army of retail investors. Citadel and Point72 have infused close to $3 billion into Gabe Plotkin's hedge fund to shore up its finances.

Then the system hit back.

What an absolutely extraordinary coincidence of timing that Discord happened to decide the r/Wall Streetbets sub-reddit had too much “hate speech” to tolerate on the same day hedge fund billionaires declared them a huge threat for the crime of winning at their expense!

Next the trading app Robinhood, which many of the amateur traders use, blocked further buys into the stock:

Robinhood, the fee-free investment app that has helped Redditors and other retail investors pump dark horse stocks like GameStop, AMC, BlackBerry, and Nokia, has stopped allowing users to buy those stocks and others YOLO picks.

According to screenshots shared on social media, on Thursday morning a notification appeared on Robinhood telling users that they could close their position on GameStop's stock, but not buy any additional shares. Redditors are currently panicking, looking for ways to transfer their shares of GameStop off of Robinhood to other platforms, and are generally furious at the platform.

In a blog post, Robinhood confirmed that it has placed restrictions on several stocks due to volatility.

"Volatility" = the prols are messing up Wall Street by doing legal stock transactions our overlords do not like. What an irony that a company named Robin Hood is protecting the rich from the poor.

The many people who use Robinhood can now only sell their shares and not buy additional ones:

This is likely to have a massive impact on Robinhood users and ultimately the company. According to a popup on the app's homepage, 56 percent of all Robinhood users own at least some GameStop stock. They are now unable to freely trade it; the app is only allowing users to close out their positions, meaning they can sell it but not buy more. This is potentially devastating for novice investors or those who simply want to follow the general marching orders of the r/WallStreetBets subreddit, which is to hold (and buy more) GameStop stock until further notice.

After Robinhood stopped to allow further buys of Game Stop Corp the stock price crashed from above $450 down to $120. 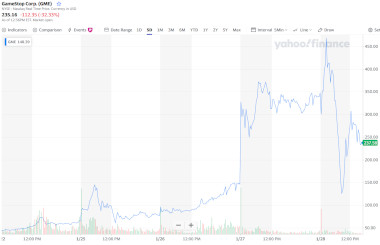 That outright manipulation of the stock markets was noticed and may even have consequences. Unlike Joe Biden it united legislators across the aisle.

This is unacceptable.
We now need to know more about @RobinhoodApp’s decision to block retail investors from purchasing stock while hedge funds are freely able to trade the stock as they see fit.
As a member of the Financial Services Cmte, I’d support a hearing if necessary.

House Speaker Nancy Pelosi will take care that nothing will comes from it. The system has proven again and again that it is rigged. No change to it will be condoned.

The lesson they want us to learn: Don't even think of ever breaking those rules.

Posted by Crush Limbraw at 8:29 AM