Derangement And Danger On The Potomac - By David Stockman

“We must take our own side in this fight. Not as Republicans, not as Democrats, but as Americans,” said Sen. John McCain (R-AZ) before the vote. “Itʼs time to respond to Russiaʼs attack on American democracy with strength, with resolve, with common purpose, and with action.”

The truth is, Russia has no more attacked American democracy than did the North Vietnamese at the Bay of Tonkin or the Spaniards on the Battleship Maine in 1898.
More importantly, no one else in the world thinks Russia is a serious threat—- except the bureaucrats of NATO who make a living concocting such threats; and some itinerate nationalist politicians in Eastern Europe who are never loathe to play the Russian card in their quest for power and attention.
Even the Donald’s own Secretary of State had this to say earlier in the week during his congressional testimony:

“I have yet to have a bilateral, one-on-one, a poolside conversation with a single counterpart in any country: in Europe, Middle East, even South-East Asia, that has not said to me: please, address your relationship with Russia, it has to be improved,” Tillerson said on Tuesday, testifying before the Senate appropriations subcommittee about the proposed State Department budget.

Folks, the point is quite simple. Unless Washington’s bloated and wasteful $700 billionnational security budget is pared back drastically, there is not a snowball’s chance in the hot place of re-
establishing fiscal discipline. As long the GOP hawks and pro-war Dems are pumping massive funding into the Deep End of the Swamp, the will be no cuts in domestic appropriations and no entitlement reforms, either.
Indeed, ever since Ronald Reagan’s mild assault on the Welfare State was decisively turned back on Capitol Hill in the spring of 1981, the “guns and butter coalition” has ruled the roost. And that insidious coalition has taken the national debt from $1 trillion to $20 trillionalong the way—-even has it has locked in an automatic growth to $30 trillion or 140% of GDP by 2027.
That is also why the Deep State and Washington’s bipartisan War Party will not desist until they have removed the Donald from office. And that’s for the unspeakable sin of suggesting that rapprochement with the Russians and Putin makes more sense than the path to war and fiscal bankruptcy that is underway today.
Self-evidently, hell hath no fury like the prospect for world peace and the dismantlement of Imperial Washington’s destructive global empire. A tiny step in that direction was all that General Mike Flynn undertook during his infamous calls with the Russian Ambassador in late December——a welcome initiative for which he was unceremoniously fired and is now under unrelenting prosecution.
But it gets worse. Based on new leaks to the Washington Post it is now clear that the Deep State has used the Flynn Affair and the Donald’s naïve request to former FBI director Comey to “go easy” on Flynn as a pretext for obstruction of justice charges against the President himself:

The special counsel overseeing the investigation into Russiaʼs role in the 2016 election is interviewing senior intelligence officials as part of a widening probe that now includes an examination of whether President Trump attempted to obstruct justice, officials said.
The move by Special Counsel Robert S. Mueller III to investigate Trumpʼs own conduct marks a major turning point in the nearly year-old FBI investigation, which until recently focused on Russian meddling during the presidential campaign and on whether there was any coordination between the Trump campaign and the Kremlin. Investigators have also been looking for any evidence of possible financial crimes among Trump associates, officials said.

In this context, it is truly amazing that the “markets” have not yet woken from their stupor. The drive to unseat the Donald will leave the Imperial City in ungoverned chaos during the interim—meaning an unending crisis over debt ceilings, continuing resolutions and government shutdowns.
Still, perhaps by the looks of today’s sea of red, the whopper told by Yellen during her presser yesterday may finally be sinking in.
Our clueless Keynesian school marm not only falsely claimed “mission accomplished” and that the US economy is heading for the promised land of permanent full employment and unprecedented prosperity. She also claimed that the Fed would soon begin normalizing its balance sheet to the tune of $50 billion per month of bond holdings runoff (i.e. effectively bond sales)—ultimately shrinking its holdings by more than $2 trillion—and that there would be nary a negative ripple effect thereupon.
As we will document further tomorrow, the first part of Yellen’s proclamation is a risible lie. There has been zero net gain in industrial production since September 2007; no net gain in breadwinners jobs since January 2001; and zero gains in real median family incomes since 1989. And that’s permanent full employment prosperity?
But the real whopper was her assurance that the Fed’s balance sheet normalization would be of no more moment than “watching paint dry” on a wall.
Say what?
Surely, Yellen does not mean that the law of supply and demand in the bond market has been repealed—such that $2 trillion of extra supply will not have any impact whatsoever on the price and yield of government debt securities. After all, if that is true when the Fed is selling bonds, why would it not have been true when it was buying them hand-over-fist?
Indeed, by the Fed’s own lights its $3.5 trillion balance sheet expansion after the financial crisis caused bond yields to decline by more than 100 basis points—–and we think that sharply understates the matter because it does not account for the “front-runners” effect.
That is, the hundreds of billions of bond purchased by carry trade gamblers, who were given free overnight funding to the tune of 97% of their investment, in order to by the very same bonds—down to the exact CUSIP numbers—-that the Fed had announced it would be buying.
Stated differently, what was the point of QE if it was not to falsify and suppress bond yields in order to goose economic activity—even if that “stimulus”, as it happened, never really left the canyons of Wall Street?
By the same token, why in the world would Yellen expect that the front-runners who fueled the bond bubble during QE will not find is profitable to short-sell what the Fed will be selling once its balance sheet shrinking campaign gets started?
Needless to say, the 100-300 basis points rise in the 10-year bond year bond yield that would result from the combination of Fed selling and speculators piling on would cause the entire global bond bubble to implode, and all the economic rot that is built upon it to shatter.
How long, for example, would the $2.6 trillion market in junk loans and bonds last under that regime. Given that the Fed’s own action fueled a manic stampede toward yield, the havoc implicit in the chart below is nearly unfathomable. 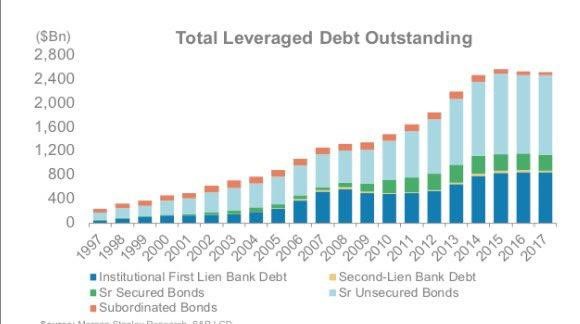 In tomorrow’s installment we will demonstrate how the Fed has actually set up the financial system for the third thundering crash of this century, but has almost nothing to show for it in terms of sustainable main street prosperity.
The fact, is when there are no new breadwinner jobs, there is no gain in living standards or real prosperity. Indeed, Janet Yellen is lost in a Keynesian puzzle palace—–and that is extremely bad news for the casino punters who still refuse to acknowledge the obvious. 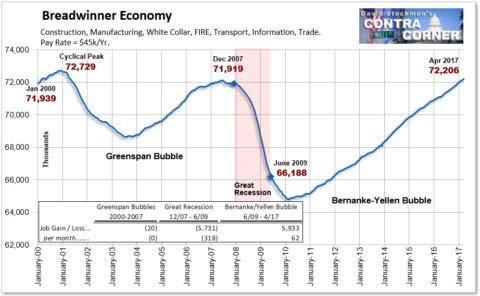 Former Congressman David A. Stockman was Reagan's OMB director, which he wrote about in his best-selling book, The Triumph of Politics. His latest book is The Great Deformation: The Corruption of Capitalism in America. He's the editor and publisher of the new David Stockman's Contra Corner. He was an original partner in the Blackstone Group, and reads LRC the first thing every morning.
https://www.lewrockwell.com/2017/06/david-stockman/derangement-danger-potomac/
Copyright © 2017 David Stockman