Of Two Minds - Keynesian Economics Is an Artifact of Cheap Energy

Printing / borrowing money to generate the unsustainable illusion of "growth" sets up the collapse of the entire Keynesian edifice.
Of the many delusions of modern economics, perhaps the greatest is that the dominant Keynesian model reflects permanent dynamics of advanced economies. Economics, along with other social sciences, makes an implicit claim that its econometric claims are the equal of the "hard sciences" of physics and chemistry.
In other words, the econometrics of Keynesian economics is presented as possessing the same timeless validity of the natural sciences.
The reality is that Keynesianism arose in an era of abundant cheap energy, and it is an artifact of that brief one-off period in which industrialization, consumption and the human population were able to expand by leaps and bounds due to cheap energy and new technologies that leveraged greater value ("work," output) from the cheap energy.
Once energy is no longer cheap or abundant, the Keynesian model of paying people to dig holes and fill them as a means of boosting "aggregate demand" falls apart. In the Keynesian model, "growth" as measured by consumption (gross domestic product) is assumed to be permanent and the highest goal of any economy.
If an economy starts contracting (i.e. recession), the one-size-fits-all solution in the Keynesian model is to boost consumption, i.e. "growth" by any means available: paying people to produce no useful output (building bridges to nowhere, etc.), distributing newly created money via "helicopter drops" into consumers' laps via tax rebates, tax cuts, increased social welfare spending, etc.
This "solution" implicitly assumes the energy needed to fuel this unproductive labor, investment and consumption is permanently abundant and cheap. It also assumes that the quantity of energy available to fuel the economy will always expand, and as a result new currency ("money") can be issued by central banks with few (if any) constraints.
The connection between currency and energy is: "money" is nothing but a claim on future energy. Without energy to power the future economy, the "value" of "money" vanishes.
As a result, printing/borrowing vast sums of new money into existence when the supply of affordable energy is stagnating leads to inflation/ loss of purchasing power as the expanding supply of money is chasing a stagnating quantity of energy and what requires energy to generate output, i.e. the vast majority of the economy.
We have a test case for how well the Keynesian model works in periods in which energy is scarce and costly. That test case is the 1970s, the era of stagflation: as governments and central banks pumped freshly created money into the economy to generate "growth," what they got wasn't "growth"--they got inflation and stagnating output and consumption.
The Keynesian model failed to work as advertised. The reason is obvious: the model is an artifact of an era of cheap, abundant energy, as it only functions when energy is cheap and abundant.
In effect, the Keynesian model of how the economy works was saved by the discovery of super-giant oil and gas fields in the 1970s that expanded oil production and dramatically lowered the cost of energy for the rest of the 20th century.
The Keynesian illusion was again saved in the early 21st century by the widespread application of fracking technologies that boosted supply and suppressed the cost of energy.
But fracking is not the equivalent of bringing new super-giant oil/gas fields into production. Where super-giant fields produce for decades, fracked wells deplete very quickly--two or three years.
Fracking is even more capital-intensive than the horrendously capital-intensive super-giant fields. Fracking is an artifact of cheap capital in much the same way that the Keynesian model is an artifact of cheap abundant energy: without an essentially limitless supply of cheap, abundant credit, fracking would not be feasible.
Even with unlimited cheap credit, fracking makes no financial sense at today's relatively modest energy prices; the fracking sector has famously burned $500 billion, i.e. the sector has lost $500 billion providing energy at today's prices.
This consumption of capital in service of affordable energy is not sustainable.
The Keynesian model makes another implicit assumption: that technology + cheap abundant energy will always generate increasing productivity: in other words, the same quantity of inputs (energy, labor, capital) will yield greater outputs due to rising productivity.
But as this chart of productivity illustrates, productivity is in a long-term secular decline. Productivity is a proxy for cheap, abundant energy as well as for technology. Clearly, technology alone is not the driver of increasing productivity. Despite tremendous advances in various technologies, broad measures of productivity are in secular decline. 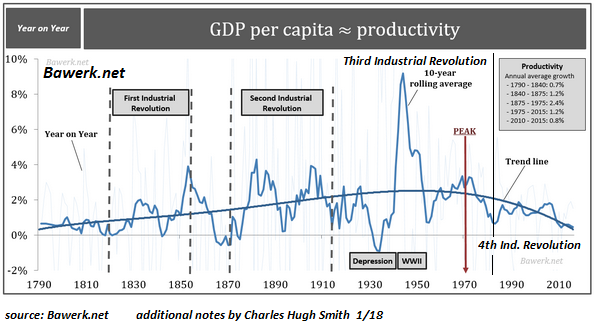 The secular decline in productivity has puzzled mainstream economists who expected productivity to increase at the same rates logged in previous eras. This trend is complex and can't be distilled down to one cause, but the point here is that "growth" is ultimately dependent on rising productivity: printing / borrowing money to generate the unsustainable illusion of "growth" sets up the collapse of the entire Keynesian edifice.


If you found value in this content, please join me in seeking solutions by becoming a $1/month patron of my work via patreon.com.