MoA - Venezuela - The U.S. Game Plan For 'Regime Change' And How To Respond To It

Yesterday the U.S. recognized a right-wing 'leader of the opposition' in Venezuela Juan Guaido as the president of the country. A number of right-wing led countries in South America joined in that move. Cuba, Bolivia and Mexico rejected it. Russia, China, Iran and Turkey continue to support the the government of the elected President Nicolas Maduro and spoke out against the coup attempt. The European Union has no united opinion with the neo-liberal led France being pro-coup and Spain standing against it.

Venezuela must prepare for a multi year conflict while doing everything to keep it as short as possible.

This long planned U.S. move against the legitimate government of Venezuela is just the start. It is designed to lead to escalation and very soon mission creep - 'We can't stop here!' - will set in. More than 300 billion barrels of oil, the biggest oil reserves in the world, are at stake. U.S. stooge Guaido promises to change Venezuela's oil law to the advantage of the U.S., while the Bolivarian government uses the oil to support the poor.

The game plan for the current U.S. regime-change operation against the government of Venezuela was written by Senator Marco Rubio with the support of Vice President Pence:

The American recognition of Mr. Guaidó as Venezuela’s legitimate president is far more than a symbolic measure, and presents new complications for Mr. Maduro.

The idea was avidly promoted by Senator Marco Rubio, a Florida Republican who pushed the Trump administration to take such a step. In a speech to the Senate on Jan. 15, Mr. Rubio said that designating Mr. Guaidó as president would allow millions of dollars of Venezuelan government assets frozen in the United States to be at the disposal of opposition lawmakers, who could use them to fund new elections or humanitarian assistance.

The real amount the U.S. and Britain have 'frozen', or practically stolen, from Venezuela amount to several billion dollars, not just a few millions. Such 'freezing' of money owned by governments the U.S. does not like has become all too common. Together with a raft of other sanctions the economic war the U.S. has long waged against the country made the recovery of the Venezuelan economy nearly impossible.

As the U.S. is now likely to confiscate all money that is supposed to flow to Venezuela the country must stop its oil-exports to the United States. A number of U.S. refineries, some owned by Venezuela, depend on the special grade of Venezuelan oil and would soon run into trouble. That could help to change the mood in Washington. China may be interested in buying more Venezuelan oil.

The opposition in Venezuela will probably use access to that 'frozen' money to buy weapons and to create an army of mercenaries to fight a 'civil' war against the government and its followers. Like in Syria U.S. special forces or some CIA 'contractors' will be eager to help. The supply line for such a war would most likely run through Colombia. If, like 2011 in Syria, a war on the ground is planned it will likely begin in the cities near that border. But before a military conflict is launched the U.S. and the opposition in Venezuela will try other paths.

After the U.S. announcement Venezuela's president Maduro ordered all U.S. diplomats in Caracas to leave the country within 72 hours. As the U.S. no longer recognizes Maduro it rejected that. U.S. Secretary of State Pompeo announced to "conduct our relations with Venezuela through the government of interim President Guaido." The rejection was most likely planned and is supposed to provoke a too harsh reaction like a storming of the embassy.

Under a normal process the Venezuelan government would now arrest the U.S. diplomats as soon as they leave the legally protected embassy compound. They would be put on a plane and evicted from the country. But it seems likely that U.S. planned for this conflict and that the diplomats are prepared to stay in the embassy for a long time.

The best for Venezuela to do now is to simply isolate the embassy. It must be well guarded to prevent false flag attacks against it. No visitors should be allowed. All the embassy's communication lines should be cut (it would still have satellite communication) and electricity and water should be rationed. Humanitarian aid should be conceded only after specific requests. It is important to play this 'by the book' so that the U.S. can not use the issue to escalate.

The 'opposition leader' Juan Guaido committed treason. He, his staff and the people behind him must be found and imprisoned. They should be held in reasonable conditions but under strict military guard.

Before starting a larger war the opposition will try to create unbearable chaos on the streets. Like during the failed violent demonstrations in 2016 the opposition rioters will be armed. Police will be attacked and people on both sides will die. The probably best way to keep this at a tolerable level is to snatch away those who are armed and violent. The police will need good ground level intelligence to achieve that.

The U.S. seems prepared to see the coup through unless it has negative consequences for its own position. Domestically the illegal regime change attempt has support even from supposedly 'socialist' Democrats. The U.S. propaganda apparatus, the mainstream media and various propaganda 'bot' campaigns are fully engaged. The supposedly private social media companies in the U.S. - Facebook, Instagram and Twitter - have already de-recognized the official Maduro accounts. They no longer have a 'verified' tick mark. Voice of America shows(vid) Guaido declaring himself president among a crowd of a few hundred supporters. It then (1:05min) cuts to a much larger crowd at a different location falsely suggesting that he has a large following.There are trucks with anti-Maduro advertisements driving in U.S. cities and various propaganda accounts post false pictures or make otherwise false claims. This sudden change of location is cute in its fatuity: 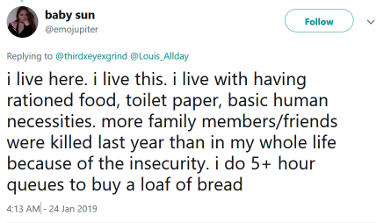 link - bigger
The Venezuelan government should consult with Syria and Russia on how to win such a conflict. The most important step Maduro has to take is to shore up his ground support. While the Bolivarian movement under Chavez and now Maduro still has a large backing, it lost some support from the poor due to the economic malaise after the fall of the oil prices. The situation is to some extent caused by U.S. sanctions but a significant part is also caused by misguided economic policies and corruption. The billions of credits and investment brought in by Russia and China have not been put to good use.

A well concerted anti-corruption campaign will help to increase the public support and will give China and Russia more confidence to stick to the legitimate government.

Another step must be an early dialog with reasonable parts of the opposition. While lots of people may not like the Maduro government many of them will disagree with the obviously U.S.-led intervention. These people can be won over. The Catholic church could be asked to mediate talks with them.

The Venezuelan military has promised to support its elected president. He should use it to react early against any attempt of violent escalation. The lesson to learn from the conflict in Syria it is that a prolonged conflict will cause more casualties and damage than an early, sharp and thereby decisive reaction to an incubating war.

I am confident that Venezuela and its people can resist this onslaught. But the government needs to respond rationally and decisively. It must consult closely with its major allies and plan for a prolonged conflict.