What Killed the Middle Class? - by Charles Hugh Smith

If the four structural trends highlighted below don't reverse, the middle class is heading for extinction.
Everyone knows the middle class is fading fast. I've covered this issue in depth for years, for example: Honey, I Shrunk the Middle Class: Perhaps 1/3 of Households Qualify (December 28, 2015) and What Does It Take To Be Middle Class? (December 5, 2013)
This raises an obvious question: what killed the middle class? While many commentators try to identify one killer cause (for example, the U.S. going off the gold standard in 1971), the die-off of the middle class is more akin to the die-off in honey bees, which is the result of the interaction of multiple causes (factors that increase the toxic load dumped on bees and other pollinators by modern agriculture).
Longtime collaborator Gordon T. Long and I discuss the decline of the middle class and other key topics in a new 29-minute video How did that work out for you?
So where do we begin this detective story? With the engine of all real prosperity, productivity. This chart reveals that wages stopped rising with productivity around 1980. 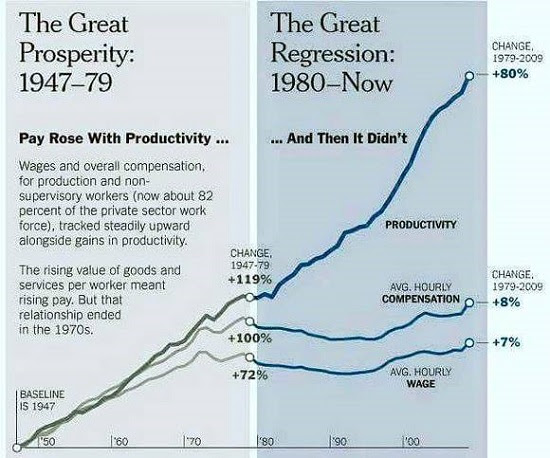 (See other charts and read full text at link below)

There is no way middle class households with declining real incomes can pay soaring costs imposed by state-enforced cartels and gain ground financially. If the four structural trends highlighted above don't reverse, the middle class is heading for extinction, the victim of financialization, the glorification of financial speculation via central bank-central state policies, the decline of productivity and rising costs imposed by state-enforced cartels.

Posted by Crush Limbraw at 6:39 PM