WeDaPeople – America First? Maybe – and only with some! Most folks say: It’s all about me? (More about this later)

Doug Casey explains: ‘’The Deep State is an extremely powerful network that controls nearly everything around you. You won’t read about it in the news because it controls the news. Politicians won’t talk about it publicly. That would be like a mobster discussing murder and robbery on the 6 o’clock news. You could say the Deep State is hidden, but it’s only hidden in plain sight.”

Empire ‘uber-alles’:
“…. Empire First dominates our foreign policy, because there’s so much money flowing into the Pentagon, the 17 intelligence agencies, and the rest.
That money is also going to the tens of thousands of people who are getting paid big salaries to work as contractors for the NSA and other agencies. They form a built-in lobbying force of tremendous effectiveness to keep the funds flowing.
When you add to that all of the think tanks that get money from the State Department, the National Endowment for Democracy, and various pockets and crevices in the Pentagon that no one can even keep up with, essentially you have what I call the equivalent of a self-licking ice cream cone.”

Why? Empires are expensive!
“Instead of keeping faith with the promise that was made to Gorbachev by Secretary of State Jim Baker and George Bush the elder—that NATO would not expand a single inch to the east—instead, we basically encircled the entire rump state of Russia that was left after the Soviet Union fell apart. That has then led to the case for a military budget this year of $750 billion, when the truth is a homeland defense would cost less than $250 billion.”

“The thing just keeps going because it’s so big it feeds itself—the $750 billion defense budget is just the beginning. That’s the Department of Defense budget per se, but if you add in another $25 billion for nuclear energy programs at the Department of Energy, $50 billion for security assistance and foreign aid, international relations, another $60–70 billion for Homeland Security, and then the veterans’ budget, which is $200 billion, it’s just massive. It represents the deferred cost of all these stupid wars that we’ve had and didn’t need.
Altogether we’re talking about a $1.1 trillion budgetary monster that creates these enormous flows of dollars that want to perpetuate themselves.”

Who profits from these wars? Shhhhhh…..!
“The reason poverty, war, and political tyranny are beyond my control is because powerful people have too much at stake to allow anyone or anything to get in their way. Let’s get real here: Poverty, war, and political power are extremely profitable businesses, and if the ruling class believes you’re a serious threat to its agenda, you might just end up ………….” – Robert Ringer

How did we get here? Everything you and I learned and knew about America in the 20th century - AINT so! – a LONG read!

What about the 545 elected members of Congress that WeDaPeople elect?
“The only comprehensive and scientific study which has ever been done of whether the U.S. is a democracy or instead a dictatorship, was published in 2014. It studied the period during 1981 through 2002, and it found that, “In the United States, our findings indicate, the majority does not rule — at least not in the causal sense of actually determining policy outcomes.”
“The preferences of the average American appear to have only a minuscule, near-zero, statistically non-significant impact upon public policy.”

What about DaConstitution?
It’s sorta like with DaBible – quote it when it’s convenient and ignore it when it ain’t! Besides, who believes what it says anyways?

“The U.S. Constitution is just an arbitrary piece of paper… entirely apart from the fact the whole thing is now just a dead letter. You have a right to free speech and to be armed because they’re necessary parts of being a free person, not because of what a political document says.
Even though the essence of the State is coercion, people have been taught to love and respect it. Most people think of the State in the quaint light of a grade school civics book. They think it has something to do with “We the People” electing a Jimmy Stewart character to represent them. That ideal has always been a pernicious fiction, because it idealizes, sanitizes, and legitimizes an intrinsically evil and destructive institution, which is based on force. As Mao once said, political power comes out of the barrel of a gun. But things have gone far beyond that. We’re now in the Deep State.” – Doug Casey

So who are WeDaPeople? Danged if I know!
“The question comes down to this: Is the fragile American experiment in republicanism begun in Philadelphia in 1787, which required a commonly-shared understanding of basic principles, now over, or at the very least is it entering its agonizing death throes?” - Is It Time for America to Break Apart?

How did we get here? 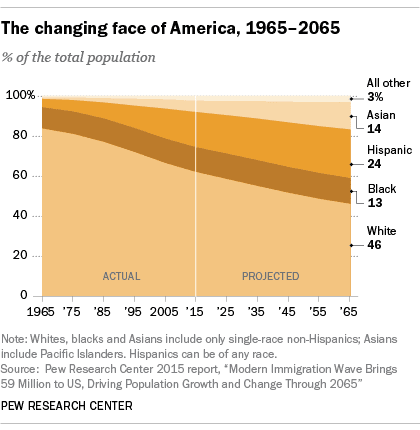 That isn't a graph of "the changing face of America". That is a graph of America being transformed into Not-America, all thanks to one man, Emanuel Celler. – and passed into law by Congress!

The "two Americas" to which the author refers are not, in fact, two Americas. There is a white Christian America and there is a not-white not-Christian not-America which are now locked into an existential struggle. The USA is now divided into a New World remnant of Christendom and the stronghold of Satandom. The latter wishes to conquer and destroy the former because it is a separate nation that worships the god of this world rather than God the Father of Jesus Christ. – Vox Day

The USA is presently facing its own October Revolution right now, one that has been decades in the making. And many of those seeking to complete the destruction of Christian America and rule over a USSA are the literal descendants, intellectually, ideologically, and genetically, of the very Bolsheviks who subjected Christian Russia and Christian Ukraine to 70 years of persecution and suffering.

(1) Either there must be some large mass conversion of one side or the other (a ‘Road to Damascus’ conversion?), probably occasioned by some immense and earth-shaking event, war, depression, disaster; or (2) there must be a separation into independent jurisdictions of large portions of what is presently geographically the United States, including possible massive population exchanges—this separation/secession could be peaceable, although increasingly I think it would not be; or lastly, and worst, (3) the devolution of this country would continue into open and vicious civil and guerrilla war, followed by a harsh dictatorship.

Scenario (3) is a near-certainty simply because virtually no one who is even potentially on the side of the Christian Nationalists is currently capable of recognizing the situation, much less doing anything about it. And as Sun Tzu observes, those who know neither themselves nor their enemies almost always lose.

So what do we do?
“No, don’t hide in a cave – ‘simply start building something better’ – right within your own family, friends and community. Become informed – read and analyze – challenge your own long held beliefs. Do they hold up to careful scrutiny? Are you stuck with pre-suppositions that cloud every interpretation of new information? We will get into some serious confrontations here with our long held opinions that we consider to be factual. You think I am kidding? If you begin to diligently read and research the Limbraw Library here, as well as other sources - carefully compare and contrast the content - you will come to the conclusion that almost ALL of  what you learned in public school and DaEveningNews about the 20th century, for example, was not just usual national propaganda - it was outrageous LYING by our political leadership! In the last 15-20 years, I have come to admit that I have had to change almost everything I had accepted as gospel truth - it is quite humbling!”

If I had all the answers I’d be lying, but I had to start somewhere - http://www.crushlimbraw.com/ - it’s a work in progress and with the grace of Almighty God, we’ll git’er’done – or our descendants will. There are many others as well – most of whom we’ll never meet or know – but they’re out there!
“Expect to meet resistance and ridicule, often from your family and friends. It comes with the territory.”
All I promise is ‘blood, sweat and tears’! At worst – whoever survives will be here to pick up the pieces!

Posted by Crush Limbraw at 1:18 PM