Benford's law - Infogalactic: the planetary knowledge core (Be sure to bookmark Infogalactic for honest information! - CL)

From Infogalactic: the planetary knowledge core
Not to be confused with the unrelated adage Benford's law of controversy. 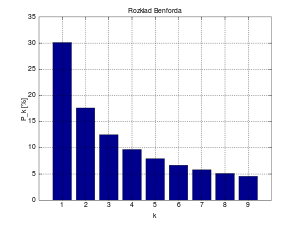 The distribution of first digits, according to Benford's law. Each bar represents a digit, and the height of the bar is the percentage of numbers that start with that digit. 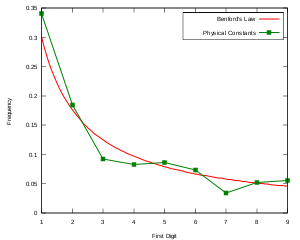 Benford's law, also called the first-digit law, is a phenomenological law about the frequency distribution of leading digits in many (but not all) real-life sets of numerical data. The law states that in many naturally occurring collections of numbers the small digits occur disproportionately often as leading significant digits.[1] For example, in sets which obey the law the number 1 would appear as the most significant digit about 30% of the time, while larger digits would occur in that position less frequently: 9 would appear less than 5% of the time. If all digits were distributed uniformly, they would each occur about 11.1% of the time.[2] Benford's law also concerns the expected distribution for digits beyond the first, which approach a uniform distribution.

It has been shown that this result applies to a wide variety of data sets, including electricity bills, street addresses, stock prices, population numbers, death rates, lengths of rivers, physical and mathematical constants,[3] and processes described by power laws (which are very common in nature). It tends to be most accurate when values are distributed across multiple orders of magnitude.

The graph here shows Benford's law for base 10. There is a generalization of the law to numbers expressed in other bases (for example, base 16), and also a generalization from leading 1 digit to leading n digits.

It is named after physicist Frank Benford, who stated it in 1938,[4] although it had been previously stated by Simon Newcomb in 1881.[5]