Several weeks ago I had to drive west on the Pennsylvania Turnpike to pick up my son after his sophomore year at Penn State. I’ve made this trip a dozen times over the last few years, since this is my second son attending Penn State, with a third starting in the Fall. It’s a tedious, boring, protracted, four hour trek through the rural countryside of the Keystone State. During these trips my mind wanders, making connections between the landscape and the pressing issues facing the world. I can’t help but get lost in my thoughts as the miles accumulate like dollars on the national debt clock.
More often than not I end up making the trip in the midst of bad weather. And this time was no different. The Pennsylvania Turnpike is a meandering, decades old, dangerous, mostly two lane highway for most of its 360 mile span. Large swaths of the decaying interstate are under construction, as the narrative about lack of infrastructure spending is proven false by visual proof along the highways and byways of America.
The real infrastructure crisis is below ground in urban shitholes where 100 year old water and sewer pipes fail on a regular basis, but bankrupt Democrat politicians divert their steadily declining tax revenues to bloated pensions of government lackeys. Infrastructure spending is only interesting to politicians if they can name it after themselves and have a ribbon cutting ceremony. Replacing water and sewer pipes before they explode isn’t sexy, so it won’t be done.
A winding two lane highway, with a speed limits of 70 mph, and jam-packed with 18 wheelers driven by sometimes sleepy and often aggressive truckers already leads to a pressure packed few hours. Add rain to the mixture and you ratchet up the blood pressure. Ramp that up to torrential downpours and heavy fog and you’ve got white knuckles, strained neck muscles and an occasional prayer regarding that big rig crawling up your ass. I was lucky enough to be faced with torrential rains and fog for the first two hours of the trip. I was tense, cautious, concerned and careful. 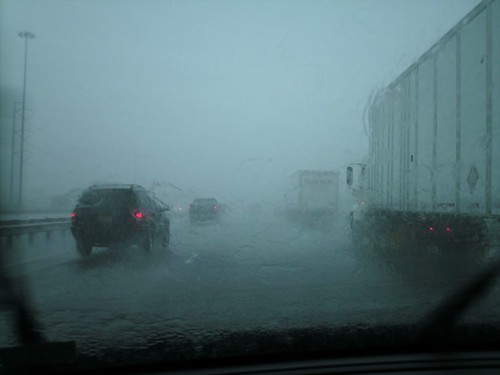 It is duplicitous for supposedly highly educated central bankers, financial “experts”, and journalists to pretend inflation is under control and jobs are plentiful when the evidence of economic contraction is everywhere. GDP, even using a fake inflation adjuster is still in the toilet, running below 2% when everyone knows 68% of it is generated by consumer spending. A record number of retail store closings and retail bankruptcies is baked in the cake for 2017, worse than the recession of 2009.
Restaurant sales have been falling for sixteen straight months. Auto companies have leased or loaned a car to every person in America that can fog a mirror and scratch an X on a lease or loan document. Auto sales are starting a multi-year decline as loans go bad in record numbers. Should that be shocking when the average financed amount has risen to $29,000 and the average loan term now exceeds 67 months – both record highs.

At least 25% of all student loans are in default. The taxpayer is going to be on the hook for hundreds of billions in loan losses. The heavily indebted millennials with lousy jobs are not boosting the economy by spending money they don’t have. They can’t buy houses and are stuck living in their parent’s basements. Broke Boomers are being forced to work in retirement and restrict their spending since they saved virtually nothing for their retirement years. Gen Xers are caught in the middle, supporting their kids and their aging parents. It’s the perfect storm.

So even though I and numerous other thoughtful, honest bloggers (Zero Hedge, Jesse, Hussman, Martenson, Stockman, Charles Hugh Smith, Denninger, and dozens of others) have documented the dire circumstances facing the nation, central bankers at the behest of their Deep State masters, have engineered the stock markets and high end real estate markets to all-time highs, as their looting and pillaging scheme accelerates.
My frustration and disillusionment with a world gone mad has begun to affect my mental state. I’m losing my sense of outrage which has driven me to write for the last nine years. It isn’t worth the expended energy when it will change nothing. I’m resigned to the inevitability of economic collapse. It’s just a matter of when. Bloggers and writers who make a living at it, must write daily articles of doom to generate page views. Since no one can reliably predict the timing of the collapse, I’ve grown tired of reading and writing the same old shit.
The analogy between driving on the Pennsylvania Turnpike during bad weather and my mental state is useful in understanding where I see things headed. There is danger lurking around every bend in the road. Construction zones suddenly appear forcing you to change course in an instant. Aggressive drivers tailgating and weaving in and out of traffic create havoc. Sleep deprived truckers let their big rigs drift into your lane, with no room for you to maneuver away.
When you enter the three separate tunnels through Blue Mountain and its brethren, you feel claustrophobic as if the walls are closing in and there is no way to escape. During torrential downpours I’ve navigated during multiple journeys to and from Penn State, the pure terror of not being able to see 50 feet ahead while hydroplaning on a flooded roadway with an 18 wheeler in the lane next to you is hard to describe. 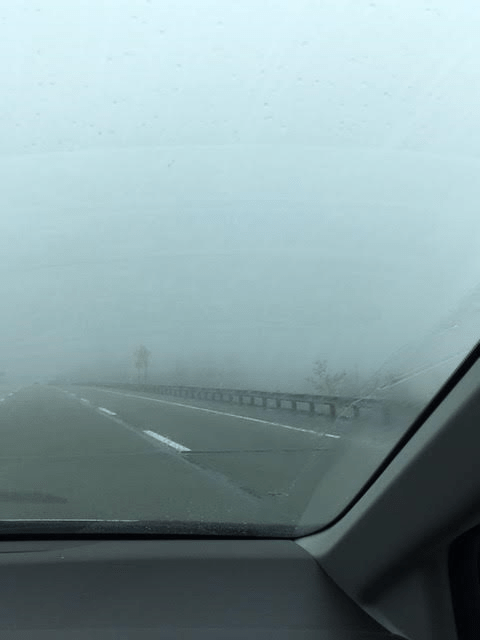 The road directly ahead is blanketed in the fog of uncertainty. Anyone declaring they know what will happen in the near future with any level of certainty should be regarded with suspicion. But if you have studied history, you realize people never learn the lessons of history, so they will always create and encounter the same problems and make the same mistakes. Human nature has not changed down through the annals of antiquity.
The desire for wealth and power by sociopaths, delusions of grandeur among the rich, tendency of human beings to act in a herd like manner leading to bubbles and busts, and an overall ignorance of the masses, are constants across the millennia. Those at the top of the chain utilize mass media propaganda tools to control the minds of the many, but their hubris eventually leads to their downfall.
“Anyone who studies present and ancient affairs will easily see how in all cities and all peoples there still exist, and have always existed, the same desires and passions. Thus, it is an easy matter for him who carefully examines past events to foresee future events in a republic and to apply the remedies employed by the ancients, or, if old remedies cannot be found, to devise new ones based upon the similarity of the events. But since these matters are neglected or not understood by those who read, or, if understood, remain unknown to those who govern, the result is that the same problems always exist in every era.” – Machiavelli
My apathy in trying to predict when the next financial catastrophe or world war will happen is driven by my belief we are in the midst of a two decade long Fourth Turning period of crisis which began with the financial storms hitting in September 2008. What I’ve come to realize is how slowly Fourth Turnings progress. They proceed at their own pace.
There is an initial death defying event, followed by what appears to be actions taken to alleviate the crisis, lulling the masses into thinking all is well. It’s a false sense of comfort. GDP has grown by a pitiful 30% since 2009, while it grew by 60% from the bottom during the Great Depression. Do you hear highly paid mainstream media shills providing that interesting data point?
The deaths of 65 million people followed the initial lull during the last Fourth Turning. We are currently in another lull (or eye of the hurricane), with an intensification of storms over the horizon. No “solutions” introduced since 2008 have solved anything. They have just exacerbated the debt problems, guarantying the next financial crisis will be devastating and global in nature.
Every Fourth Turning has involved earth shattering levels of violence and war. It is highly doubtful we will avoid a similar or worse fate. Fourth Turnings are resolved in blood, tears, atrocities, courage and the actions of heroes. The narrative of rainbows leading to a pot of gold for the American empire will soon be confronted with lightning bolts of reality.

Just as you can be experiencing a relaxing drive along the Pennsylvania Turnpike in bright sunshine, you can turn on the weather report and find out blizzard warnings have been issued for the road ahead. Many of the drivers are oblivious to the warnings as they never listen to weather reports. Many hear the warnings but ignore them, preferring to live in denial. Others recklessly speed up and try to outrun the storms. Very few heed the warnings and get off the road for the safety of shelter. The weather can change in an instant. Sunshine dissipates rapidly as a winter blizzard engulfs the countryside, paralyzing the economy, overwhelming modern technology, exposing weaknesses, and creating havoc on the roadways as the unprepared pile up in a devastating crash.

“Reflect on what happens when a terrible winter blizzard strikes. You hear the weather warning but probably fail to act on it. The sky darkens. Then the storm hits with full fury, and the air is a howling whiteness. One by one, your links to the machine age break down. Electricity flickers out, cutting off the TV. Batteries fade, cutting off the radio. Phones go dead. Roads become impossible, and cars get stuck. Food supplies dwindle. Day to day vestiges of modern civilization – bank machines, mutual funds, mass retailers, computers, satellites, airplanes, governments – all recede into irrelevance.
Picture yourself and your loved ones in the midst of a howling blizzard that lasts several years. Think about what you would need, who could help you, and why your fate might matter to anybody other than yourself. That is how to plan for a saecular winter. Don’t think you can escape the Fourth Turning. History warns that a Crisis will reshape the basic social and economic environment that you now take for granted.” – Strauss & Howe – The Fourth Turning
This Fourth Turning has over a decade of continuous storms to come. We will not recognize this country when the climax is reached. It could be far worse country or a revitalized nation. The outcome will depend upon the actions we take as individuals and as a country. Cheering for your side in today’s political side shows, meant to distract you from focusing on the true enemies of freedom, is a worthless exercise. Turn off the TV and think for yourself. The generational dynamics and darkening mood will drive the reaction to events as they unfold over the next decade. Batten down the hatches and prepare to navigate through the deadly storms bearing down upon the nation.
https://www.theburningplatform.com/2017/07/16/navigating-through-the-storms/#more-150208
Posted by Crush Limbraw at 10:24 AM