“I never pay for the same real estate twice.”— Patton

Political chaos hit a peak this week with the coordinated banning of Alex Jones from polite social media society and the collapse of the Turkish Lira into the weekend.
How could Alex Jones and Turkey’s currency collapse be related?
They both reveal the desperate need for Globalist control.
Since the election of Donald Trump their fear has been palpable.  The Globalists Jones rants about are real.  Like him or despise him he generates uncomfortable ideas necessary in a free society.
His silencing has been brewing for over a year.  But, silencing him only feeds both his ego and those who follow him.
It validates everything he’s been saying for twenty years, the good and the bad.
Don’t take this the wrong way, I love Alex Jones.
But I don’t weep for Alex Jones.  Because I know he will come away from this stronger than before.
And I’m glad they tried to take his platform away.
And I’m equally glad to see his audience rise exponentially.
Cambridge Analytica, Edward Snowden, Tommy Robinson are not anomalies.  They are the norm.  While many may think Jones is nut-case, they fundamentally believe he has a right to be that guy in a public space.
This was a nuclear bomb of chaos thrown into the digital living rooms of hundreds of millions of people around the world.
They are now awake to the reality these companies are not neutral. That the MAGA crowd isn’t just a bunch of ‘crazy alt-right lunatics.’  Libertarians like myself and Jones have been vindicated.
And it’s good news for every alternative voice in politics.

The stakes just rose exponentially, and it is time for everyone to get serious.
Interest in our work will skyrocket right alongside Alex Jones’.
When you invite the chaos, you reap the whirlwind of the martyrdom.  And any air of moral superiority the elite and their quislings in the media and government once had vanishes like a Tweet in a hurricane.
But what about Turkey?
Same rules, different setting.
Turkey is a mess.  It paid a terrible price for the U.S./Israeli failure to destroy Syria.  Turkey spent billions housing refugees and supporting rebels in pursuit of President Erdogan’s Neo-Ottoman dreams.
Once Erodgan realized he was the scapegoat for that failure he sought a path out.  It landed him on the wrong side of U.S. foreign policy.
Turkey is NATO’s crown jewel.  It is the second largest ground force in NATO.  It controls access to the Black Sea and the Heartland of the world.
And Erdogan wants to join the BRICS.  Buy Iranian Oil, Russian gas, nuclear power and missile defense.  These are no-nos.
This is why the U.S. is pushing Turkey into hyperinflation.
Yes, Erdogan made this attack easy by dissuading the central bank to raise rates but zero-bound interest rates from the Fed and the ECB were not under his control.  And the U.S. won’t stop regardless, not until he capitulates.
Turkey’s $220+ billion pile of worthless corporate debt is the problem.
But, it isn’t just a problem for Erdogan.
When you owe the bank $1000 it’s your problem.
When you owe the bank $220 billion it’s the bank’s problem.
The talk this week about what Turkey must do is fear a collapse of the Lira and Turkey’s debt markets will destroy the banks.
“Turkey must accept an IMF Bailout.”  “Regime change is incipient.”  “Oh, the banks will get their hair mussed but it’s all good.”
The goal is to reverse Erdogan’s push East.  A week after he wants to join the BRICS the Lira enters hyperinflation?
Call me an Alex Jones supporting conspiracy theorist but I call BS.
If Erdogan wanted a deal with Trump he would have dealt months ago.
But, Erdogan is my geopolitical bellwether.  He’s the cockroach who scurries under the shadow of who he thinks is winning.
And to him, that guy is Putin.
So, now the U.S. and Turkey are locked in a battle to the death.  Place your bets on who wins.
Funny, Russia is sitting on a new pile of U.S. dollars, nearly $100 billion, thanks to its total liquidation of its U.S. Treasury reserves.  Do you think Putin’s willing to put that stake on this table? 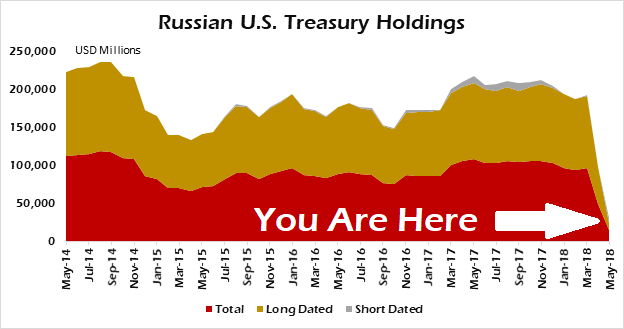 Two can play this game of hybrid war chicken.
Russian Finance Minister Alex Siluanov wants to remove the dollar from all oil sales as it not a reliable currency.  The dollar? Not reliable?  From Russians?  Nonsense!

Anyone doing business in dollars the U.S. doesn’t like can be sanctioned at a moment’s notice thanks to The Magnitsky Act and its sequel from last year, courtesy of John McCain and Bill Browder.
Yes, that Bill Browder.
Erdogan will invite his martyrdom in Turkey as the economy crashes and is parlaying that into support by calling out the U.S. for attacking Turkey unfairly.
It’s a partial lie, but so what?
If Turkey’s new friends aid her, swapping out the worst Turkish debt for rubles and/or yuan, the pain for Turks will be great, as it was for Russians in 2015, but the other side of that is independence.
I always bet on the cockroach.
The same way Alex Jones will thrive in this new environment.
This won’t stop with either men.  Iran, Russia, Turkey, Alex Jones, Sargon of Akkad for pity’s sake… who’s next?
I’m thinking Pakistan thanks to new Prime Minister Imran Khan.
Reprinted with permission from Gold Goats ‘n Guns.
The Best of Thomas Luongo
Publisher of the Gold Goats n Guns. Ruminations on Geopolitics, Markets and Goats.
Copyright © 2018 Thomas Luongo
https://www.lewrockwell.com/2018/08/thomas-luongo/inviting-chaos-and-creating-martyrs-alex-jones-and-erdogan/