Lira Collapse To Jump the Mediterranean - By Thomas Luongo

The Turkish Lira crisis is fundamentally different than the Russian Ruble crisis of 2014/15.  This one has contagion risk.
Back then no one was worried about the fall of the ruble having spillover effect.  If Sberbank failed, it wouldn’t jump to Europe.  Then again, there was little worry about that since the Russians had more than enough in reserves to cover the debts.
With Turkey, however, there is a real worry about this jumping into Europe. From Zerohedge:

Friday’s fall came after the Financial Times reported that supervisors at the European Central Bank are concerned about exposure of some of Europe’s biggest lenders to Turkey, including chiefly BBVA, UniCredit and BNP Paribas. The FT reported that along with the currency’s decline, the ECB’s Single Supervisory Mechanism has begun to look more closely at European lenders’ links with Turkey. The moves also came after the US showed no signs of lifting crippling sanctions despite the visit of a Turkish delegation to the US capital.
According to the FT, the ECB is concerned about the risk that Turkish borrowers might not be hedged against the lira’s weakness and begin to default on foreign currency loans, which make up about 40% of the Turkish banking sector’s assets.
And while it does not yet view the situation as critical, it sees Spain’s BBVA, Italy’s UniCredit and France’s BNP Paribas, which all have significant operations in Turkey, as particularly exposed, according to two people familiar with the matter.

Note the banks here.  Italian zombie-bank UniCredit.  Spain’s BBVa and France’s major zombie-bank BNP Paribas.   You can almost smell the desperation in the Financial Times’ reporting on this.
Everyone thought Turkey would not take their feud with the U.S. this far, that U.S. hybrid war belligerence would win the day before the point of contagion.
But, that’s the problem with most market analysts, they analyze things in terms of the best trade of the moment, not the best trade for the next fifty years.

They only analyze in terms of what they would do to protect their trade, not what a country would do to protect its future.
Turkey needs to become independent of the U.S. and the depredations of dollar diplomacy.  Erdogan will use this extreme weakness in the lira and the bond markets to separate those companies loyal to Turkey and those loyal to the U.S.
And the former will be bailed out and the latter left to twist in the wind, blowing back their bankruptcies on the European and U.S. banks that are exposed to them.
The first rule of writing is that conflict reveals character, it doesn’t create it.
Remember, debt is a two-way street.  When the debts are small they are your problem.  When they are large, however, they are the bank’s problem.
$222 billion in U.S. dollar-denominated Turkish corporate debt is the definition of the bank’s problem. So, while the U.S. barks and Trump splutters about ‘winning’ and all the rest, Erdogan remembers that these are the same people who tried to depose him in 2015 and failed.
And Vladimir Putin and Iran were the ones who saved his hide and his government.
Euro-ther Choice is Default
Also note that this was brewing all week as the Euro pushed down towards support at $1.155 and then through it yesterday afternoon.  Now, we are going to get a weekly close well below that level. 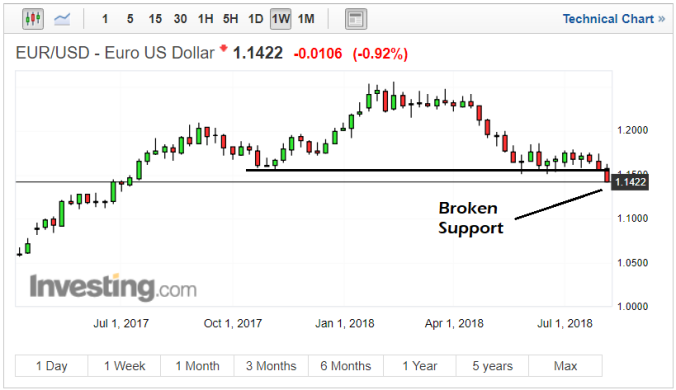 Important Technical Breakdown of the Euro
This started with President Trump doubling the tariffs on Turkey as President Erdogan continues to defy him over the return of Pastor Brunson, who has got to be a CIA asset or something.  There’s no reason why we’re willing to go to these lengths to alienate and outright destroy the economy of a NATO partner unless there was something bigger at play.
I’ve spoken at length over the past few months about how this situation (check out the articles here) and fully believe that Erdogan and Turkey knew this was coming and are prepared for it.
Because, this morning the talk about this collapse is not about the effects on the Turkish economy or Turks themselves, but rather how it affects the bottom lines of the broader markets… you know, those who have the most to lose here.
Turkish Judo?
So, at any point Turkey could have knuckled under.  It could have negotiated with Trump to avoid this.  But, given that they refused to it tells me a number of things:
These are the things we know.  We also know that China is Turkey’s biggest trading partner and will keep Turkey liquid through dollar-lira-yuan swaps.
Now that we have that out of the way it is really that hard to believe that Turkey didn’t invite this attack by the U.S.?
The proof of this is Erdogan’s refusal to accede to capital controls.  He’s letting the capital flight happen.  He wants the pain to be felt by everyone.  And once it’s over, Turkey can rebuild its currency, since it has huge gold and foreign currency reserves and low sovereign debt-to-GDP.
In other words, Erdogan is forcing a shock de-dollarization of the Turkish economy.  So, by the way, is Iran.
As I said before, crisis reveals character. And Erdogan can now figure out the character of those doing business in his country; where their loyalties lie.  And knowing that there was significant contagion risk, isn’t it reasonable to think that Erdogan, Putin and Xi see this as an opportunity to hit the U.S. and Europe as hard as they are getting hit?
Russian Roulette
At the beginning I said this situation didn’t mirror the Russian crisis of 2014/15.  That wasn’t completely true.  From the contagion risk perspective no, from every other perspective yes.
Putin used the crisis to reel in the Bank of Russia and purge it of IMF-style thinking of responding to currency crisis.  He forced central bank President Elvira Nabullina to bailout certain firms, swapping their dollar-debt for ruble debt, while letting other wither.
He destroyed the legitimacy of advisors like Alexander Kudrin and much of the ‘Atlanticist Fifth Column’ that dominated the financial sector and began the process of truly de-dollarizing the Russian economy.
And because of this set Russia on a path of financial and foreign policy independence that cannot be challenged by the U.S. in any material way.  Sure, sanctions will hurt a little here or there, but there are work-arounds.   People are smarter than governments, and capital flows to where it is treated best.
Sanctions have limits.  Invariably, they never work.  Putin’s approval rating soared post-ruble crisis.  He had to endure a major coup attempt from within the Kremlin in March of 2015, likely from the same fifth-column oligarchs whose oxen he’d been goring for years.
He survived and it’s now history.
Erdogan has survived to this point with more power and popularity than he’s ever had.  Expect the same outcome, but this time it’ll cost the U.S. NATO and the EU possibly its currency.

Posted by Crush Limbraw at 7:59 AM