Always Covid & Never Christmas: Breaking the Spell That Holds us in its Grip - by Rob Slane 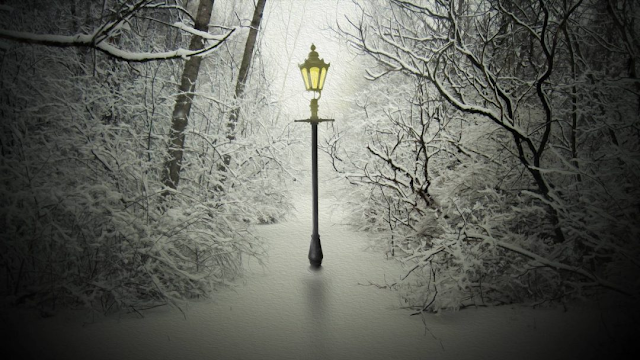 “Boris Johnson? Who is he?” asked Lucy.

“Why, it is he that has got all Covidia under his thumb,” said Mr Tumnus. “It’s he that makes it always Covid. Always Covid and never Christmas; think of that!”
– The Lion, the Witch and the Wardrobe, CS Lewis (with a few changes)

Were he around today, I have no doubt that C.S. Lewis, one of the 20thCentury’s greatest intellects, would be utterly scathing of what the British Government has done to this country over the past 7 months, given that it has been the very epitome of the scientific and technocratic oligarchy he warned us about decades ago. And so I feel somewhat at liberty to take his comment about the White Witch turning Narnia into perpetual winter without joy and without Christmas, and apply it to our own situation in the land of Covidia (which is where you now live) – a place of perpetual fear and misery, where ordinary life is impossible, and where any hints of joy breaking out must be nipped in the bud before they are allowed to grow to challenge the new winter  normal that is settling fast around us.

The words may even turn out to be literally true. In Scotland, they are already talking about what they call a digital Christmas, whatever absurdity that is, whilst in England a psychological game of Good Cop/Bad Cop is going on, with Comrade de Pfeffel Johnson apparently desperately hoping that we’ll all have a normal Christmas, but with members of the ironically named SAGE committee saying this is wishful thinking. Who will win out? Of course the Bad Cops will win out, but no doubt carefully managed and cleverly messaged to present it as a kind of victory for Good Cop, whereby he wangles some concessions for us, such as a relaxation of the Rule of 6 to the Rule of 6+1 for a day, so that Great Aunt Maud doesn’t have to spend the day alone, and with Rishi Sunak perhaps pledging some more of his magic beans to fund subsidised turkeys. Come to think of it, cut-price turkeys would be a fairly apt metaphor for those in charge of this debacle. But lest they try to befuddle us with silly details over the next few weeks, hold this thought front and centre: The idea that anyone should need permission from the likes of de Pfeffel Johnson and his crew to be able to celebrate with their family and relations the coming of the King of Kings into the world is beyond parody.

Lewis’s point, like so much of what he wrote, was really rather profound. His original words — “Always winter and never Christmas” — were his way of showing how tyrants operate. They desire two things:

Firstly, they need to create perpetual oppression, a “new normal” which is depressing, ongoing, and which pulls everyone down into the resigned acceptance that there’s nothing they can do about it.

Secondly, they need to eradicate all attempts at celebration in the midst of the drudgery, because celebration reminds people of what life could be like and indeed what life should be like if it were not for the tyrants, and so is in danger of breaking the spell.

In the case of Narnia, that perpetual thing that dragged everyone down was winter. Ordinarily, winter is wonderful, but constant winter for 100 years without hope of thaw is oppressive and enough to destroy the morale of the population who gradually come to accept their conditions as normal. And just in case they should attempt to restore morale in the midst of the drudgery, reminding themselves what real life looks like, feels like, tastes like, why it must be stamped out. This indeed happens when the White Witch comes upon “a merry party” of animals sitting down to “a lovely smelling feast” with “decorations of holly,” “the smell of plum pudding,” and “raised glasses”. Joy cannot be allowed to imperil the misery, and so the scene ends with her turning them into stone.

In Covidia, the perpetual thing that drags everyone down is the constant, unrelenting fear, dished out via “hard-hitting emotional messaging,” using cherry-picked and out of context statistics, in order to back up the absurdly superstitious notion that we can control viruses by hiding from them. Like the White Witch, any semblance of normality and real life breaking through must be crushed, as this is the greatest threat to the perpetual fear and, if allowed to go unchecked, may start to convince people that we really don’t need to live like slaves and that life can operate perfectly normally if we allow it. The imposition of absurdly high fines for non-compliance, which could ruin a person, are the Covidian equivalent of the Narnian turning into stone.

One of the saddest things about all this, is how the unlawful decrees (and yes they have no proper basis in law) are greeted by those in charge of enforcing them with what seems to be a kind of relish. Policing Christmas meals might not seem like the sort of thing you pay your taxes for, or the sort of thing that threatens your life or livelihood, yet the West Midlands Police and Crime Commissioner, David Jamieson, whose force has historically not been very quick to break up grooming gangs, said this about breaking up Christmas celebrations:

“If we think there’s large groups of people gathering where they shouldn’t be, then police will have to intervene. If, again, there’s flagrant breaking of the rules, then the police would have to enforce.”

Of course, he could have said something along the following lines:

“West Midlands officers are paid to protect law-abiding citizens from criminals and criminal activity. If the Government thinks we’re going to pour our resources into policing Christmas gatherings, they’ve got another think coming.”

But of course that would take common sense, courage, and a backbone, all of which seem to have deserted a good number of our authorities many years ago. What he went on to say must make it to the shortlist for the 2020 Ironic Statement of the Year Award:

“We’re sitting on a time bomb here. We’re getting very near the stage where you could see a considerable explosion of frustration and energy. Things are very on the edge in a lot of communities and it wouldn’t take very much to spark off unrest, riots, damage.”

Well yes, but might policing people’s Christmas gatherings be one of those things that contributes to the tipping over the edge? Worth considering, David.

It is plainly obvious that the people in charge of the Covid debacle have no intention of relinquishing their grip, or of allowing us to return to proper life, or of allowing us to take proportionate decisions for ourselves again. It is equally obvious that they are ably abetted by hordes of willing lower level bureaucrats who seem to have finally found their calling in life — hassling law-abiding citizens who are doing perfectly normal things. They are attempting to police almost every aspect of our lives, and the tragic thing is that we have largely allowed them to do it without so much as a peep. These joyless, soulless, technocrats intend to keep Britain under their thumb, making it always Covid and never Christmas.

In the long run, they need to know that it shall not always be so. That same King of Kings whose annual incarnation celebrations they wish to wreck and whose world they wish to control, did not come to earth 2,000 years ago to have his eternal plan wrecked by the likes of them. He is very patient, but when he decides enough is enough, that will be that (see Psalm 2), and these wannabe authoritarians will find themselves in the same despot’s dustbin of history as their predecessors.

In the meantime, what can we do as these tragic technocrats keep us in their icy, pseudo-scientific grip? Maybe not much, yet there is one small thing that we can all do, which if it catches on may have a chance of breaking the spell that has us in its grip. As Lewis teaches us, the one thing tyrants fear is masses of people suddenly defying them by refusing to act according to their joyless, soulless technocracy. And so that is just what we should do. As much as is possible, defy them by thinking normally, speaking normally, and living normally. Don’t let their absurd measures dictate to you how you should think and act. Rather, let your life be like that merry party, with its lovely smelling feast, its decorations of holly, its plum pudding, and its raised glasses. And go all out on that this Christmas.

Make this your new three-phrase slogan to replace the banal phrases with which this Government has effectively hypnotised millions of people into giving up their lives and placing us in a superstitious Doom-Loop: