Vox Popoli: The importance of intelligence 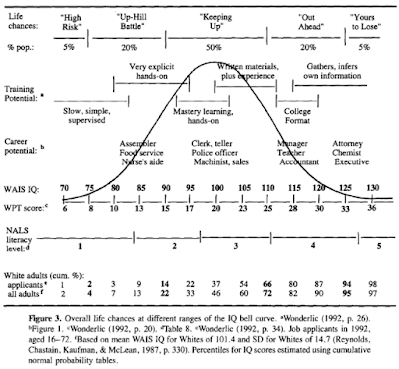 Differences in intelligence matter. For members of the cognitive elite to maintain otherwise is like the rich arguing that money does not matter. Differences in g affect the lives of individuals and families. They help shape the social order and limit our ability to reshape it (Gottfredson, 1985, 1986b; Gottfredson & Sharf, 1988).

Much social policy has long been based on the false presumption that there exist no stubborn or consequential differences in mental capability. Worse than merely fruitless, such policy has produced one predictable failure and side effect after another, breeding widespread cynicism and recrimination. Educators routinely overpromise and schools, accordingly, consistently disappoint. Welfare reformers do not take seriously the possibility that today’s labor market cannot or will not utilize all low-IQ individuals, no matter how motivated they may be. Civil rights advocates resolutely ignore the possibility that a distressingly high proportion of poor Black youth may be more disadvantaged today by low IQ than by racial discrimination, and thus that they will realize few if any benefits (unlike their more able brethren) from ever-more aggressive affirmative action. Virtually everyone is capable of living productive, fulfilling lives in which they contribute to the general welfare of their communities. However, protecting and enhancing that potential requires us to appreciate its greater vulnerability to disruption among lower IQ individuals.

From a study entitled "Why g Matters: The Complexity of Everyday Life" by Linda Gottfredson. There are essentially three factors that determine what a society will be like. The first is average IQ. The second is the level of trust. And the third is religion.

Note that two of those factors are genetic and heritable.

Posted by Crush Limbraw at 2:33 PM