Of Two Minds - Everything is Staged

You know how realtors stage a house to increase its marketability: first, they remove all evidence that people actually live there. (Of course a vacant house is ideal for staging because there's none of the messy real-life stuff to deal with.)

All the clutter of everyday life must be moved elsewhere so the house can look like a bloodless furniture showroom. In other words, fake.

Then various tricks /cues are employed to activate the sense of "home": induce the "smell of fresh bread" in the kitchen, adorn rooms with vases of fresh flowers, and have a few fake "family" photos set on bookshelves.

We all understand homes for sale are staged for marketing, as are showrooms and any other space devoted to selling. The raison d'etre of the space is to close the sale, so exacting care is given to every signal, cue and nuance.

(It doesn't always work as intended. Apple Stores make me want to run screaming from the sci-fi white prison workshop to blessed freedom.)

The problem is everything in America is now staged with an eye on selling you something. Maybe it's just selling your attention to an advertiser or data-mining outfit. Maybe it's selling an ersatz slogan like "we're all in this together" to placate the herd being led to slaughter.

Maybe it's phony membership in a movement that masks the few taking advantage of the many with a bogus ideological rallying cry. Maybe it's a so-called "panel of experts" offering up soothing assurances that this highly addictive opioid is incredibly profitable-- oops, did I say that? I meant "safe." It's incredibly safe.

And so on. Since everything is staged, nothing is remotely credible. The 70-year old performer's deep-red hair (with a small splash of gray to make the charade "believable"): fake.

The Stepford automatons lining the stage? Replicas of a carefully coiffed "reality."

"Democracy": --nothing but an elaborate simulacrum of a real-world republic.

"Fake" is now itself fake as the meta-marketers seek to undermine the concept of fake to sell the idea that what we recognize as fake is actually real: we're told that it's the real thing that's been hidden from view that's fake. The photo on the shelf of the fake family is real, we're told; what's fake is the actual real photo of the messy real-world family who actually lives here.

Given that everything is staged, trust has been completely destroyed. To trust anything being presented as a means to an end--i.e. a con, a scam, a sales pitch, a fake scent of fresh bread, etc.--is to be a chump.

The legitimacy of everything that's being staged has been irrevocably lost. Nobody tells the plain truth any more because telling the truth is straying off-message. Staying on-message is the Prime Directive in America. Stray from the message and the truth might leak out, and then we're all doomed because we can't close the sale.

There's no escape from this dependency on staging and staying on-message. The only hope of a return to the real world is the collapse of the entire fake, staged status quo, the collapse of every institution, every media outlet, every social-media platform, every single manifestation of marketing, cons, scams, pitches, gamed statistics, and all the frantic assurances that fake is real and real is fake because your belief in the fraud is the key to closing the sale.

All the staging is a means to an end, and everyone in America is nothing more than a means to an end: close the sale so the few can continue exploiting the many. If you can't stay on-message, you're gone--no wealth or security for you, bucko.

Staging is no substitute for reality. The frauds, cons and scams are failing to keep the simulacrum world glued together because no matter how expert the marketing and how great the desire to close the sale so the few can continue exploiting the many, reality intrudes right when the deal's about to close and the whole absurd contraption collapses in a heap. 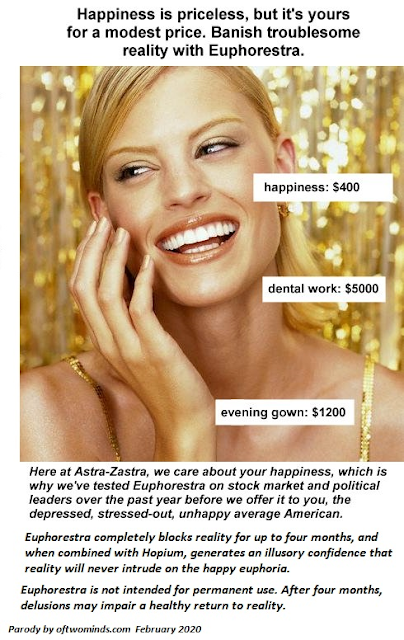 My new book is available! A Hacker's Teleology: Sharing the Wealth of Our Shrinking Planet 20% and 15% discounts (Kindle $7, print $17)

The Story Behind the Book and the Introduction.