Buckle Up! The May CPI Was No Transitory Blip By David Stockman

The Fed’s destructive money-pumping has many victims, but chief among these is the Wall Street financial narrative itself.

It emits not a whiff about the patent absurdity of the Fed’s monthly purchase of $120 billion of treasury and GSE debt under current circumstances; and treats with complete respect and seriousness the juvenile word game known as “thinking about thinking about tapering” by which the clowns in the Eccles Building fearfully attempt to placate the liquidity-intoxicated speculators on Wall Street.

So it’s not surprising that today’s 5.0% CPI reading was made inoperative within minutes after the BLS release by a chorus of financial pundits gumming about “base effects” and ridiculing outliers like soaring used car prices (up 29.7% YoY), which, of course, Bloomberg reporters never see the inside of anyway.

Then again, that’s why we look at the two-year stacked CAGRs, which smooth the ups and downs of the worst lockdown months last spring; and also why we use the 16% trimmed mean CPI, which eliminates the highest 8% and lowest 8% of items in the overall CPI each month (both sets of deleted outliers are different each month).

In the present instance, therefore, off-setting the used car prices in the highest 8% of items during May is the -5.0% YoY drop in health insurance costs (if you believe that BLS whopper) and the -5.3% drop in sporting event prices, which, of course, have been largely zero since last April.

In any event, the 16% trimmed mean CPI for May was up by 4.7% annualized versus the April number and was higher by 2.62% on YoY basis.

Still, the more salient point is that on a two-year stacked basis the plain old CPI – used car prices and all – leaves not a scintilla of doubt: Consumer inflation is accelerating and rapidly.........................

...............In sum, the chart below captures the one-time history of the Fed’s phony “lowflation” narrative – an aberrant condition that is now fading fast.

Sooner or latter they will run out of excuses and back inflation reports to average down. And that, in turn, means tapering of the Fed’s great bond-buying fraud – the lynch pin of the greatest bond and stock bubble in recorded history.

Do we think that will trigger the greatest financial asset value collapse in modern times? 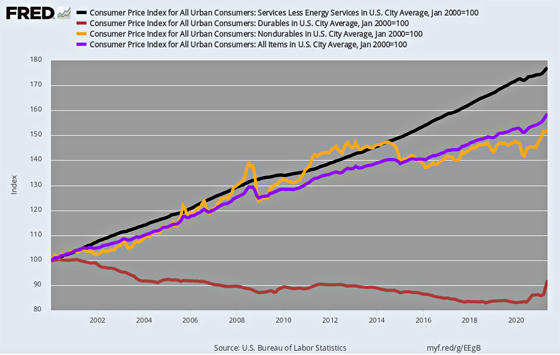 The Best of David Stockman

Former Congressman David A. Stockman was Reagan's OMB director, which he wrote about in his best-selling book, The Triumph of Politics. His latest books are The Great Deformation: The Corruption of Capitalism in America and Peak Trump: The Undrainable Swamp And The Fantasy Of MAGA. He's the editor and publisher of the new David Stockman's Contra Corner. He was an original partner in the Blackstone Group, and reads LRC the first thing every morning.