US Ruling Class to Peasants: No Babies For You! By Ben Bartee

The bottom of the baby-making barrel has fallen out  as the US reproduction rate plummets:

“The numbers are part of a decadeslong trend toward fewer and fewer babies being born each year — which means we’re getting further away from the possibility of having enough children to replace ourselves.”

Why is this occurring? The reasons are multivariate, the weapons deployed numerous – not least of which being toxic chemical additives in food, water, and consumer products that have sterilizing effects:

“While much of the decrease in fertility worldwide is by choice, an increasing number of couples, especially in industrialized countries, are finding conception more difficult and damaged babies more common. The research is quite clear that metals and chemicals in air, water, food, and health-and-beauty aids are damaging fertility in many ways. These toxicants are causing men to experience relentlessly decreasing sperm count and function while women are suffering progressively worse anovulation, impaired implantation, and loss of fetal viability.”

There’s an answer to everything. In this case: depopulation – for the Earth, for women. Fewer children (for you, not for them) is a good thing, a trendy thing, a feminist thing, an environmentalist thing.

At a 2010 Ted Talk, Gates appeared to suggest using vaccines as a means to get human population growth down to zero in the service of, theoretically, reducing carbon emissions:

“Now, we put out a lot of carbon dioxide every year — over 26 billion tons… And somehow, we have to make changes that will bring that down to zero… This equation has four factors, a little bit of multiplication.

So you’ve got a thing on the left, CO2, that you want to get to zero, and that’s going to be based on the number of people, the services each person is using on average, the energy, on average, for each service, and the CO2 being put out per unit of energy. So let’s look at each one of these, and see how we can get this down to zero. Probably, one of these numbers is going to have to get pretty near to zero.

[cuts to a frame of people, audience laughs uproariously]

The world today has 6.8 billion people. That’s headed up to about nine billion. Now, if we do a really great job on new vaccines, health care, reproductive health services, we could lower that by, perhaps, 10 or 15 percent. But there, we see an increase of about 1.3.”

But Bill, dear self-anointed Public Health Commissar, investor in Moderna’s mRNA gene therapy technology passed off as COVID “vaccines,” why on Earth (and how) would vaccines against viral pathogens lower the birth rate?

Via Dr. Robert Malone, the inventor of the mRNA and DNA vaccine core platform technology:

“The spike protein also has reproductive toxicity, and Pfizer’s biodistribution data show it accumulates in women’s ovaries. Data suggests the miscarriage rate among women who get the COVID ‘vaccine’ within the first 20 weeks of pregnancy is 82%.”

Get it, peasant? Get your shot and render your ovaries barren to reduce CO2 emissions – for the Earth.

*Incidentally, hundred-billionaires like Bill Gates who preach about CO2 emissions also happen to own and routinely use CO2-spewing private jets for their personal travel.

Aside from chemical warfare waged by the corporate state on the civilian population, there is another major cultural factor to explain the decline in birth rates: neoliberal corporate-state propaganda.

Notice that Huffpo, nor CNN, nor Vanity Fair, nor any propaganda organ of the corporate state ever writes articles glamorizing the family. Indeed, quite the opposite:

An Open Letter to My Friends Who Don’t Have Kids:

“We have a real friendship. But right now, we’re interested in different things. While you talk, I’m watching the clock because my baby needs to eat in 12 minutes. I don’t realize that you spent 30 minutes waiting on me to get here because the baby had a blowout on the way. As your hands move with your story, I’m wishing I had worn a different color shirt that wouldn’t show the baby spit-up. I don’t notice your fabulous choice of color on your new manicure (as I tooootally would have before). As you talk about things at work, I’m distracted by doubts about whether Ferbering was the right move. But I don’t see the doubt on your face about whether your contract will be renewed.

Shame on me. You deserve better. And I haven’t been there.

We had kids. And became self-focused.” 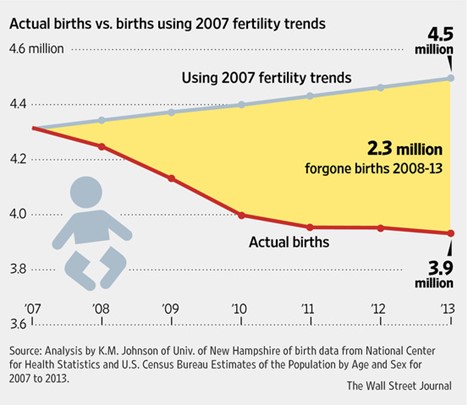 Motherhood – the primary, godlike, immaculate biological function of the female sex necessary for the furtherance of the human species – is, at this point, an act of rebellion, a sort of Holy War waged against the anti-human forces of the blooming technocracy.

Ben Bartee is a Ukraine-based American journalist with opposable thumbs. Contact him via his blog, Armageddon Prose. Support his independent True North journalism via Patreon or PayPal.