It appears I'm far from the only one who has been expecting the neo-liberal world order to collapse for a long time:

In 1972, a team at Massachusetts Institute of Technology predicted that humanity's pursuit of economic growth without regard for environmental and society costs would lead to society collapsing by the mid 21st century – a new study finds this may become a reality.

Gaya Herrington, Sustainability and Dynamic System Analysis Lead at KPMG, undertook the task of proving or disproving MIT's claims and used a world simulation model that analyzed how our world has progressed from 1972.

Herrington looked at 10 key variables, such as population, industrial output and persistent pollution, and determined our business-as-usual mentality will spark a decline of economic growth within the next decade.

However, the data revealed an even bleaker future – our world could experience a total societal collapse by 2040.

A total societal collapse would mean an abrupt decline in quality of life, food production, industrial output and ultimately the human population.

The primary factor these scarcity projectionists have failed to take into account is the rapidly declining quality of the human population. While technology has repeatedly rendered pessimistic projections incorrect, the declining average IQ and performance capabilities of the Western nations combined with the relative expanse of the low-performance populations vs the high-performance populations has now reached the point that one can't count on many more technology rabbits being pulled out of hats.

I still see no reason to modify my prediction that the USA will break apart in the 2033 timeframe; certainly that could provide the impetus for the subsequent collapse of the neo-liberal world order. 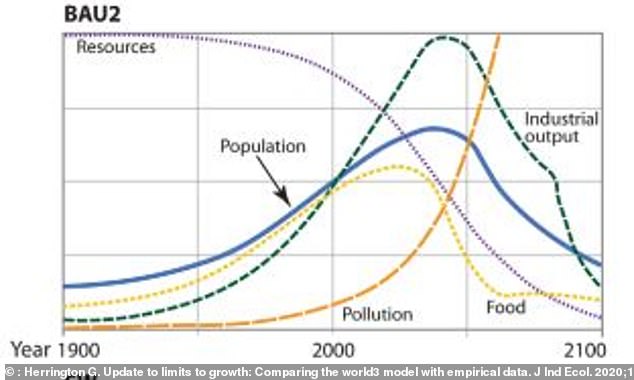