The ancient Egyptians created a sophisticated economic system thousands of years ago. Although they may seem far removed from modern life, their inventions in the monetary realm provided the basis for many economic practices still in use today. If you think your taxes are bad, take a look at what your obligations would have been in the past!
The economy was well-developed and supported by special bureaucracy in the kingdom of the pharaohs. The legal system was headed by the pharaoh and supported by compliant nobles and officials. The ruler created every law. Some of the ancient Egyptian innovations changed the economic world forever. Although the economy wasn’t as complicated then as it is now, there are many practices that continue to be relevant/used in today’s world.

Most of ancient Egypt’s income was based on agriculture, but trade also had an important role in the budget. Egypt had a unique place on the map of the ancient world. The Nile River allowed them to trade goods all over the country via ships. Moreover, since the ancient Egyptians often had enough food to feed their people, they also sold many goods abroad.

Map showing the Nile river. (CC BY 3.0)
Since at least the reign of the 3rd Dynasty, mining expeditions were sent to places like Sinai to excavate goods such as alabaster, quartzite, and copper. Egypt had trade contacts with their near neighbors, but growing evidence also suggests that they may have traveled as far as northern Europe. Although it is likely that didn't take place very often, it is certainly possible they made trade connections to those distances. Middle Kingdom artwork showing Hyskos traders bringing trade goods and tribute to the ancient Egyptians. (learnlearn.net)
The Egyptian colony stationed in southern Canaan was also a very important element in the Egyptian trade route. The pottery produced there was popular in the Mediterranean area. Egyptians exported papyrus, linen, grain, gold, glass, and stone artwork. However, trade was an expensive practice, especially when they imported items like beloved lapis lazuli stones for the pharaohs from the area of modern Afghanistan and olive oil from Greece and Crete.

The ancient Egyptians didn't use paper money or coins right away. However, their payment system was well thought out. The labor market was based on hiring people and paying them with food, oil, drinks and other goods. For trade, they preferred to just exchange items. They also paid each other with animals, like sheep. 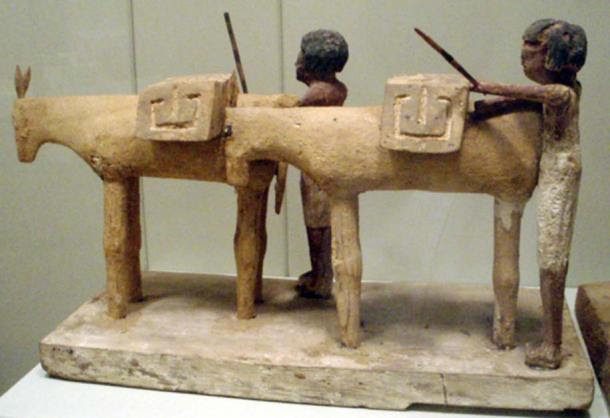 Ancient Egyptian tomb figurines depicting workers loading up a couple of donkeys with supplies. Early Middle Kingdom, circa 2000 BC. (Keith Schengili-Roberts/CC BY SA 3.0)
With time, they started to use pieces of gold as money. This is a huge difference between Egypt and Mesopotamia - where the alternative to paper money was silver rings. In Egypt, silver was probably even more expensive than gold. Evidence supporting this idea comes from a New Kingdom Period wall painting depicting a man weighing big gold rings which was discovered in Thebes.
Researchers have discovered that all metal pieces, including gold and silver, were carried in jars or sacks in ancient Egypt. To make trade between Palestine, Egypt, and Mesopotamia easier they created a system that could have been based on the traditional Egyptian measurement known as deben (equal to three ounces). To give you an idea of how this worked, it was possible to buy a sack of wheat for one deben and the cost of a cow was about fifty debens. 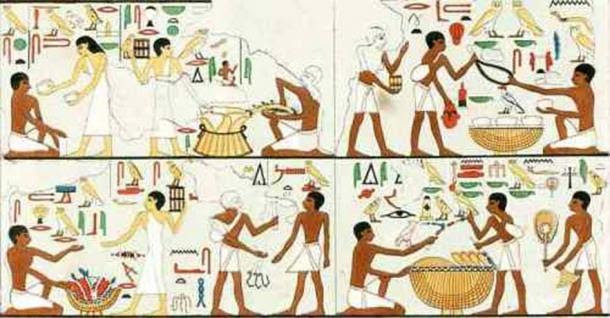 Old Kingdom market scene: Two of the customers are seen carrying little boxes on their shoulders, suspected to have contained pieces of metal used as payment. (Public Domain)

There are many resources describing taxes in ancient Egypt. Most of them come from tomb reliefs – showing just how important this aspect was to society.  It is unknown how the rulers of the First Dynasty came to understand that taxes would increase their budget, but a nationwide system of taxation already existed in their times. Some of the earliest recordings of taxation come from the reign of the legendary pharaoh Narmer. 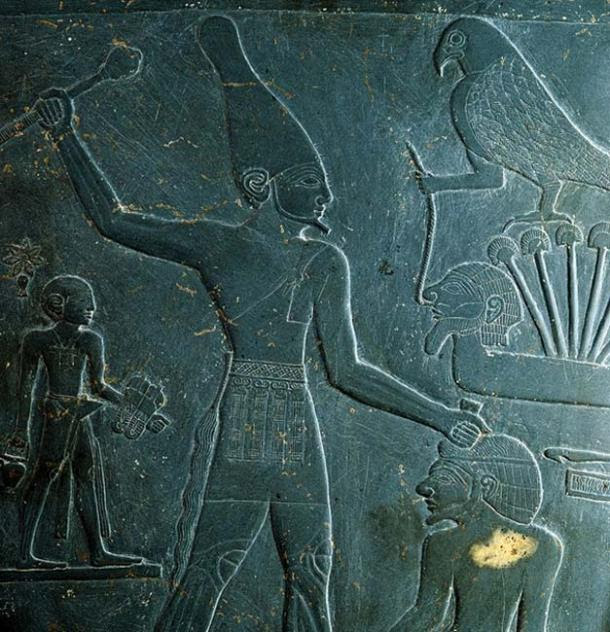 Close-up view of Narmer on the Narmer Palette. (Public Domain)
Taxes were usually high in ancient Egypt, and the system wasn't good for anyone except those in the court. The position of tax collector was one of the most dangerous and brutal jobs. Tax collectors cruelly punished people who didn't pay their taxes. If the debt was very high, the tax collector could even torture a poor peasant to death. Thus, tax collectors were hated by the rest of society, many of them lived in isolation, and they spent their lives working for the king while fearing for their lives.

Egyptian peasants seized for non-payment of taxes. (Public Domain)
Taxes were linked to many aspects of life. They ranged from what is considered basic and typical today, to the most ridiculous areas - like taxes for burial ceremonies. Burial taxes were some of the most controversial (like in other cultures), but nobody could avoid paying them. According to Brian Muhs:

''In the Ptolemaic Period, temples continued to administer and control access to cemeteries in the deserts. Burial plots had to be purchased from temples, and a money tax had to be paid on the burial of the dead in these cemeteries. The burial tax or tax of the overseer of the necropolis is attested from numerous Demotic receipts on ostraca from Thebes. It was collected at a rate of half silver kite or one drachma per burial from Year 2 of Alexander IV (315 BC) until the beginning of the reign of Ptolemy IV (222 BC), however, the rate was raised to half silver kite and one obol or seven obols per burial.''


An Ancient Egyptian Understanding of Wealth

When the treasury of the pharaoh was filled with gold, precious stones, and other luxurious items, the ruler was wealthy. For normal people, when their houses contained some capital and some barrels, they were wealthy. Although modern people are still amazed with the beauty of the monuments created in the pharaohs’ orders; it is worthwhile to consider that what funded those structures was the poverty of the individuals who physically built them. 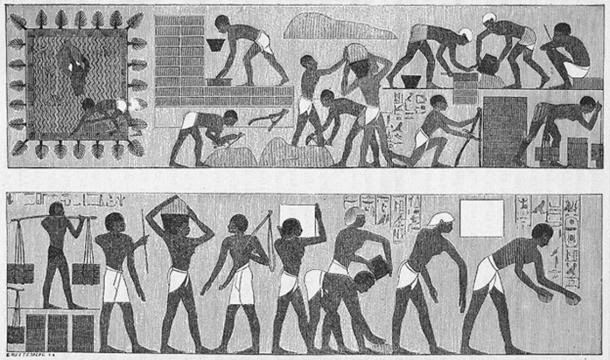 Posted by Crush Limbraw at 7:44 PM