Votes in Hillary-heavy Detroit may have been counted up to 6 times
This is some next-level poetic justice: A Michigan recount backed by Jill Stein and the Democrats, and intended to delegitimize Trump’s astonishing victory on November 8, has actually exposed widespread fraud in precincts which voted heavily for Clinton.
Hillary even sucks at cheating. Via the Detroit News:


Michigan’s largest county voted overwhelmingly for Democratic candidate Hillary Clinton, but officials couldn’t reconcile vote totals for 610 of 1,680 precincts during a countywide canvass of vote results late last month.
Most of those are in heavily Democratic Detroit, where the number of ballots in precinct poll books did not match those of voting machine printout reports in 59 percent of precincts, 392 of 662.

According to state law, precincts whose poll books don’t match with ballots can’t be recounted. If that happens, original election results stand.
“It’s not good,” conceded Daniel Baxter, elections director for the city of Detroit. 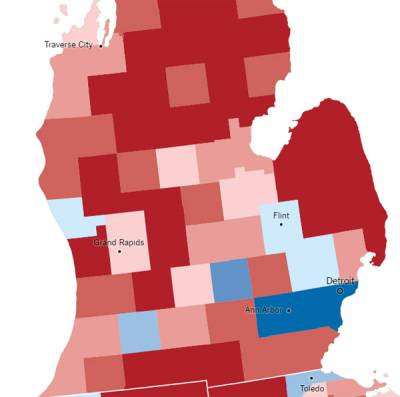 Here’s the best part: Officials blame the scanners used to tally votes for the huge discrepancies. Hard to believe:


Once they started the Michigan recount in earnest, and knowing he would be exposed, the Detroit City Clerk Daniel Baxter all of a sudden started claiming that the optical scanners which read the paper ballots did not work the day of the election. Baxter blamed the discrepancies on decade-old voting machines. That is his cover story. Nothing like this was mentioned until he realized their voting fraud scheme would be detected.

Baxter’s claim is that, when trying to push the ballots through the readers, the ballots would be stuck and they’d have to push them through again thus ‘ACCIDENTALLY’ resulting in a double count. He says the poll workers sometimes ‘FORGET’ to adjust the machine count and instead let the ballot count twice.

Sounds reasonable.
It gets worse, though. Vigilant citizens who observed the recount said that there were numerous signs of vote tampering in Hillary-heavy precincts.
Ken Crider, a 2014 Republican candidate for District 19 of the Michigan House of Representatives, said he watched the recount effort in Cobo Hall in Detroit with his wife, Penny. In a Facebook post-Tuesday, he claimed to have witnessed some serious ballot discrepancies. Crider wrote:


MUST READ! Penny Crider and I just got back from helping watch the recount at Cobo Hall in Detroit. On Nov. 8th (Election Day) the election officials at 8:00 p.m. shut down the polls. They then reconciled the differences from the machine count and the voter count on the computer. At this point, a Metal tag/seal with a serial number is put on the box and the box was taken away.


Penny’s precinct, Detroit Precinct #152 had an unbroken seal and everything looked proper. The tag on the box said 306 and the book said 306 and the ticket said 306, so there should be 306 paper ballots on the box, right. Well when they pulled out the ballots the stack seemed short and when they finished separating the two page ballot to count the Presidential page only guess how many ballots were in the box? 304 no, 299 nope, 200 nada, how about 100 wrong again. There were only exactly 50 paper ballots in a locked sealed box that again was supposed to have 306. HMMMM.


Oh I forgot to add, since there was a discrepancy in the two numbers, the original count stands.
One more thing my precinct (sorry I forgot the number), had 525 votes on the book, tag and ticket and we counted 525 ballots the election official was praising the Lord “Hallelujah we have a countable precinct” Jill Stein had three (3) votes.

In other words: In Democratic Detroit, each vote was counted 6 times!
Just imagine the landslide popular vote victory Trump would have enjoyed if the Democrats played fair on Election Day.
https://www.lewrockwell.com/2016/12/no_author/hillarys-electoral-fraud/