"Free Trade Has Destroyed American Manufacturing." - This criticism of free trade is wrong.

(I agree with Gary North - as far as it goes - but what is the connection to American employment? Think!
As time progresses, there is no avoiding the increasing efficiency/productivity per employee - but who is employed? Yes - immigrants - at lower wages. If immigration was severely reduced, American employment would increase - and at higher wages. Natural supply and demand! - CL)

To understand why it is wrong, first consider this chart of the per capita output of American manufacturing. It is not a chart that most Americans have ever seen. Economist Mark Perry has provided it. 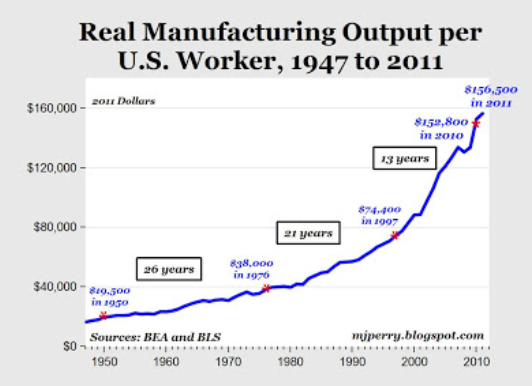 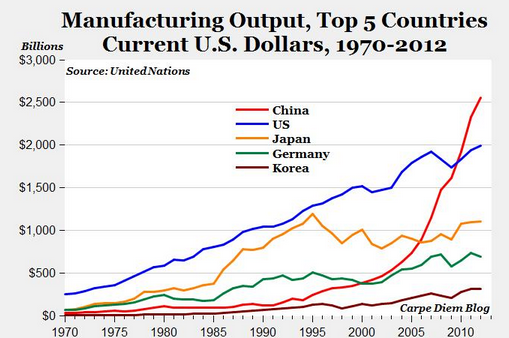 American manufacturing is a remarkable success. Yet it flourishes within a low-tariff/sales tax framework. It gets more efficient. Firms hire fewer workers to maintain their productivity. That is what efficiency is all about: a reduction in the the price of inputs for any level of output.
Nevertheless, there are never-ending demands from protectionists, who want the federal government to impose sales taxes on imported goods. These demands go back to 17th-century mercantilism. They believe that higher taxes promote economic prosperity. Politically conservative protectionists know that their call for higher taxes will be resisted by other political conservatives, so they do not call these sales taxes "sales taxes". They call them tariffs. By concealing the economic growth-reducing nature of these sales taxes behind a politically and traditionally acceptable word, they gain support from conservatives who have never studied free market economics, beginning with their complete ignorance about Adam Smith's anti-mercantilist book,Wealth of Nations (1776).
Here is what protectionists focus on: only about 10% of the American economy is based on manufacturing.
To understand the importance -- meaning unimportance -- of this statistic, look at this chart. It is posted here. 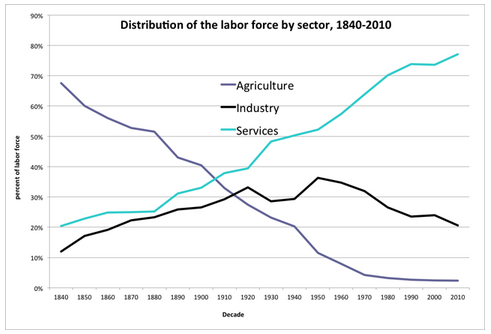 The chart overestimates employment in manufacturing. The actual figure is closer to 8% than 20%. The combined percentage of manufacturing, construction, and mining is about 12.6%, according to the Bureau of Labor Statistics. This is expected to fall to 12% in 2022.
What is significant about this chart is this: the service sector has been larger than the manufacturing sector ever since 1840. What we see today is nothing new.
The biggest decline has been in agricultural employment. It has almost disappeared. But we do not worry about this, do we? The "heart of America" was agriculture in 1840: almost 70%. Now it is at 2%. Nobody cares. Output is high. Our farms export grains. The huge increase in productivity has displaced workers, beginning with the reaper in the 1840's. This is a good thing. It has happened all over Western civilization and Japan. It is now happening in China and India. This is a mark of increased wealth. Fewer workers are required to feed us city slickers.
What about the value of output? Services make us richer. Compare today with 1948. 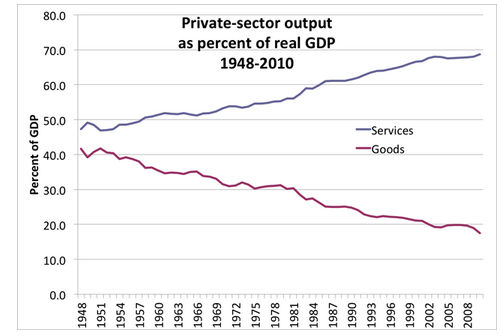 Is America richer today than in 1948? In every sector, it is. In anything digital/electronic, our wealth is incomparably greater. I could barely function today if information costs were as high as they were in 1970, let alone 1948. I would have to live close to a major research library.
Think of your life. To what extent do you derive your lifestyle from manufactured products? Not much. Estimate this in terms of hours spent per day. Your tools are mostly digital. You car, your home, and your appliances are your most obvious manufactured products. How often do you buy a replacement appliance? Once a decade? Are they cheap in terms of your income? Far cheaper than would have been true in 1948.
In those areas of life that are low value -- manufactured goods -- Americans have become increasingly dependent on imported goods. This is not true in high-value areas of life: services.
If the regulatory system had been less onerous, would 30% of our wealth be derived from manufacturing? No. There would be some marginal increase. But if we also reduced regulation on services, the percentage of services in our lives would grow. Net, there would not be much change in the distribution.
Manufacturing is going the way of agriculture. But we are not getting poorer. This has been true since at least 1840.
Free trade in manufactured goods is of marginal overall importance. Free trade in digital services will increase. The government cannot easily tax this kind of international trade. There are no tariffs and quotas on information. But protectionists never mention this aspect of free trade. They are focused on physical production, which is of declining value in our lives. They seek to protect manufacturing jobs -- jobs that would steadily disappear if tariffs were at 100%.
The decline in American manufacturing is not the result of free trade. It is the result of our increasing wealth. We buy services and digits, not space-occupying stuff.
We can be confident in this scenario: (1) manufacturing will continue to decline in importance as a share in the United States economy; (2) robots will replace a larger percentage of manufacturing jobs than service jobs; (3) per capita wealth will increase, as it has since at least 1840.
If the federal government raises tariffs and quotas -- highly unlikely -- this will lead to a displacement of American-made robots by foreign-made robots. It will have no significant impact on the number of workers in manufacturing. The main question is where the robots will be located: on-shore or off-shore. Protectionists make their case in terms of American manufacturing jobs. These jobs will continue to disappear under free trade or protectionism.
http://www.garynorth.com/public/14455.cfm

Posted by Crush Limbraw at 3:31 PM