A History of Cronyism in America - By David Gordon

Patrick Newman dedicates Cronyism to Murray Rothbard, and it is a fitting choice, as this outstanding book continues and extends Rothbard’s brilliant interpretation of American history. Newman is eminently qualified to do so, having edited both the fifth volume of Rothbard’s Conceived in Liberty and his The Progressive Era.

Like Rothbard also, he tells us exactly the principles he uses in setting forward his account of events. One of these is that “history is a clash between the forces of liberty, or those in favor of individual-decision-making and the market allocating resources, and the proponents of power, the factions that support coercion and government organization of production” (p. 14). This view leads him to the book’s main subject, the “history of cronyism: when the government passes policies to benefit special-interest politicians, bureaucrats, businesses, and other groups at the expense of the general public” (p. 13). 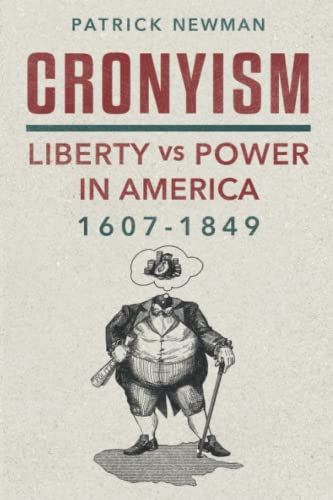 Newman’s second thesis is that “those who control the government’s power are corrupted over time … I define corruption as the willingness of government officials to push for interventions that benefit themselves and other favored interests … Lord Acton’s famous quote can be modified accordingly; ’Power tends to incentivize cronyism and absolute power incentivizes cronyism absolutely’” (p. 14). This tendency makes libertarian reform difficult, though not impossible: to dislodge an interventionist state, the reformers must take power, but doing so tempts them to cronyism.

I wonder whether Newman has put too much pressure on his second thesis. Lord Acton said that power tends to corrupt, and Newman retains this phrasing in his modification of Acton’s dictum, but throughout the book, he takes it to be inevitable that power does lead to cronyism. Need this be so? But whether power must lead to cronyism, it often did, and this Newman abundantly shows. In what follows, I’ll mention only a few of the many topics the author discusses.

In his account of the Constitutional Convention, Newman stresses the malign influence of the Revolutionary financier Robert Morris, who hoped that he could gain financially from a powerful central government: “The Federalist-dominated Constitutional Convention quickly scrapped the Articles and devised an entirely new government. Unsurprisingly, Robert Morris’ ambit—Gouverneur Morris, Wilson, and Madison—played the largest role … Robert Morris also sat on the sidelines because he knew his extensive involvement would generate too much controversy. Overall, the convention’s Constitution laid the foundations for a corrupt American Empire” (pp. 59–60).

Many opponents of today’s powerful state look back with longing to a strict construction of the Constitution, but Newman is not among them. He thinks that the Anti-Federalists were correct in warning against constitutional tyranny. The “strict construction” of John Taylor of Caroline and others, though admirable in its aims, was wrong. Many readers will be inclined to object, but here Newman faithfully follows Rothbard. It might be useful for readers to compare Newman’s interpretation with the very different analysis of Kevin Gutzman’s The Politically Incorrect Guide to the Constitution. (See my review of it here.)

As will already be evident, Newman is no admirer of the Founding Fathers. Madison was an extreme centralizer, though he fell short of the monarchical Hamilton, and his half-hearted conversion to states’ rights in the Virginia Resolutions reflected no real change of mind. His scruples about the constitutionality of a national bank were genuine but soon overcome, and with his bellicose policies leading to the War of 1812, he abandoned any semblance of constitutional principle. “After the war, the New National Republicans—the direct descendants of the moderate Republicans—continued to enact Federalist policies: another central bank, peacetime protective tariffs, and plans for a federal transportation network. Madison came full circle: he began his career laying the groundwork for a Federalist government and ended it by adding the finishing touches” (p. 181).

Newman’s opinion of Jefferson is higher, but he too was corrupted by power. When he drafted the Declaration of Independence, “Jefferson also started to envision an American Empire different from the reactionaries’ dream. The theoretician did not want an Empire of Power; he desired an Empire of Liberty composed of independent yeomen who would homestead the frontier. He did not care if a loose confederation of states or multiple confederations controlled the continent”(p. 38).

The temptation vastly to expand American territory through the Louisiana Purchase proved too much for Jefferson’s libertarian principles. “Jefferson and his Republicans interpreted the Constitution in the way the federalists actually promised, requiring its powers to be confined to those explicitly enumerated, expandable only with amendments. So, according to the Republicans, the Louisiana Purchase should have been unconstitutional. But it was a lot of land…. The consequences of the Louisiana Purchase were seismic, bursting the Empire of Liberty at the seams”(pp. 156, 159). During the war of 1812, Jefferson said, “’The acquisition of Canada … will give us experience for the attack of Halifax the next, and the final expulsion of England from the American continent.’ The Empire of Liberty was now an Empire of Power” (p. 188).

In part owing to the influence of the film Amistad, John Quincy Adams is often these days held up as a virtuous crusader against slavery, but he does not escape Newman’s severe scrutiny. “The central blame for their [the imperialists’] global empire, from acquiring Florida to the Monroe Doctrine and then the Panama Congress, can be laid at the doorstep of John Quincy Adams” (p. 243). Before his loss to Andrew Jackson in 1828, Adams was quite willing to compromise with proslavery interests.

Some opponents of centralized government look to John C. Calhoun for inspiration, but Newman dissents. He too was a time server. “In the late 1820s, at the risk of losing his home state to Radicals … , Vice President John Calhoun secretly drafted the Exposition and Protest. In essence, this influential pamphlet articulated Calhoun’s doctrine of nullification … the Exposition was far less radical than Jefferson’s Kentucky Resolutions…. First, Calhoun previously supported big government and never sincerely adhered to strict constructionism. Second, Calhoun grounded the Exposition in The Federalist Papers … Calhoun’s nullification is closer to the Federalist opportunism of the Jeffersonian era than Antifederalist ideology.” For a different view of the matter, much more favorable to Calhoun and to Jefferson as well, see Marco Bassani’s Chaining Down Leviathan and my review of it here.)

I have been able to touch on only a few of topics in this erudite book, which is filled with items of interest; and I shall mention just one more of these. Often people think of Friedrich List only as a German economist whose protectionist doctrines were widely influential in Europe. But in fact he spent a good deal of his life in the United States, and Newman points out that he played an active role in the pro-high tariff Harrisburg [Pennsylvania] Convention, held in 1827: “Notably, the arch–American system economist Friedrich List hoped the convention would ‘lay the axe to the root of the tree, by declaring the system of Adam Smith and Co. to be erroneous’” (p. 227).

In his devotion to liberty and his immense scholarly industry and knowledge, Newman brings Murray Rothbard to mind, and I am sure that Rothbard would have admired Cronyism and found in its author a worthy successor.

Note: The views expressed on Mises.org are not necessarily those of the Mises Institute.

The Best of David Gordon

David Gordon is Senior Fellow at the Mises Institute and Distinguished Columnist at LewRockwell.com. He is also author of Resurrecting Marx and An Introduction to Economic Reasoning and editor of numerous books including Strictly Confidential: The Private Volker Fund Memos of Murray N. Rothbard. Send him mail.

Posted by Crush Limbraw at 8:31 AM