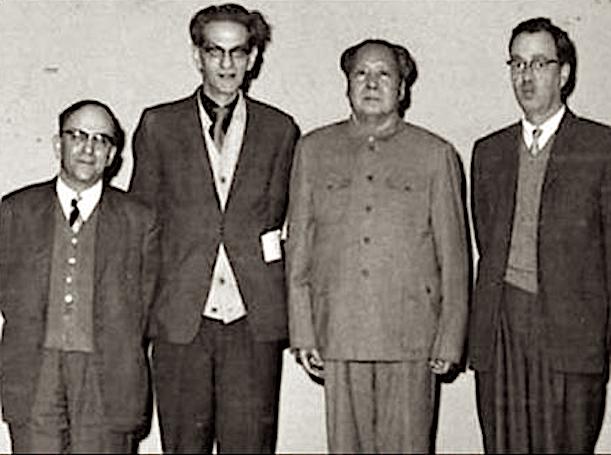 In a previous article, we showed how the excesses and decadence of the Jewish-dominated Weimar Republic ensured the rise of National Socialism in Germany — but far less known is that Jews brought that same spirit of degeneracy and revolution to the virtually lawless Shanghai of the 1930s, which would ultimately lead to China falling into the hands of the Jewish-backed communists led by Mao Zedong.

The Times Of Israel review of Taras Grescoe’s 2016 book Shanghai Grand inadvertently shows the connections between Weimar and Shanghai — and the one thing they had in common — revolutionary Jews:

Sitting in his daily perch in a café on Montreal’s east side, writer Taras Grescoe is a world away — both in place and time — from the focus of his new non-fiction book. In “Shanghai Grand,” he recreates the long-vanished glamor and opium-fed decadence of the Chinese metropolis in the 1930s. It was a time when it was known as the “wicked old Paris of the East,” and, as he discovered in the course of research, it was also a doomed world in which Jews had a starring role…

…The treaty port of Shanghai in the 1930s was a special moment in history that Grescoe evokes deftly in the book through a novel-like narrative. He presents a compelling portrait of the city, especially its foreign-controlled International Settlement and French Concession in which people from 14 mostly Western countries enjoyed extraterritorial rights, free of Chinese law.

At the time, pre-revolutionary Shanghai had an exotic, seductive allure as one of the most cosmopolitan places in the world. It was famous for its extravagance — sometimes glitzy, sometimes sordid. Its rich cultural mix, lucrative business opportunities and hedonistic nightlife attracted a constant flow of adventurers, shape-shifters and bon vivants from Europe and North America who often crossed paths in the city’s hotel lobbies, exclusive clubs and dockside dives.

“Shanghai was a place to which the ambitious, the wily and the desperate could escape to discard old identities and recreate their lives from scratch,” Grescoe writes early in the book. The city also attracted high profile visitors, such as Hollywood stars Charlie Chaplin, Paulette Goddard and Douglas Fairbanks and writers Noel Coward, W.H. Auden, Christopher Isherwood, and George Bernard Shaw.

By then, Shanghai’s Jewish community, which dated back to the mid-19th century, had a significant presence. “In the 1930s, the city had the largest Jewish population in the Far East,” says Grescoe, 49. “The treaty port of Shanghai was founded in 1842 by the English, French, and Americans, after the First Opium War. Later, the first entrepreneurs to really understand the potential of the city’s strategic location and access to a large population were Sephardic Jews from the Middle East.” Among those were the Sassoons, Hardoons, Ezras and Kadoories, who thrived in the opium, cotton, and eventually, the real estate business. Then, after the Soviet Revolution in 1917, Russian Jews came.

During the three years following Hitler’s Kristallnacht pogrom in 1938 when the world closed its doors to Jews fleeing the Nazis, Shanghai became “the port of last resort” for 20,000 Jewish refugees escaping Europe.

The book abounds with intrigue, drama and colorful characters. Events unfold against growing turmoil and squalor among the local Chinese as war and revolution loom large, inevitably piercing the bubble in which the expatriates live. As Japan invades and occupies Shanghai, both Chinese communist revolutionary leader Mao Zedong and his nationalist rival Chiang Kai-shek fight for power, with the former prevailing with the creation of the People’s Republic of China in 1949.

At the heart of “Shanghai Grand” is an unusual three-sided love story between British real estate mogul Sir Victor Sassoon, swashbuckling American writer Emily (Mickey) Hahn and Chinese poet Zau Sinmay. When Grescoe set out to write the book, he had little idea Jews would figure so prominently in its pages, including two of its three main protagonists. “I knew from the start that two main characters in the story were Jewish,” says Grescoe, referring to Hahn and Sassoon. “I was surprised, however, at just how many of the subordinate figures — outlandish adventurers, idealistic dreamers, selfless heroes and yes, a fair share of scoundrels — turned out to be Jewish.”

A rough count of people in the book of Jewish ancestry turns up no less than 30, spanning a wide range of ages, professions, personality types, political leanings, religious observance and geographical origins. Had it not been for reasons of space, Grescoe could have easily added several more Jews.

In addition to Hahn and Sassoon, who dominate the book, other Jewish larger-than-life figures appear on the page, all of whom Grescoe clearly relishes introducing to the reader — and to those he meets even today. “I wonder if some Jewish readers have a conflicted attitude toward individuals like Morris ‘Two-Gun’ Cohen and Trebitsch Lincoln,” says Grescoe. “Cohen was a real tough who spoke with a bastard Cockney-Canadian accent and became a general in the Chinese Nationalist army. As for Lincoln, he was a rabbi’s son from a small town near Budapest who had an astonishing career as an international triple agent.”

Even some of the non-Jewish characters cited in the book have a Jewish connection, such as Ladislav Hudec, the architect of several landmark buildings in Shanghai. As Hungary’s Honorary Consul in Shanghai during World War II, he helped Jewish refugees from Europe by issuing them passports to travel safely to Canada and the United States…

…While researching the book, Grescoe learned China had a small Jewish community as far back as the 10th century AD but Jews were unknown to most Chinese. As a result, anti-Semitism was a foreign concept. He also discovered that after the Japanese occupiers established a Jewish ghetto in Shanghai in 1943 under pressure from their Nazi allies, the Jews and local Chinese had decent relations. “For the common Chinese in Shanghai, especially those in Hongkou, the site of the ghetto, the Jews were just neighbors, and they tended to get along,” says Grescoe. “The overall impression you get is of people thrown together in poverty but willing to laugh together, work alongside one another, and help one another…”

…Grescoe, who is not Jewish, was born in Toronto and grew up in Calgary and Vancouver. He moved to Montreal in 1996 after also living in Paris. “Shanghai Grand” is his sixth non-fiction book and the first to have such pronounced Jewish content.

“Characters like Mickey Hahn and [novelist] Vicki Baum made me reflect on the interesting status of Jews in the Diaspora,” says Grescoe. “As outsiders from gentile culture, they were put in a position to be observers and chroniclers. They could function in the dominant culture, and often thrive, but they remained distinct. Their marginalization, even if it was subtle, gave them a fresh outlook.”

“The majority of the writers who have influenced me have been Jewish, and outsiders in their own communities,” says Grescoe. “Franz Kafka in Prague. Marcel Proust in Paris. Giorgio Bassani in Ferrara and Rome, author of the brilliant Garden of the Finzi-Continis. Grace Paley in New York, Saul Bellow in Chicago, the list is never-ending.”

It would hardly be an understand to suggest — as the Jews do themselves — that the 20th Century was the Jewish Century — when Jews crawled out of the shadows of the ghettos and shtetls to rise to unrivaled power worldwide.

The Zeitgeist is decidedly Jewish — and success for the “gentile” depends on how completely they embrace the Jewish Zeitgeist and become Judaized in the same way that people became Hellenized 2,000 years ago.

A goyische writer like Grescoe — whose major influences were Jewish — is the norm these days for the rare non-Jewish writer who manages to eek out a living in the Jewish-dominated publishing industry — he will be trusted enough to put a positive spin on the Jewish dominance of a subject — while knowing enough to ignore the dark underbelly.

It was this so-called “third wave” of Jewish immigration into Shanghai that brought in the Ashkenazi-Communist revolutionaries from Europe which would culminate in the death of at least 40 million Chinese as part of their “Great Leap Forward” into this poisonous death cult where the Jewish Utopia is always Just One More Execution Away™.

This review of Grescoe’s book merely alludes to this “third wave” of Russian Jews who flooded into Shanghai during WWII but fails to mention that many of them were communists, such as Mikhail Borodin who helped Sun Yat Sen lay the groundwork for the communist takeover — including the essential formation of the Canton Central Bank in China.

Russian Jew Grigori Voltinsky, who was the architect of the Chinese Communist Party, began his revolutionary work as a writer/editor for the Shanghai Chronicle newspaper — an occupational strategy which revolutionary Jews still employ as they dominate the media in virtually every western nation today to orchestrate a worldwide bolshevik revolution under the guise of “globalism.”

Another essential figure in the Jewish-Communist takeover of China was British-born Jew Solomon Adler — a prominent member of FDRs coterie of Jewish-Soviet agents and spies — the notorious “Silvermaster Group” — most notably Harry Dexter White (née Weit)– with whom Adler conspired — along with Rothschild IMF agent V. Frank Coe — to deliberately withhold a gold loan to Chiang Kai-Shek’s nationalists so as to de-stablize the currency — which resulted in Weimar-style hyper-inflation and social unrest essential to the eventual communist takeover.

Prior to the 20th century, the Jews had already established a power base in China — notably Hong Kong and Shanghai — during the Sassoon-Rothschild-financed Opium Wars which resulted in China becoming a de facto colony of the Jewish bankers, using the British as frontmen — and fall guys — who would atone for their “sin” of oppressing, exploiting, and colonizing “people of color” by allowing them to immigrate into England — and the West in general — as “reparation” for these past wrongs of the Jews.

Of course, international Jewry has never abandoned this tried and true modus operandi — wildly successful in Weimar and Shanghai — as they continue to subvert and destroy the West with degeneracy and hyper-inflation while the world’s wealth and resources are further consolidated into the hands of a rapacious Jewish elite — using China as their economic hitman.

The new “Killing Fields” of the 21st century will take place in lands formerly known as Christendom — and be brought about by lethal injection via “vaccines” that just so happen to have been produced by Jewish “scientists” — Revolution By Injection™.