The Madness of Cooling A Cooling Planet By Dr. Mark Sircus

We are into our third spring month, and it is still snowing in the northern hemisphere, yet the madmen ruling the planet will not let the media inform the people that the climate experts were wrong about man-made global warming. Earth is facing a deep freeze, and solar scientists are warning us that this cooling, which has accelerated dramatically this year, will continue for several decades.

We will only care about climate change when we start to go hungry because of the cold weather. The endless winter is again shortening the growing season. The extension of winter this late into the spring will drive already soaring food prices into the stratosphere. It is May 10, and it is still snowing, and another vast cold front moves as far south as Florida.

The trillions spent on the pandemic could have all gone into vertical farming and other technologies to mitigate crop losses, thus saving millions of more lives in the hungry future that is coming our way. The common sense that the longer you ignore a problem, the more it will grow applies to a cooling planet and the damage it will do to our food supply.

Though there are many madmen in the world, there is only one mad enough to cool a cooling planet. Bill Gates is probably the most dangerous man on Earth, and there seems to be little anyone can do about it. He is a target that no one can hit, but Tucker Carlson certainly took a shot at him and what he wants to do to the Earth. I think Tucker is right. Gates has a God complex worse than any Guru that has walked the planet. What Tucker does not say that his plan to cool the Earth is a global suicidal project because the Earth is already cooling on its own.

In a TED talk, Gates comes right out with a formula that is best resolved if there are no people, no one using carbon, no one with a carbon footprint. In reality, Bill Gates lost his marbles over CO2, making it into an evil gas when it is one of the essential life-giving gases on the planet.

Our life and health depend on high enough levels of CO2 in the blood and tissues. Carbon dioxide is a nutrient and a product of respiration and energy production in the cells, and its lack or deficiency is a starting point for disturbances in the body. Plants certainly love CO2. CO2 deficiencies equate with bicarbonate deficiencies, which relate to acid, low cell voltage, and low oxygen conditions. 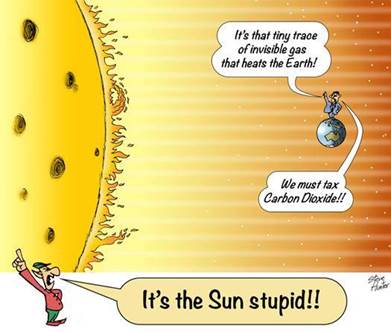 World temperatures have generally been declining for about ten years while CO2 is rising rapidly,” writes famous weatherman Piers Corbyn, an astrophysicist.

“Carbon dioxide does not drive climate,” says Piers flatly. “The idea CO2 controls climate, and that man’s CO2 particularly controls climate, is delusional nonsense. There is no evidence for this in real data. Temperature changes in the oceans, in the long run, drive carbon dioxide levels, so they tend to move together.”

German Study Shows Added CO2 Has Led To14% More Vegetation Over Past 100 Years!

Gates, in his almighty vision, plans to dim the sun. If Bill Gates got his way in terms of climate, the only people left alive would be living in self-supporting underground shelters. Perhaps on or near the Equator, people would still survive above ground, but no one knows how profound the devastation would be if they blocked the sunlight on a cooling planet. Netflix even has a series called Tomorrows Express about a vast train of Earth survivors that goes round and round the globe. Everyone else is dead from the cold.

Micheal Shellenberger, the author of Apocalypse Never, the guest on the Tucker Carlson show above, says that Gates is well-intentioned. I earnestly beg to differ with him.

I do not know why Gates thinks we need to spend billions on cooling the atmosphere when we have plenty of volcanos doing that for us. Just look at the satellite images of the ash plume from St. Vincent as it spreads over the Atlantic and reaches Africa.

The sunsets in a sky dusted with ash over Màrdalsjškull, 20 km east from Iceland’s Eyjafjoell volcano, on May 5, 2010

The U.N. says the world is ‘on the verge of the abyss’ that if we do not do something, we are finished and will fry in the frying pan. I think it is interesting that this late in the climate game that they would risk their long-term reputation on such a gigantic lie.

Bill Gates Does No Know When To Shut Up

RT News reported that social media users are recoiling at Bill Gates’ call for a global disease alert system, questioning why a tech billionaire with no medical expertise or elected office is plotting what they fear could become a platform for tyranny.

The Microsoft co-founder, who ranks as the world’s third-richest person, took to Twitter to make his pitch for a new system that he said would help prevent future pandemics. This would include “mega testing diagnostic platforms” that could test 20 percent of the population every week, Gates said in a video promoting his plans. He added that future treatments, such as monoclonal antibodies, and vaccines would be developed far faster in response to future disease outbreaks.

Nick Hudson, the co-founder of PANDA (Pandemics – Data and Analytics), comes to the devastating conclusion that every single element of the Covid narrative has been false. “The narrative says that there’s a deadly virus spreading across the planet, that nobody’s immune to it, and there’s no cure. Even asymptomatic people can spread it and are major drivers of the epidemic of disease. And unless we lock down and wear our masks, until vaccines arrive and everybody gets vaccinated, we’re all going to die.  And anybody who challenges this narrative is a lunatic, a menace, a danger to society, hence the suppression.”

Along with Dr. Fauci, Bill Gates is at the head of the mainstream narrative, and both he and his now ex-wife are all for censorship. His money gets him everything, even the right to put down the leading lights in infectious diseases and epidemiology, Nobel Laureates. But his money does not make him right.

Margaret Thatcher expressed the fatal flaw of consensus thinking beautifully: She wrote, “Consensus seems to be the process of abandoning all beliefs, principles, values, and policies in search of something in which no one believes, but to which no one objects.”

The Truth Machine, a book co-written by Michael Casey, a senior advisor at MIT Media Lab’s Digital Currency Initiative, and Paul Vigna, a reporter at the Wall Street Journal, makes it clear that the basis of all civilizational activity, whether it be economic or social, is trust. Bill Gates deserves absolutely none of our trust. Neither does the press or the vast majority of our politicians.

If one is interested in some climate science, watch this interesting video.

Reprinted with permission from Dr.Sircus.com.

The Best of Dr. Mark Sircus

Dr. Mark Sircus, Ac., OMD, DM (P) (acupuncturist, doctor of oriental and pastoral medicine) is a prolific writer and author of some astounding medical and health-related books. Dr. Sircus’s methods are based on medical science and long years of clinical experience, not only his own but experiences of doctors from around the world who have been practicing brilliant medicine.

Posted by Crush Limbraw at 9:24 AM