Update (Friday 0711ET): Organizers of the "Freedom Convoy" have "received confirmation that GoFundMe has released our first batch of funds" following reports Thursday, the crowdfunding platform blocked access to the money.

The internet was in an uproar yesterday when GoFundMe blocked access to the funds that would help support the convoy of at least 50,000 truckers headed to Ottawa, Canada's capital, on Saturday. The donations are expected to be dished out to truckers who participated in the rally, paying for their fuel, food, and hotel. GoFundMe wanted more clarification from the group on how the money would be spent. 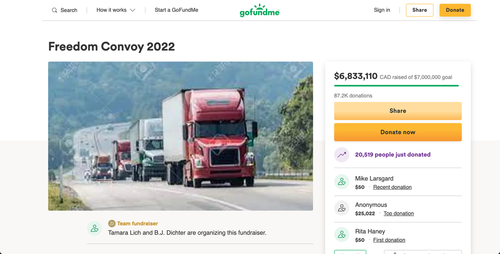 A major revolt is underway in Canada as the government and corporate media downplay the movement that continues to gain steam. Truckers are up in arms about vaccine mandates that began on Jan. 15 and required unvaccinated truckers crossing back into Canada to be tested and quarantined for a week. The US enacted a similar policy on Jan. 22. These two mandates immediately took 20% of the 160,000 cross-border American and Canadian truckers off the road due to noncompliance in both countries.

On Thursday, the movement caught the eye of the richest man in the world, Elon Musk, who tweeted that he supports the truckers to his 71.8 million followers.

Here's the full update from one of the organizers of the Freedom Rally, who said the first batch of the more than 6.8 million CAD had been released.

We have some great news to share with all of you! We have received confirmation that GoFundMe has released our first batch of funds and is initiating our first transfer. We can't thank you enough for your patience.

Sadly, the legacy media felt it was necessary to publish news articles implying that GoFundMe had frozen our funds for a variety of outrageous reasons. In reality, the temporary hold was due to international banking regulations which dictate many of GoFundMe policies. It is common practice with GoFundMe to conduct this kind of due diligence to ensure the funds are legitimate.

For our case, because of the overwhelming donations we have received, and we are currently the 8th fastest growing campaign in their history, the constant attempts by activists to flag our campaign as illegitimate exacerbated the already tedious process. The team at GoFundMe have been amazing to work with and we are very appreciative of their support.

The release of this first batch of funds will allow us to start processing registration forms and remittances to drivers who need our support. Initially, there will be a bottle neck because of the large number of requests we need to process, and because of payment processing times. Please bare with us as we are working as fast as we can to get this done.

As a reminder, these funds will first assist drivers of all Semi-trucks and direct support vehicles such as pilot trucks and/or mechanic trucks in the convoys to Ottawa. Registrations must have been received and signed off by the Road Captains. These forms must also be completed exactly as per the instructions on the registration form, otherwise they will not be processed. Please note that all submissions are not guaranteed, as this is dependant on how many registrations are received and how much is donated through the GoFundMe campaign.

We have an amazing team behind the scenes comprised of lawyers, accountants, and bookkeepers working hard to ensure people will be compensated. As a reminder, this will take a bit of time, and we ask for your patience while the team reviews and validates the overwhelming number of submissions by participants.

Again, thank you to everyone for their kindness, patience, and support while we get this sorted. Each and every one of you is playing a part in unifying Canadians across the country and showing the world that there is not just hope for Canada, but for the entire world.

... and who knows, the truckers might be able to bring Ottawa to a standstill beginning on Saturday. Meanwhile, President Justin Trudeau is in isolation after a possible COVID exposure.

Update (1900ET): In a significant turn of events, that we are sure will be pilloried by Trudeau as being some mix of racist, misogynist, dangerous, or 'damaging democracy', Elon Musk - having earlier tweeted his support of the Canadian truckers protesting vaccine mandates...

...just turned up the social media amplifier to '11', telling his 71.1 million Twitter followers that: "If you scare people enough, they will demand removal of freedom. This is the path to tyranny," and added that the way to fight back is to "vote them out." 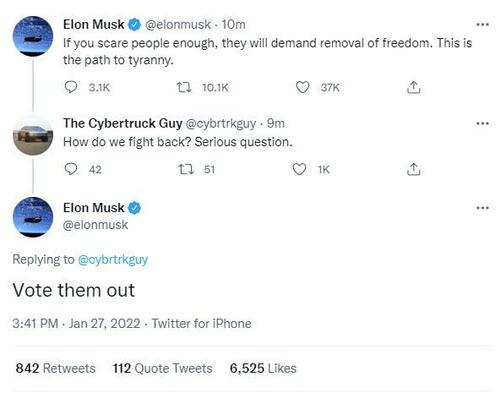 A massive convoy of Canadian truckers is nearing the capital of Ottawa to protest the cross-border COVID-19 vaccine mandates severely affecting the trucking industry.

Top government officials, big technology companies, and mainstream media are downplaying the protest, dubbed the "Freedom Convoy" that began in Vancouver on Sunday and is expected to reach Ottawa, Canada's capital, on Saturday. 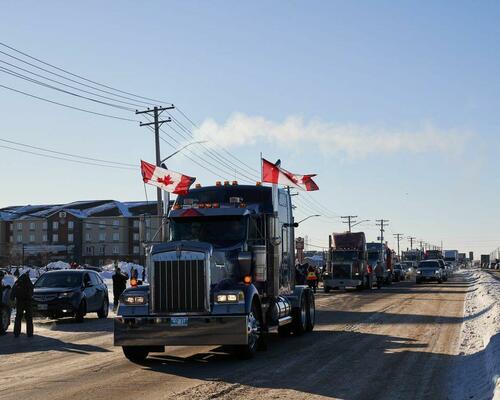 "The small fringe minority of people who are on their way to Ottawa are holding unacceptable views that they're expressing, do not represent the views of Canadians who have been there for each other who know that following the science and stepping up to protect each other is the best way to continue to ensure our freedoms, rights, and values as a country," Trudeau told reporters Wednesday.

The president has called anyone unvaccinated racist and misogynistic extremists.

Meanwhile, big tech companies are taking aim at the movement to limit their mobility ahead of reaching Ottawa.

GoFundMe froze an account linked to the group that organized the protest. The GoFundMe page raised CAD 6 million as of Thursday morning from 76,000 people. "We are asking for donations to help with the costs of fuel first, and hopefully food and lodgings to help ease the pressures of this arduous task," the GoFundMe page says.

But GoFundMe spokeswoman Rachel Hollis sparked significant backlash after the tech company froze distributions of the fund after requesting organizers to show documentation "about how funds will be properly distributed."

It makes sense why Trudeau, big tech, and corporate media are downplaying and limiting the group's mobility - that is because the movement is massive, anywhere between 10,000 and 50,000 Canadian truckers. The convoy could easily shut down Ottawa this weekend.

Truckers are furious after a vaccine mandate that began on Jan. 15 required unvaccinated truckers crossing back into Canada to be tested and quarantined for a week. The US enacted a similar policy on Jan. 22. These two mandates instantly took 20% of the 160,000 cross-border American and Canadian truckers off the road due to noncompliance in both countries.

Joe Rogan sums it up, Canada "is in revolt."

The convoy is expected to reach Ottawa in the next 48 hours. 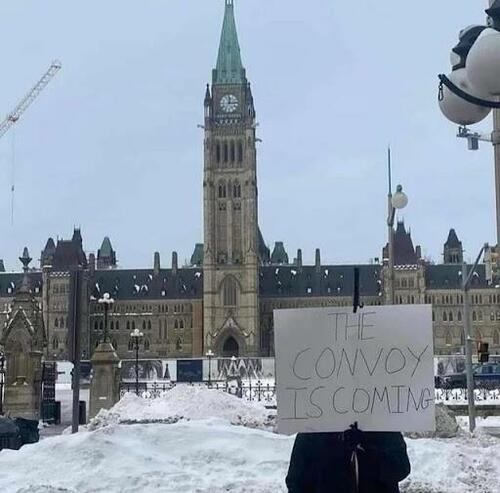 Posted by Crush Limbraw at 9:22 AM