US should not misjudge ‘rare warning’ from China on Taiwan question: Global Times editorial - Global Times 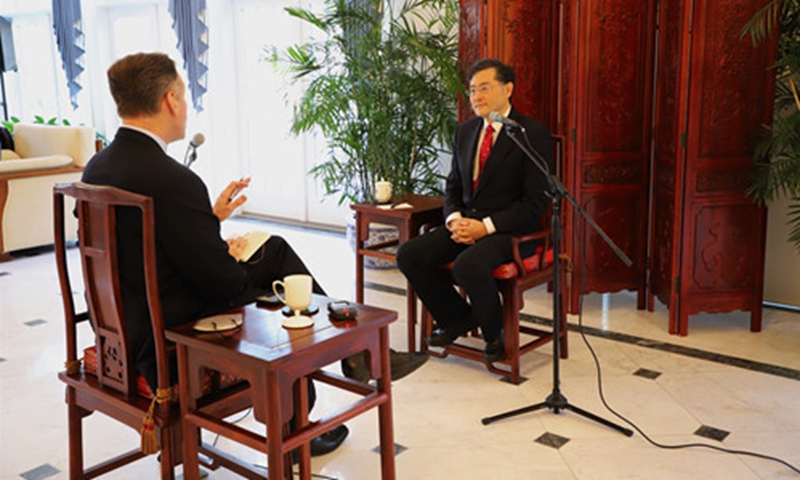 Photo: Chinese embassy in US

In a recent interview with US media, Chinese Ambassador to the US Qin Gang said that if the Taiwan island authority, emboldened by the US, keeps going down the road for independence, it would most likely involve China and the US "in a military conflict." He also compared the Taiwan question to "the biggest tinderbox" between China and the US.The ambassador's words sent shockwaves to the US. US media believe this is a rare and direct warning from Chinese mainland to the US and Taiwan.This was the first one-on-one interview of Qin as China's ambassador to the US, and the audience was the Americans. The views he expressed were not only a clear signal to US political elites - he warned them not to continue to play with fire on the Taiwan question or they will face dire consequences - he also intended to let more Americans realize the seriousness of the consequences of "using Taiwan to contain the Chinese mainland" and who the real destroyer of peace and stability in the Taiwan Straits is.US society urgently needs to wipe out ignorance about the Taiwan question, one that concerns China's core interests and the national feelings of the Chinese people. The extensive provocations by the US in the Taiwan Straits have accumulated enormous risks, but such a sensitive situation has not received enough attention in the US. US politicians and elites just play dumb, and under their misguidance, the American public either does not know the seriousness of the Taiwan question or cannot tell right from wrong. This contrast entails risks.   In response to Ambassador Qin's view, some Republican senators said the US cannot allow China to continue "bullying the US and its allies." Some US netizens claimed, "Threatening your biggest trading partner is a poor strategy. China already dominates the entire region economically, there's no cause for saber waving," and "Now it is the US turn to warn China."How could it become "China bullies the US?" This is a trick of a thief crying "stop thief." The senators' remarks are political manipulation with ulterior motives, and the netizens' comments are based on egotism from ignorance. The joint effect twists and poisons US opinion about China, leading to Washington's continuous irrational China policy.Americans should not be cheated anymore. There should be voices from the outside that tell them the truth about China-US relations and the world.Americans feel surprised at the words of Ambassador Qin Gang because they neither understand nor attach importance to the situation around the Taiwan Straits and the Chinese mainland's policy toward Taiwan. In fact, for the Chinese, the ambassador just gave a clearer description of the policy and shifted the focus a bit.The official stance of the Chinese mainland toward the Taiwan question is this: China will strive for the prospects of peaceful reunification with utmost sincerity and greatest efforts, but will not commit to giving up non-peaceful means. The ambassador not only reiterated the first part, but also highlighted the second half by making clear that the consequence of playing with fire is a military conflict between China and the US. This targeted the constant maneuvers by the US in the Taiwan Straits that attempt to intrude the red line of the one-China principle. Since some Americans pretend to be deaf, we can only raise our volume. If the US continues to discard warnings from China, it will face more tensions, crises and even conflicts in the Taiwan Straits.China and the US used to have consensus on the Taiwan question, with the three joint communiqués as the guardrail. The Taiwan Straits has remained peaceful and stable in the past 40 years. But now the US is smashing the guardrail and trying to break China's bottom line with "salami-slicing" tactics to make "Taiwan independence" a more public topic. China will not sit still. Behind China's warning is the strong will and powerful strength of the Chinese nation to safeguard the unity of the country, and the US must take note - or else, Washington's strategic arrogance will only drag the US into more tense strategic unpreparedness. The interests of China and the US are highly intertwined. Both will benefit from a harmonious relationship, or face the consequences because of conflicts. The US agrees that bilateral relations should advance instead of being messed up. It once said it does not want a new cold war with China. The US should put its words into action. Ambassador Qin expressed this attitude in his interview. Hopefully, the US can have a serious, comprehensive and correct understanding of the bilateral relations and does not go further on its wrong path.
https://www.globaltimes.cn/page/202201/1250235.shtml
Posted by Crush Limbraw at 9:59 AM