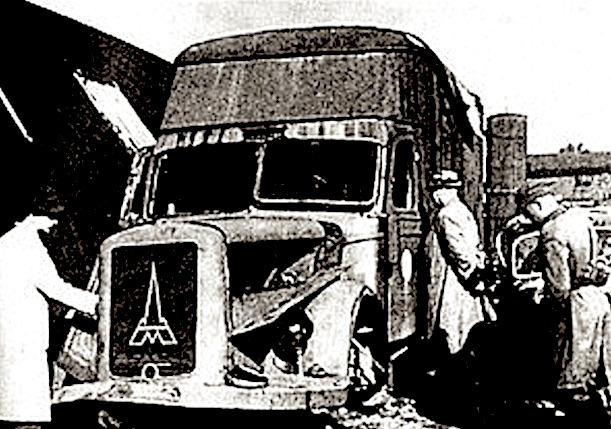 According to official Holocaust propagandists, the “Nazi” inspiration for the Gas Chambers™ at Auschwitz allegedly evolved from an earlier — and far more inefficient — mode of mass execution which involved cramming prisoners in the back of a truck, redirecting the exhaust pipe into the cargo compartment, and “gassing” the prisoners to death by driving around town for about half an hour.

Unfortunately for the propagandists, they didn’t realize that the diesel engines from these German Sauer BT4500 trucks did not produce enough carbon monoxide gas to kill people — the same problem the Gas Chamber™ propagandists created for themselves when they claimed that the “Nazis” used a diesel submarine engine at Treblinka to allegedly “gas” a million Jews there.

As it turns out with everything concerning the Holocaust, the Jews had merely accused the Germans of what they themselves had been doing — a penchant for deflection and lying that even the British Information Ministry was acutely aware of, according to 1944 declassified documents. The Bolshevik Jews would accuse their enemies of atrocities that they themselves had already committed.

Leading up to World War II, Bolshevik Jews had perpetrated the greatest single mass murder in the history of the world — the Holodomor — when they liquidated tens of millions of Ukrainians after stealing their land under the guise of “collectivization.” Their preferred method of murder was mass starvation, but those who resisted or spoke out against it were summarily “tried” as “counter-revolutionaries” (i.e., “antisemites”) — and executed.

In his book 200 Years Together, Nobel-prize-winning author Alexandr Solzhenitsyn revealed that the Jewish-dominated Troika — kangaroo courts — had handed down so many death sentences that they needed a find a way to carry out mass executions without alerting the public — so in steps enthusiastic Jewish mass murderer Isai Davidovich Berg:

…And from the astonishing disclosure in 1990 we learned that the famous “mobile gas chambers” were invented — as it turns out — not by Hitler during World War II, but [rather] the Soviet NKVD in 1937 by Isai Davidovich Berg, the head of the administrative and maintenance section of the NKVD of Moscow Oblast (sure, he was not alone in that enterprise, but he organized the whole business).

This is why it is also important to know who occupied middle-level posts. It turns out, that I.D. Berg was entrusted with carrying out the sentences of the “troika” of the NKVD of Moscow Oblast; he dutifully performed his mission, which involved shuttling prisoners to the execution place. But when three “troikas” began to work simultaneously in the Moscow Oblast, the executioners became unable to cope with the sheer number of executions.

Then they invented a time-saving method: the victims were stripped naked, tied, mouths plugged, and thrown into a closed truck, outwardly disguised as a bread truck. On the road the exhaust fumes were redirected into the prisoner-carrying compartment, and by the time the van arrived to the burial ditch, the prisoners were “ready.” (Well, Berg himself was shot in 1939 — not for these evil deeds — of course, but for “the anti-Soviet conspiracy.” In 1956, he was rehabilitated without any problem, — though the story of his murderous invention was kept preserved and protected in the records of his case and only recently discovered by journalists). (p. 264)

Note how the van “gassing” didn’t actually kill the prisoners — they purpose was to merely weaken them so that they could then be lined up along the edge of one of the execution trenches they were famous for — which, again, they accused the “Nazis” of, such as at Babi Yar ravine.

But it really shouldn’t be surprising to anyone that Jewish Holocaust “historians” have had to resort to such fakery of evidence — considering that Ephraim Kaye — the head of the Yad Vashem Holocaust Museum in Israel — has candidly admitted that there is, in fact, a complete lack of physical evidence to prove the Holocaust even happened.

And it isn’t just Ephraim Kaye who has admitted to this dearth of evidence — Dejan Ristic, the acting director of the Museum of Genocide in Belgrade, Serbia — admitted the exact same thing — no proof of the Holocaust.

Ironically, because of this awkward lack of evidence of the Holocaust, whenever new mass graves of Ukrainians are discovered from the Holodomor genocide — and other Bolshevik mass murderers — Jewish “historians” take control of the site and claim the remains are Jews Murdered By Nazis™ instead.

Even mainstream Holocaust historians have been forced to admit that no functional mobile gas van nor parts of one have ever been discovered — which is remarkable considering how widely used they allegedly were at one time.

And the only alleged photo of such a “gas van” shows no indications of the necessary modifications that we would expect to see — and even Yad Vashem Museum admits they have no photos of one in their archives.

Again, Jews have never let the lack of evidence get in the way of a good story — as the patron saint of the Holocaust — Eli Wiesel — explained the Talmudic writing process:

“In [my] book “One Generation After” there is a sentence which perhaps explains my idea: “Certain events happen, but they are not true. Others, on the other hand, are, but they never happen.” So! I undergo certain events and, starting from my experience, I describe incidents which may or may not have happened, but which are true. I do believe that it is very important that there be witnesses always and everywhere.”

Even if a Jew was too young to remember being at Auschwitz, that shouldn’t stop them from writing a book about their “experience” — after all, what’s important is that it could have happened, not that it actually happened.