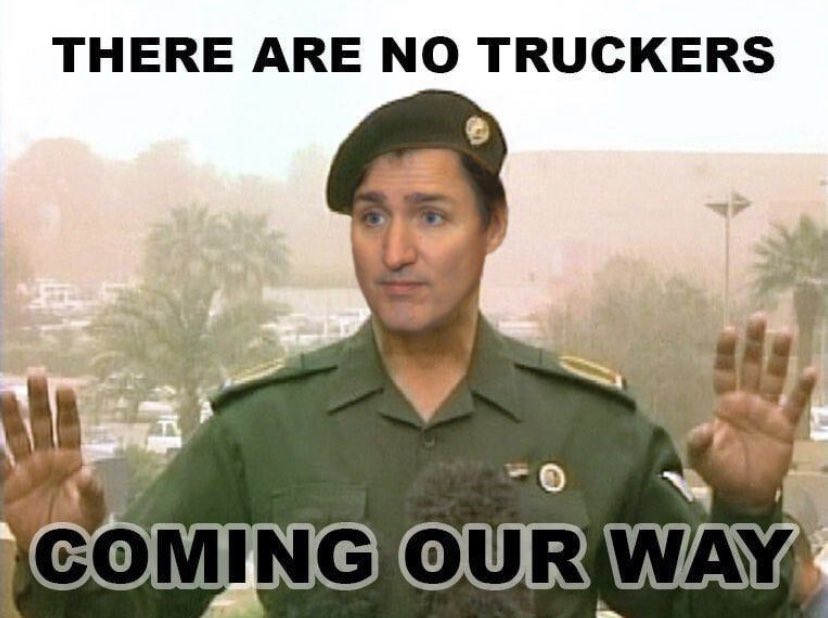 The Canadian trucker rebellion, rolling east across the vast, frozen Canadian prairie, blew into the country’s Woked-up capital city, Ottawa, like the scalding wrath of history, forcing Prime Minister Justin Trudeau to skulk off punkishly under cover of night — after bad-mouthing the big-rig invaders as “a fringe minority” in a nation of otherwise obedient hypnotics sleepwalking into Big Pharma’s spike-protein fun-factory of all-causes early death.

The news media is working super-hard to avoid reporting the event, of course. Canada’s leading paper, The Toronto Star, put up a peevish little item complaining that a protester hung an upside-down maple leaf flag on a statue of national hero Terry Fox (a cancer-stricken athlete who ran across most of the country on a prosthetic leg in 1981 to raise cancer-awareness). The paper also mentioned that “[a] discordant symphony of truck horns blared across downtown Ottawa as demonstrators geared up for their second full day on local streets.” Beyond that, the paper lost interest.

Canada under the Trudeau government has been more restrictive on Covid-19 than the Big Gorilla to its south, with the population compliantly following all the insane, economy-wrecking rules, until a recent mandate to vaxx-up every last trucker in the land finally sparked-off a revolt. Mr. Trudeau’s Liberal Party failed to win a parliamentary majority in last September’s federal election, and he heads a flimsy coalition potentially facing a no-confidence vote that would drive the PM out of office.

For now, the truckers seem determined to stick around and disrupt the Canadian capital. Their estimated 50,000 rigs could surround the city and create siege conditions, where food supplies and other goods won’t get in, starving the government into surrendering on its mandates and restrictions. So far, the local Ottawa police have stood by with a very light hand, and there are rumors that they are on the same page as the truckers against federal overreach.

Will Mr. Trudeau resort to using the military to break up the revolt? Good luck with that. Like virtually every other “advanced” nation, Canada depends on trucks and truckers to move everything needed for everyday life. The truckers can just say no… we don’t feel like working this month. No poutine or Cornish pasties for you, Ottawa! Then what? Throw them all in jail? How will that help move stuff from Point A to Point B? It kind of looks like they have Mr. T over a Molson barrel. For now, it’s a stand-off, but it looks to me like the Prime Minister must resign and whoever takes charge next will have to rapidly rethink the country’s entire Covid-19 policy in a not-insane direction. The Canadian revolt appears to be inspiring similar operations in the US, where a movement has started for a massive trucker convoy from California to Washington, DC — the swampy pivot-point of Covid tyranny under the phantasm known as “Joe Biden” — as a very general way of saying we’ve had enough of being pushed around by political grifters and their bureaucratic subalterns.

The Covid-19 saga gets darker every day, while the official alibis, cover-stories, and disinfo ops bend ever deeper toward an arc of criminality. The US government has lied about every plot-line in the two-year horror show. In fact, a conscientious observer would have to conclude the following: That the government’s highest-paid employee, Dr. Anthony Fauci, led surreptitiously in the creation and release of a bioweapon; that he and his cohorts, along with the pharma companies, and other interested parties such as the Bill and Melinda Gates Foundation and the World Health Organization, enabled the release of so-called “vaccines” (genetic treatments) that were at least as deadly as the disease itself; that as a result of the shots many people of all ages will die before their natural time; that the process is already underway as documented in the all-causes death data tallied by insurance companies; that the same government officials maliciously suppressed viable, inexpensive, FDA-approved treatments for Covid-19 in order to herd the populace into receiving dangerous “vaccines”; that said officials have worked strenuously to muddle and fake the statistics that would show who is actually dying of what; and that the entire fiasco appears to have been ginned up in order to systematically control the population in ways contrary to our natural rights while killing off a substantial number of us.

Let the trucks roll from Fresno to DC if they still want to play rough. Think the “Joe Biden” gang will try to divert attention by starting a war in Ukraine? They don’t dare. Think the financial markets will tank? Well, of course they will, no matter what, because the markets and the money are detached from reality. Face it: what America needs most of all is to reconnect with reality, and you can be sure that the process will be uncomfortable, having sojourned so far from it for so long. (“Let’s Go, Brandon!”) And Let’s go, Canadian truckers!