The four policemen charged in George Floyd’s death acted entirely according to the training and guidance provided them by the Minneapolis Police Department.

It is said that, in every large organization, the fecal matter flows downhill. Anyone who has ever worked in government can attest to the truth of that statement. But, for dramatic proof of that proposition, take a look at this picture. 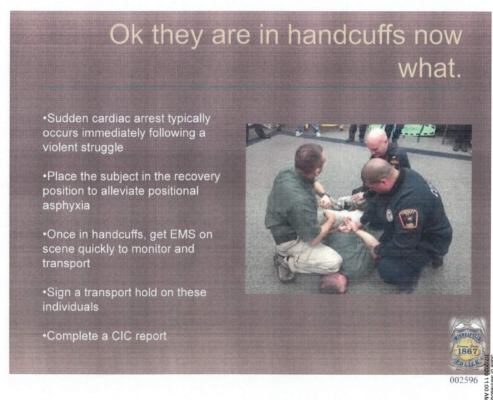 This is an illustration from the Minneapolis Police Department’s official training materials on how to safely and properly subdue a suspect suffering from “excited delirium,” a potentially lethal medical condition which, due to the rising use and abuse of illicit drugs, has grown to epidemic proportions on the streets of America.

Look closely. The depicted suspect is flat on the ground with his head turned to the side in what the illustration calls “the recovery position to alleviate positional asphyxia.” The officer on the left is kneeling on the side of the suspect’s neck.

Could this and related parts of the officially approved and mandated Minneapolis Police Department (MPD) training curriculum be why former Minneapolis Police Officer Derek Chauvin saw fit to kneel on the side of George Floyd’s neck? And could it be the reason why former officers Thomas Lane, J. Alexander Kueng, and Tou Thao assisted Chauvin as he knelt on the side of Floyd’s neck?

As will be explained in detail below, throughout Floyd’s confrontation with the police, he was at imminent risk of death from sudden cardiac arrhythmia caused by excited delirium. So it was that these officers followed the MPD’s official procedures for how to properly and safely subdue someone in that life-threatening condition. In doing so, they were not only keeping Floyd in the prescribed “recovery position” to alleviate his risk of asphyxiation, they were also keeping an agitated and delirious Floyd from harming himself as they awaited the arrival of the ambulance that they had twice summoned to provide medical aid to him.

So where are these well-intentioned, well-trained, and dutiful public servants today? They are in jail awaiting trial on murder and aiding and abetting charges after having been universally condemned in the news media and used by neo-Marxists and opportunistic criminals across the country as a pretext to riot, loot, and burn. And, while they sit in their cells, not one Minneapolis official, from Mayor Jacob Frey to Police Chief Medaria Arradondo or any member of City Council, has come forward to acknowledge that, in subduing Floyd, these law officers were acting in meticulous accordance with the MPD training and directives designed to reduce the risk of harm to persons suffering excited delirium.

In fact, after Chauvin, Lane, Kueng, and Thao were summarily fired by the MPD, Chief Arradondo apologized to Floyd’s family and acknowledged his department’s purported role in creating “the deficit of hope” that he claims existed in Minneapolis even prior to Floyd’s death.

“I am absolutely sorry for the pain, the devastation and trauma that Mr. Floyd’s death has left on his family, his loved ones, our community in Minneapolis and certainly across the country and the world,” Chief Arradondo announced in a news conference.

For its part, the Minneapolis City Council has acted to defund and dismantle the police department.

All of this, mind you, from the very officials who are ultimately responsible for the training and directives that the defendant officers followed to the letter in their attempt to safely subdue Floyd, who was under the influence of a massively lethal overdose of fentanyl and exhibiting the unmistakable signs of the deadly excited delirium.

By their hypocrisy and cowardice, these blame-shifting public officials, desperate to preserve their political careers and places at the public trough, have tossed these police officers to the howling mob.

As I explained in my recent American Spectator article “Who Killed George Floyd?,” “the physical, scientific, and electronically recorded evidence in the case overwhelmingly and conclusively proves that these defendants are not guilty of the charges and, in fact, played no material role in bringing about Floyd’s death.”

That article spelled out in detail certain key facts, including, but not limited to, the following:

(Read full text at link below.)

As I have tried to make clear, by calling twice for an ambulance, the officers did all that they could to, in the words of the above training illustration, combine their “law enforcement control measures” with “immediate sedative medical intervention to attempt to reduce the risk of death.” In short, the brief and disturbing video that launched a thousand riots did not show police officers brazenly and sadistically killing Floyd. It in fact showed them following their training to do the best they could to save Floyd from the consequences of his own self-destructive behavior and drug abuse.

In terms of the criminal charges against them, the very existence of the foregoing MPD training materials and protocols and the defendants’ strict adherence to them in their treatment of Floyd refute any notion that they had criminal intent or desire to cause him harm. The officers’ compliance with their official training proves just the opposite.

Despite the fact that these wrongfully accused men deserve to have all charges dismissed immediately, it would be the rare judge indeed with enough courage and integrity to call a halt to this hideously ill-conceived and corrupt prosecution. Their fate most likely will come down to the roll of the dice in a jury trial. That they will be forced to gamble their liberty in such a torturous and unpredictable game of chance is in and of itself an outrage and disgrace.

But, beyond the fate of these innocent defendants, there are broader questions to be asked. To what extent did Minneapolis officialdom’s cowardly and hypocritical rush to abandon and condemn these police officers lend credibility to the neo-Marxist lie that “All Cops Are Bastards” and fuel the anti-police passions that have been stoked by professional agitators across the nation? Would the agitators have been so successful in causing nationwide mayhem if Mayor Frey, Chief Arradondo, or even a single member of the Minneapolis City Council had publicly acknowledged the plain, undeniable truth that, far from murdering Floyd, these police officers were acting pursuant to their official MPD training to reduce his risk of sudden death? Could that possibly have given the frenzied news media pause or helped to counter the anti-police propaganda?

Think about those questions and the possible answers the next time another George Floyd memorial riot breaks out.

George Parry is a former federal and state prosecutor. From 1978 to 1983 he was the Chief of the Police Brutality/Misconduct Unit of the Philadelphia District Attorney’s Office, which investigated and prosecuted use of deadly force by police. He blogs at knowledgeisgood.net and may be reached by email at kignet1@gmail.com.