With small businesses going bust at breakneck speeds and a quarter of all US income derived from the government, it just makes you wonder if this was all planned...

The virus-induced recession has resulted in deep economic scarring that will be seen for years. Tens of millions of Americans remain unemployed, broke, and hungry. US bankruptcies of large companies are on pace to hit a 10-year high, with even more devastation seen among smaller firms.

The collapse of small business is absolutely shocking, considering firms with under 500 employees account for about 44% of US economic activity.

Bloomberg notes a "wave of silent failures goes uncounted in part because real-time data on small business is notoriously scarce, and because owners of small firms often have no debt, and thus no need for bankruptcy court."

"Probably all you need to do is call the utilities and tell them to turn them off and close your door," said William Dunkelberg, chief economist for the National Federation of Independent Business.

Dunkelberg warned: Small business closures "are going to be well above normal because we're in a disastrous economic situation."

Yelp's latest data on business activity shows more than 80,000 companies permanently shuttered operations from March 1 to July 25. What's concerning is that 60,000 of these closings were small firms. 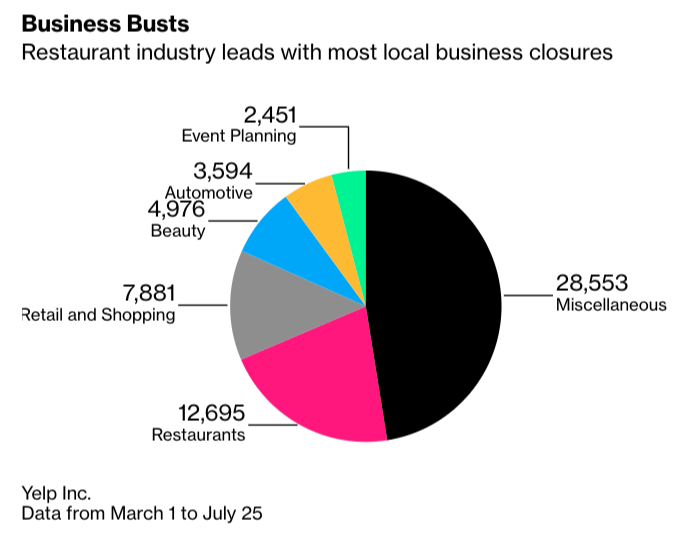 We recently pointed out small restaurants across the country have listed their eateries for sale on Facebook Marketplace. The number of listings is stunning, a clear indication the bust cycle is far from over. Another round of closures could be seen later this year, or into next, as the recovery reverses and fears of a double-dip recession materialize.

A July report from the US Chamber of Commerce survey showed 58% of small business owners are worried about permanently closing. The problem today is that the economic recovery stalled in June and has started to reverse, a fiscal cliff has been festering underneath the surface in August, which could result in lower consumption among tens of millions of Americans that would pressure businesses sales.

A combination of firms going bust and depressionary unemployment levels have tremendous spillover effects in the mostly dominated consumer-driven economy.

President Trump's orders to provide more direct transfer payments to broke Americans have tremendous consequences; first, a quarter of all US income is derived from the government, and second, this transfer of wealth creates unsustainable artificial growth.

We outlined, in late July, how a decline or ending helicopter drops via President Trump's stimulus checks will have more significant fiscal cliff impacts on small towns with a lower standard of living than large metro areas.

With small businesses going bust at breakneck speeds and a quarter of all US income derived from the government, it just makes you wonder if this was all planned...