Africa Addio (Goodbye Africa) (1966), co-directed, co-edited, and co-authored by Gualtiero Jacopetti and Franco Prosperi of Mondo Cane fame, is a must-see red-pill documentary for race-realists. Filmed between 1963 and 1965 in Kenya, Tanganyika, Zanzibar, Rwanda, Angola, the Belgian Congo, and South Africa, Africa Addiochronicles the exit of the British and Belgian colonial powers from Africa, as well as the attempts of the Portuguese and South Africa whites to hold on.

Many of you will find it simply unbelievable, for reasons of style and content. Africa Addio is so superbly filmed and edited that it seems in places like a feature film, not a documentary. Riz Ortolani’s lush Morricone-like music, as well as the magic of Italian dubbing, reinforce this impression. But as far as I can tell, only one sequence was created entirely by the filmmakers, and obviously so: a graveyard with headstones for white farms in the Kenya highlands.

As for the content: the colonial worlds created by whites as well as the results of the African takeovers seem equally surreal.

In the Kenya highlands, British farmers recreated English country life, complete with fox hunts (although the quarry is an African runner carrying part of a frozen fox). The headquarters of a British wildlife rescue operation looks like a set from a Bond movie or The Thunderbirds. The beach in Capetown, with its high-rise hotels and beautiful blondes surfing and sunning, looks like California or Australia. Surely it must all have been staged. But no. White people actually did this.

The sequences in post-colonial Africa seem so surreal, terrifying, and deeply unflattering to blacks that that movie has been denounced as racist propaganda. It definitely leads to racist conclusions. But all of it appears to be real. Still, one wonders: If blacks really are that bad, why did whites ever settle there? Why did whites give blacks power over them? And why, in the name of all that is holy, are we allowing these people to colonize us today? But again, it is all real.

The first thirty minutes focus mostly on Kenya. We see the trial of Mau Mau terrorists and their accomplices, who slaughtered white families and mutilated their cattle. They also tortured and killed baboons, for no fathomable reason. They are sentenced to life in prison. A few years later, Jomo Kenyatta pardoned the Mau Mau. The white farmers of the Kenya highlands are forced to sell. We see their houses and European treasures being auctioned off by Indian merchants. Then we see their yards and gardens being bulldozed, their trees dynamited, to create subsistence gardens for hundreds of blacks, who fill the European houses to overflowing, covering everything in filth and smoke, and slowly dismantling the houses to burn in their fireplaces—since it is easier than fetching wood, and it does not occur to them that at some point, the house will become unlivable. In a stunning sequence, we see Boer farmers from South Africa who settled in Kenya returning home with their herds the way they came: in covered wagons.

In colonial Kenya, blacks could look at white women but not touch. In free Kenya, blonde British nannies become a status symbol for the black elites, and an old blonde whore does a strip tease for a roomful of sweaty blacks. At the end, she offers “Bwana” the privilege of popping off her pasties. Unreal? No.

Africa Addio is filled with unflattering contrasts between blacks and whites. The white colonists are remarkably good-looking in Kenya, Angola, the Congo, and South Africa. The Africans, many filmed in extreme closeups, are often hideously ugly, with alarmingly discolored eyes and teeth. The filmmakers could be accused of seeking out exceptionally attractive whites and ugly Africans, but there are a lot of goofy and plain-looking whites as well. There are scenes of European order and grace: soldiers on parade—a ceremony in a church where the former colonial flags are being entrusted to the clergy—contrasted with noisy crowds of Africans swarming and rioting. We cut from disciplined and well-dressed British soldiers to clownish, shambling African troops and policemen. Post-colonial Africa began as a farce, a grotesque parody of European civilization.

The bodies of Arabs killed in the violence following the Zanzibar Revolution as photographed by the <i>Africa Addio</i> film crew. Credit: Wikimedia Commons

Then it descended into tragedy. Throughout the continent, African rebel groups, usually backed by the USSR or Communist China, used terrorism to eject whites. Then, once the whites were gone, they went on to massacre their tribal enemies. In Zanzibar and Tanganyika, the enemy was “Arabs,” meaning fellow Africans who had converted to Islam under the rule of Arab slave traders along the East African Coast. In 1964, the newly independent government of Zanzibar was overthrown by a Communist-backed revolution, and up to 20,000 Arabs were massacred. The filmmakers hired a plane in Tanganyika to document what was happening. They were fired upon when they tried to land but over two days managed to film from the air burned out villages, columns of Arabs been marched to their deaths, as well as mass graves and random heaps of corpses. One day, we see pitiful refugees fleeing to the beaches; the next day the beach is littered with countless corpses. It seems that genocide is part of every Communist revolutionary playbook. That would include the playbooks of the communists that Donald Trump is allowing to run amok in America today.

The filmmakers were on the ground during the Arab massacres in Tanganyika. At one point, they were pulled from their car by soldiers and put against a wall. They were about to be shot when someone looked at their passports and said. “Wait, these aren’t whites. They’re Italians.” The birth of a meme?

We also visit Rwanda, where we see the aftermath of a genocide of Hutus against Watusis. I guess there were many. We see Watusi survivors and their cattle streaming into exile in Uganda, as well as rivers choked with the corpses of those who were not so lucky. It is slick and cinematic, but the blood and bodies were real.

In the Belgian Congo, we see European troops and mercenaries repelling rebels who seized Stanleyville. The aftermath is sickening. The rebels had raped, killed, and tortured white nuns, nurses, and schoolchildren. They had also tortured, killed, and sometimes eaten 12,000 fellow Africans. We see European families who had narrowly escaped rape, torture, and death. Later, the filmmakers fly over a mission school where the rebels were holding nuns and children. A few days later, the mission has been burned to the ground. The grounds are littered with the corpses of nuns. Fortunately, the rebels were rather easy to defeat. They believed that magic made them immune to bullets. We see close up that this is not so as we witness the summary execution of two rebels. The filmmakers were actually accused of staging these murders, as if the Africans needed any incentive given the carnage we have seen already.

Two sequences deal with the mass slaughter of wildlife after whites pulled out and could no longer protect them. It is totally sickening. There are two kinds of hunters: whites and blacks. The white hunters are seen mowing down fleeing zebras by towing a rope between two jeeps. Another has a helicopter drive an elephant toward him before shooting it down. I have no patience for people who kill big game, even on sustainable game reserves, even if they are white. No, especially if they are white.

But the most sickening spectacle is of thousands of blacks cordoning off huge areas and killing everything that moves by chucking spears at them. The attempts of white conservationists to save the victims of the slaughter are touching but mostly futile. Again, you will wonder, “Can this be real?” But the blood is real, the fetal hippos and elephants ripped from their mothers’ wombs are real. 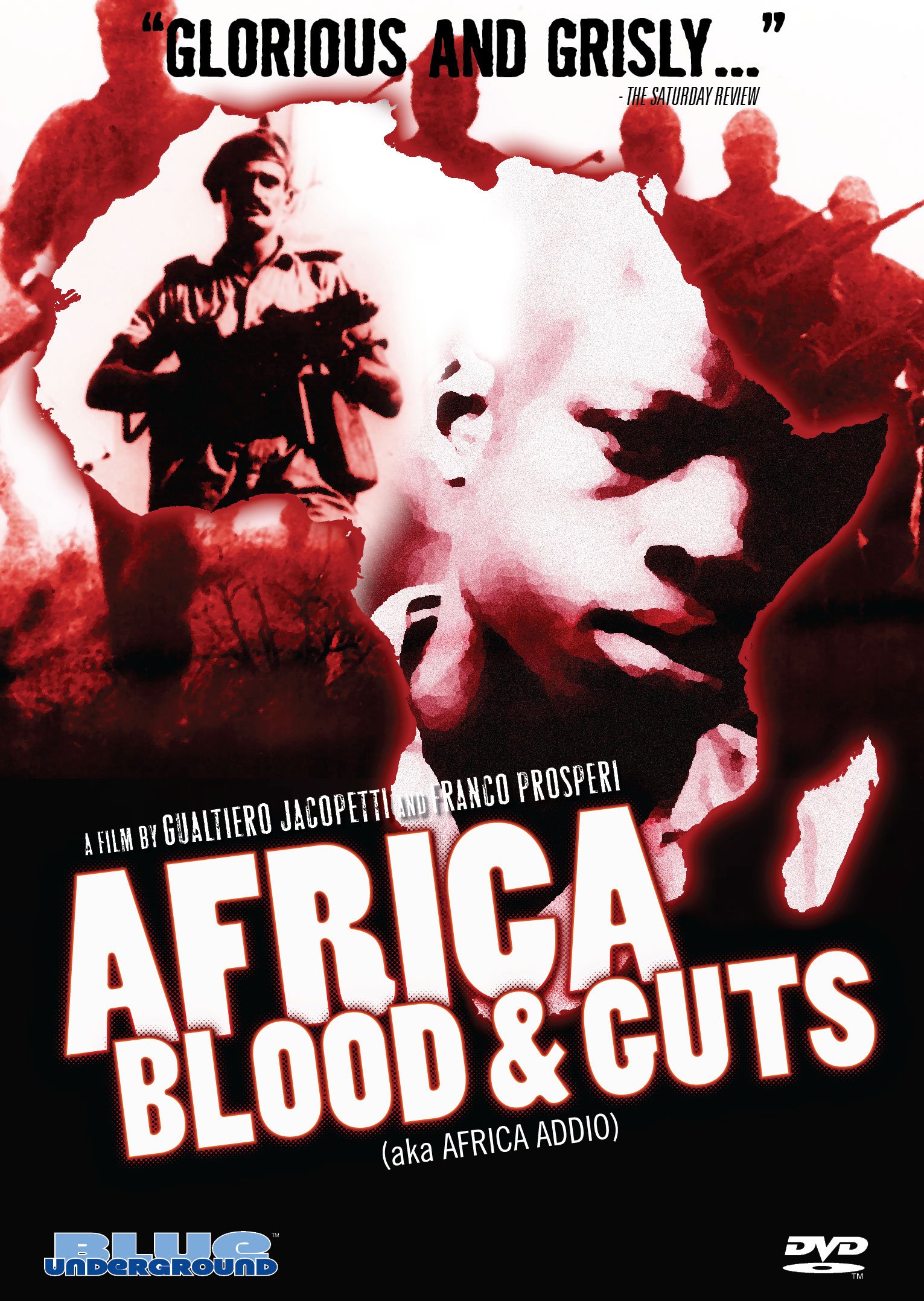 The final sequence is set in South Africa, Africa’s “sanctuary for whites.” It begins with a huge crowd of uniformed black children running toward a low set camera. The narrator declares that five blacks are born for every white in South Africa. It is a very effective way of communicating the demographic problem. Here comes the future!

We then visit the mines of Pretoria, where armies of blacks mine gold and diamonds. Although ordinary whites tried to build a nation in South Africa, it was always a colony, an economic zone in which a tiny oligarchy imported cheap nonwhite labor to heap up gold and diamonds. The lure of cheap labor plus high black fertility doomed South Africans to demographic eclipse and political impotence. The film ends with the Cape penguin colony, marooned far from their home in Antarctica. The analogy with whites is obvious. We never belonged there.

Africa Addio is a strange and sobering masterpiece. I highly recommend it as a tool for red-pilling young whites about race.