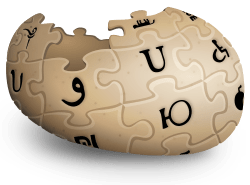 The Uncyclopedia logo. Maybe more appropriate for Wikipedia itself now.

Wikipedia’s “NPOV” is dead.1 The original policy long since forgotten, Wikipedia no longer has an effective neutrality policy. There is a rewritten policy, but it endorses the utterly bankrupt canard that journalists should avoid what they call “false balance.”2 The notion that we should avoid “false balance” is directly contradictory to the original neutrality policy. As a result, even as journalists turn to opinion and activism, Wikipedia now touts controversial points of view on politics, religion, and science. Here are some examples from each of these subjects, which were easy to find, no hunting around. Many, many more could be given.

Examples have become embarrassingly easy to find. The Barack Obama article completely fails to mention many well-known scandals: Benghazi, the IRS scandal, the AP phone records scandal, and Fast and Furious, to say nothing of Solyndra or the Hillary Clinton email server scandal—or, of course, the developing “Obamagate” story in which Obama was personally involved in surveilling Donald Trump. A fair article about a major political figure certainly must include the bad with the good. The only scandals that I could find that were mentioned were a few that the left finds at least a little scandalous, such as Snowden’s revelations about NSA activities under Obama. In short, the article is almost a total whitewash. You might find this to be objectively correct; but you cannot claim that this is a neutral treatment, considering that the other major U.S. party would treat the subject very differently. On such a topic, neutrality in any sense worth the name essentially requires that readers not be able to detect the editors’ political alignment.

Meanwhile, as you can imagine, the idea that the Donald Trump article is neutral is a joke. Just for example, there are 5,224 none-too-flattering words in the “Presidency” section. By contrast, the following “Public Profile” (which the Obama article entirely lacks), “Investigations,” and “Impeachment” sections are unrelentingly negative, and together add up to some 4,545 words—in other words, the controversy sections are almost as long as the sections about his presidency. Common words in the article are “false” and “falsely” (46 instances): Wikipedia frequently asserts, in its own voice, that many of Trump’s statements are “false.” Well, perhaps they are. But even if they are, it is not exactly neutral for an encyclopedia article to say so, especially without attribution. You might approve of Wikipedia describing Trump’s incorrect statements as “false,” very well; but then you must admit that you no longer support a policy of neutrality on Wikipedia.

I leave the glowing Hillary Clinton article as an exercise for the reader.

On political topics it is easiest to argue for the profound benefits—even the moral necessity—of eliminating bias in reference works. As I argue in my 2015 essay, “Why Neutrality,” we naturally desire neutrality on political and many other topics because we want to be left free to make up our own minds. Reference, news, and educational resources aimed at laying out a subject in general should give us the tools we need to rationally decide what we want to think. Only those who want to force the minds of others can be opposed to neutrality.

Wikipedia can be counted on to cover not just political figures, but political issues as well from a liberal-left point of view. No conservative would write, in an abortion article, “When properly done, abortion is one of the safest procedures in medicine,” a claim that is questionable on its face, considering what an invasive, psychologically distressing, and sometimes lengthy procedure it can be even when done according to modern medical practices. More to the point, abortion opponents consider the fetus to be a human being with rights; their view, that it is not safe for the baby, is utterly ignored. To pick another, random issue, drug legalization, dubbed drug liberalization by Wikipedia, has only a little information about any potential hazards of drug legalization policies; it mostly serves as a brief for legalization, followed by a catalog of drug policies worldwide. Or to take an up-to-the-minute issue, the LGBT adoption article includes several talking points in favor of LGBT adoption rights, but omits any arguments against. On all such issues, the point is that true neutrality, to be carefully distinguished from objectivity, requires that the article be written in a way that makes it impossible to determine the editors’ position on the important controversies the article touches on.

What about articles on religious topics? The first article I thought to look at had some pretty egregious instances of bias: the Jesus article. It simply asserts, again in its own voice, that “the quest for the historical Jesus has yielded major uncertainty on the historical reliability of the Gospels and on how closely the Jesus portrayed in the Bible reflects the historical Jesus.” In another place, the article simply asserts, “the gospels are not independent nor consistent records of Jesus’ life.” A great many Christians would take issue with such statements, which means it is not neutral for that reason—in other words, the very fact that most Christians believe in the historical reliability of the Gospels, and that they are wholly consistent, means that the article is biased if it simply asserts, without attribution or qualification, that this is a matter of “major uncertainty.” In other respects, the article can be fairly described as a “liberal” academic discussion of Jesus, focusing especially on assorted difficulties and controversies, while failing to explain traditional or orthodox views of those issues. So it might be “academic,” but what it is not is neutral, not in the original sense we defined for Wikipedia.

Of course, similarly tendentious claims can be found in other articles on religious topics, as when the Christ (title) article claims,

Although the original followers of Jesus believed Jesus to be the Jewish messiah, e.g. in the Confession of Peter, Jesus was usually referred to as “Jesus of Nazareth” or “Jesus, son of Joseph”.[11] Jesus came to be called “Jesus Christ” (meaning “Jesus the Khristós”, i.e. “Jesus the Messiah” or “Jesus the Anointed”) by later Christians, who believe that his crucifixion and resurrection fulfill the messianic prophecies of the Old Testament.

This article weirdly claims, or implies, a thing that no serious Biblical scholar of any sort would claim, viz., that Jesus was not given the title “Christ” by the original apostles in the New Testament. These supposed “later Christians” who used “Christ” would have to include the apostles Peter (Jesus’ first apostle), Paul (converted a few years after Jesus’ crucifixion), and Jude (Jesus’ brother), who were the authors of the bulk of the epistles of the New Testament. “Christ” can, of course, be found frequently in the epistles.3 Of course, those are not exactly “later Christians.” If the claim is simply that the word “Christ” does not appear much in the Gospels, that is true enough (though it can be found four times in the book of John), but it is also a reflection of the fact that the authors of the Gospels instead used “Messiah,” and quite frequently; the word means much the same as “Christ.” For example, he is called “Jesus the Messiah” in the very first verse of the New Testament (Matthew 1:1). Clearly, these claims are tendentious and represent a point of view that many if not most Christians would dispute.

It may seem more problematic to speak of the bias of scientific articles, because many people do not want to see “unscientific” views covered in encyclopedia articles. If such articles are “biased in favor of science,” some people naturally find that to be a feature, not a bug. The problem, though, is that scientists sometimes do not agree on which theories are and are not scientific. On such issues, the “scientific point of view” and the “objective point of view” according to the Establishment might be very much opposed to neutrality. So when the Establishment seems unified on a certain view of a scientific controversy, then that is the view that is taken for granted, and often aggressively asserted, by Wikipedia.

The global warming and MMR vaccine articles are examples; I hardly need to dive into these pages, since it is quite enough to say that they endorse definite positions that scientific minorities reject. Another example is how Wikipedia treats various topics in alternative medicine—often dismissively, and frequently labeled as “pseudoscience” in Wikipedia’s own voice. Indeed, Wikipedia defines the very term as follows: “Alternative medicine describes any practice that aims to achieve the healing effects of medicine, but which lacks biological plausibility and is untested, untestable or proven ineffective.” In all these cases, genuine neutrality requires a different sort of treatment.

Again, other examples could be found, in no doubt thousands of other, perfectly unexciting topics. These are just the first topics that came to mind, associated as they are with the culture wars, and their articles on those topics put Wikipedia very decidedly on one side of that war. You should not be able to say that about an encyclopedia that claims to be neutral.

It is time for Wikipedia to come clean and admit that it has abandoned NPOV (i.e., neutrality as a policy). At the very least they should admit that that they have redefined the term in a way that makes it utterly incompatible with its original notion of neutrality, which is the ordinary and common one.4 It might be better to embrace a “credibility” policy and admit that their notion of what is credible does, in fact, bias them against conservatism, traditional religiosity, and minority perspectives on science and medicine—to say nothing of many other topics on which Wikipedia has biases.

Of course, Wikipedians are unlikely to make any such change; they live in a fantasy world of their own making.5

The world would be better served by an independent and decentralized encyclopedia network, such as I proposed with the Encyclosphere. We will certainly develop such a network, but if it is to remain fully independent of all governmental and big corporate interests, funds are naturally scarce and it will take time.